The anterior pituitary hormones can be classified according to hormone structure and the types of receptors that they activate. Growth hormone (GH) and prolactin.

The anterior pituitary hormones can be classified according to hormone structure and the types of receptors that they activate. Growth hormone (GH) and prolactin, single-chain proteinhormones with significant homology, form one group. Both hormones activate receptors of the JAK/STAT superfamily.

Finally, adrenocorticotropic hormone (ACTH), a single peptide cleaved from a larger precursor that also contains the peptide β-endorphin , represents a third cat-egory. Like TSH, LH, and FSH, ACTH acts through a G protein-coupled receptor. A unique feature of the ACTH receptor (also known as the melanocortin 2 receptor) is that a transmembrane protein, melanocortin 2 receptor accessory protein, is essential for normal ACTH receptor trafficking and signaling.

TSH, FSH, LH, and ACTH share similarities in the regulation of their release from the pituitary. Each is under the control of a distinctive hypothalamic peptide that stimulates their production by acting on G protein-coupled receptors (Table 37–1). TSH release is regulated by thyrotropin-releasing hormone (TRH), whereas the release of LH and FSH (known collectively as gonad-otropins) is stimulated by pulses of gonadotropin-releasinghormone (GnRH). ACTH release is stimulated by corticotro-pin-releasing hormone (CRH). An important regulatory featureshared by these four structurally related hormones is that they and their hypothalamic releasing factors are subject to feedback inhib-itory regulation by the hormones whose production they control. TSH and TRH production are inhibited by the two key thyroid hormones, thyroxine and triiodothyronine . Gonadotropin and GnRH production is inhibited in women by estrogen and progesterone, and in men by testosterone and other androgens. ACTH and CRH production are inhibited by cortisol. Feedback regulation is critical to the physiologic control of thy-roid, adrenal cortical, and gonadal function and is also important in pharmacologic treatments that affect these systems.

The hypothalamic hormonal control of GH and prolactin differs from the regulatory systems for TSH, FSH, LH, and ACTH. The hypothalamus secretes two hormones that regulate GH; growth hormone-releasing hormone (GHRH) stimulates GH production, whereas the peptide somatostatin (SST) inhibits GH production. GH and its primary peripheral mediator, insu-lin-like growth factor-I (IGF-I), also provide feedback to inhibitGH release. Prolactin production is inhibited by the catecholamine dopamine acting through the D2subtype of dopamine receptors.The hypothalamus does not produce a hormone that specifically stimulates prolactin secretion, although TRH can stimulateprolactin release, particularly when TRH concentrations are high in the setting of primary hypothyroidism. 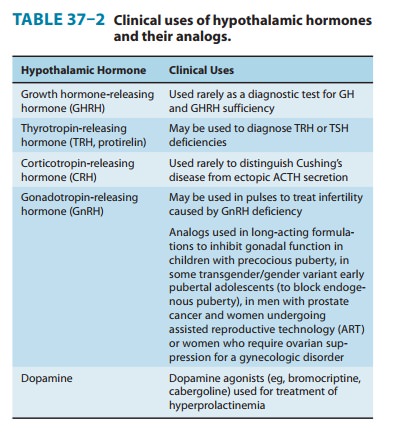 Whereas all the pituitary and hypothalamic hormones described previously are available for use in humans, only a few are of major clinical importance. Because of the greater ease of administration of target endocrine gland hormones or their synthetic analogs, the related hypothalamic and pituitary hormones (TRH, TSH, CRH, ACTH, GHRH) are used infrequently as treatments. Some, such as ACTH, are used for specialized diagnostic testing. These agents are described in Tables 37–2 and 37–3. In contrast, GH, SST, LH, FSH, GnRH, and dopamine or analogs of these hormones are commonly used and are described in the following text. 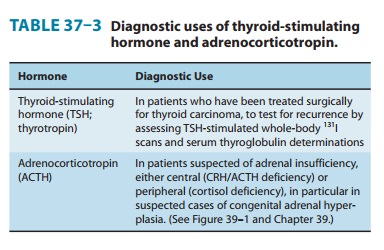