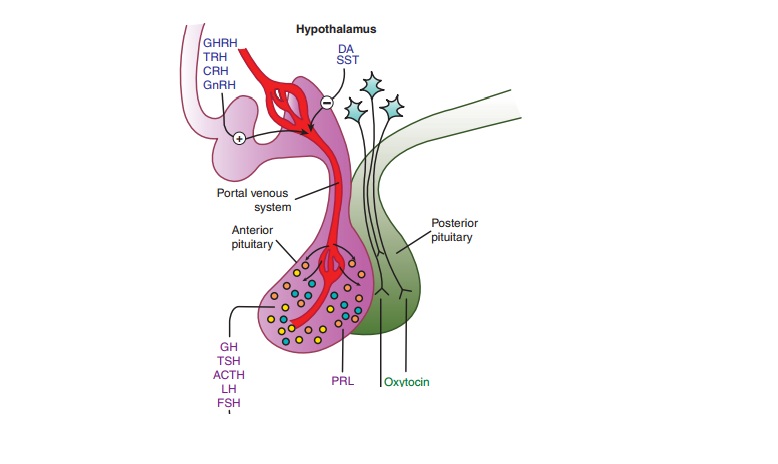 The control of metabolism, growth, and reproduction is mediated by a combination of neural and endocrine systems located in the hypothalamus and pituitary gland.

The control of metabolism, growth, and reproduction is mediated by a combination of neural and endocrine systems located in the hypothalamus and pituitary gland. The pituitary weighs about 0.6 g and rests at the base of the brain in the bony sella turcica near the optic chiasm and the cavernous sinuses. The pituitary consists of an anterior lobe (adenohypophysis) and a posterior lobe (neu-rohypophysis) (Figure 37–1). It is connected to the overlying hypothalamus by a stalk of neurosecretory fibers and blood vessels,including a portal venous system that drains the hypothalamus and perfuses the anterior pituitary. The portal venous system car-ries small regulatory hormones (Figure 37–1, Table 37–1) from the hypothalamus to the anterior pituitary.

The posterior lobe hormones are synthesized in the hypothala-mus and transported via the neurosecretory fibers in the stalk of the pituitary to the posterior lobe, from which they are released into the circulation.

Drugs that mimic or block the effects of hypothalamic and pituitary hormones have pharmacologic applications in three primary areas: (1) as replacement therapy for hormone deficiency states; (2) as antagonists for diseases caused by excess production of pituitary hormones; and (3) as diagnostic tools for identifying several endocrine abnormalities.

3-year-old boy [height 85 cm, –3 standard deviations (SD); weight 13 kg, approximately 10th percentile) presents with short stature. Review of the past history and growth chart demonstrates normal birth weight and birth length, but a progressive fall off in height velocity relative to age-matched normal ranges starting at 6 months of age. Physical examination demonstrates short stature and mild general-ized obesity. Genital examination reveals descended but small testes and a phallic length of –2 SD. Laboratory evaluation demonstrates growth hormone (GH) deficiency and a delayed bone age of 18 months. The patient is started on replacement with recombinant human GH at a dose of 40 mcg/kg/d subcutaneously. After 1 year of treatment, his height velocity has increased from 5 cm/yr to 11 cm/yr. How does GH stimulate growth in children? What other hormone deficiencies are suggested by the patient’s physical examination? What other hormone supplementation is this patient likely to require?

While GH may have some direct growth-promoting effects, GH is thought to mediate skeletal growth principally through epiphyseal production of insulin-like growth factor-I (IGF-I), which acts principally in an autocrine/paracrine manner. IGF-I may also promote statural growth through endocrine mechanisms. The findings of small testes and a microphallus in this patient suggest a diagnosis of hypogonadism, likely as a consequence of gonadotropin deficiency. This patient is at risk for multiple hypothalamic/pituitary deficiencies. This patient may already have or may subsequently develop ACTH/ cortisol and TSH/thyroid hormone deficiencies and thus may require supplementation with hydrocortisone and levo-thyroxine, in addition to supplementation with GH and testo-sterone. The patient should also be evaluated for the presence of central diabetes insipidus and, if present, treated with desmopressin, a V2 vasopressin receptor-selective analog.