The gonadotropins are produced by a single type of pituitary cell, the gonadotroph. These hormones serve complementary func-tions in the reproductive process. In women, the principal func-tion of FSH is to direct ovarian follicle development. Both FSH and LH are needed for ovarian steroidogenesis. In the ovary, LH stimulates androgen production by theca cells in the follicular stage of the menstrual cycle, whereas FSH stimulates the conver-sion by granulosa cells of androgens to estrogens. In the luteal phase of the menstrual cycle, estrogen and progesterone produc-tion is primarily under the control first of LH and then, if preg-nancy occurs, under the control of human chorionic gonadotropin (hCG). Human chorionic gonadotropin is a placental protein nearly identical with LH; its actions are mediated through LH receptors.

In men, FSH is the primary regulator of spermatogenesis, whereas LH is the main stimulus for testosterone synthesis in Leydig cells. FSH helps maintain high local androgen concentrations in the vicinity of developing sperm by stimulating the production of androgen-binding protein in Sertoli cells. FSH also stimulates the conversion by Sertoli cells of testosterone to estrogen.

FSH, LH, and hCG are available in several pharmaceutical forms. They are used in states of infertility to stimulate spermato-genesis in men and to induce ovulation in women. Their most common clinical use is for the controlled ovulation hyperstimula-tion that is the cornerstone of assisted reproductive technologies such as in vitro fertilization (IVF).

All three hormones—FSH, LH, and hCG—are heterodimers that share an identical α chain in addition to a distinct β chain that confers receptor specificity. The β chains of hCG and LH are nearly identical, and these two hormones are used interchange-ably. All the gonadotropin preparations are administered by sub-cutaneous or intramuscular injection, usually on a daily basis. Half-lives vary by preparation and route of injection from 10 to 40 hours.

The first commercial gonadotropin product was extracted from the urine of postmenopausal women, which contains a substance with FSH-like properties (but with 4% of the potency of FSH) and an LH-like substance. This purified extract of FSH and LH is known as menotropins, or human menopausal gonadotropins (hMG).

Three forms of purified FSH are available. Urofollitropin, also known as uFSH, is a purified preparation of human FSH extracted from the urine of postmenopausal women. Virtually all the LH activity has been removed through a form of immuno-affinity chromatography that uses anti-hCG antibodies. Two recombinant forms of FSH (rFSH) are also available: follitropinalfa and follitropin beta. The amino acid sequences of these twoproducts are identical to that of human FSH. They differ from each other and urofollitropin in the composition of carbohydrate side chains. The rFSH preparations have a shorter half-life than preparations derived from human urine but stimulate estrogen secretion at least as efficiently and, in some studies, more effi-ciently. The rFSH preparations are considerably more expensive.

Lutropin alfa, the recombinant form of human LH, was intro-duced in the United States in 2004. When given by subcutaneous injection, it has a half-life of about 10 hours. Lutropin has only been approved for use in combination with follitropin alfa for stimulation of follicular development in infertile women with profound LH deficiency. It has not been approved for use with the other preparations of FSH nor for simulating the endogenous LH surge that is needed to complete follicular development and pre-cipitate ovulation.

hCG is produced by the human placenta and excreted into the urine, whence it can be extracted and purified. It is a glycoprotein consisting of a 92-amino-acid α chain virtually identical to that of FSH, LH, and TSH, and a β chain of 145 amino acids that resembles that of LH except for the presence of a carboxyl terminal sequence of 30 amino acids not present in LH. Choriogonadotropin alfa (rhCG) is a recombinant form ofhCG. Because of its greater consistency in biologic activity, rhCG is packaged and dosed on the basis of weight rather than units of activity. All of the other gonadotropins, including rFSH, are pack-aged and dosed on the basis of units of activity. The preparation of hCG that is purified from human urine is administered by intramuscular injection, whereas rhCG is administered by subcu-taneous injection.

The gonadotropins and hCG exert their effects through G protein-coupled receptors. LH and FSH have complex effects on reproductive tissues in both sexes. In women, these effects change over the time course of a menstrual cycle as a result of a complex interplay between concentration-dependent effects of the gonadotropins, cross-talk between LH, FSH, and gonadal steroids, and the influence of other ovarian hormones. A coordinated pattern of FSH and LH secretion during the menstrual cycle (see Figure 40–1) is required for normal follicle development, ovula-tion, and pregnancy.

During the first 8 weeks of pregnancy, the progesterone and estrogen required to maintain pregnancy are produced by the ovarian corpus luteum. For the first few days after ovulation, the corpus luteum is maintained by maternal LH. However, as mater-nal LH concentrations fall owing to increasing concentrations of progesterone and estrogen, the corpus luteum will continue tofunction only if the role of maternal LH is taken over by hCG produced by the embryo and its new placenta.

The gonadotropins are used to induce ovulation in women with anovulation that is secondary to hypogonadotropic hypogo-nadism, polycystic ovary syndrome, obesity, and other causes. Because of the high cost of gonadotropins and the need for close monitoring during their administration, they are generally reserved for anovulatory women who fail to respond to other less com-plicated forms of treatment (eg, clomiphene;). Gonadotropins are also used for controlled ovarian hyperstimu-lation in assisted reproductive technology procedures. A numberof protocols make use of gonadotropins in ovulation induction and controlled ovulation hyperstimulation, and new protocols are continually being developed to improve the rates of success and to decrease the two primary risks of ovulation induction: multiple pregnancies and the ovarian hyperstimulation syndrome (OHSS; ).

Although the details differ, all of these protocols are based on the complex physiology that underlies a normal menstrual cycle. Like a menstrual cycle, ovulation induction is discussed in rela-tion to a cycle that begins on the first day of a menstrual bleed (Figure 37–3). Shortly after the first day (usually on day 3), daily injections with one of the FSH preparations (hMG, urofollitro-pin) are begun and are continued for approximately 7–12 days. In women with hypogonadotropic hypogonadism, follicle develop-ment requires treatment with a combination of FSH and LH because these women do not produce the basal level of LH that is required for adequate ovarian estrogen production and normal follicle development. The dose and duration of FSH treatment are based on the response as measured by the serum estradiol concen-tration and by ultrasound evaluation of ovarian follicle develop-ment and endometrial thickness. When exogenous gonadotropins are used to stimulate follicle development, there is risk of a pre-mature endogenous surge in LH owing to the rapidly changing hormonal milieu. To prevent this, gonadotropins are almost always administered in conjunction with a drug that blocks the effects of endogenous GnRH—either continuous administration of a GnRH agonist, which down-regulates GnRH receptors or a GnRH receptor antagonist (see below and Figure 37–3). 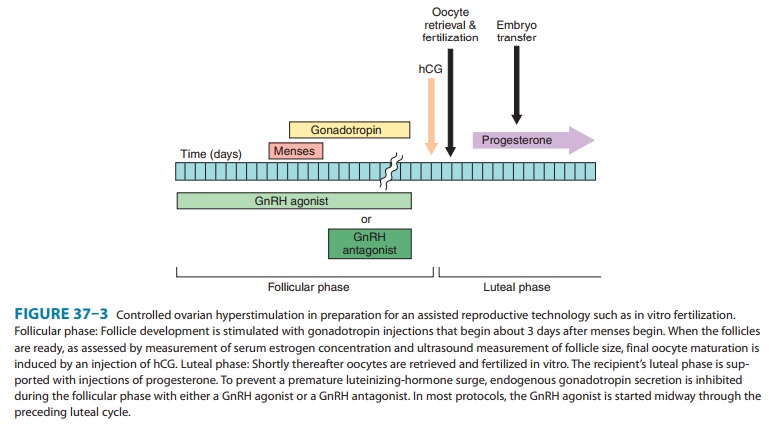 When appropriate follicular maturation has occurred, the FSH and the GnRH agonist or GnRH antagonist injections are discon-tinued; the following day, hCG (5000–10,000 IU) is administered intramuscularly to induce final follicular maturation and, in ovu-lation induction protocols, ovulation. The hCG administration is followed by insemination in ovulation induction and by oocyte retrieval in assisted reproductive technology procedures. Because use of GnRH agonists or antagonists during the follicular phase of ovulation induction suppresses endogenous LH production, it is important to provide exogenous hormonal support of the luteal phase. In clinical trials, exogenous progesterone, hCG, or a combination of the two have been effective at providing adequate luteal support. However, progesterone is preferred for luteal.

Most of the signs and symptoms of hypogonadism in males (eg, delayed puberty, retention of prepubertal secondary sex char-acteristics after puberty) can be adequately treated with exogenous androgen; however, treatment of infertility in hypogonadal men requires the activity of both LH and FSH. For many years, con-ventional therapy has consisted of initial treatment for 8–12 weeks with injections of 1000–2500 IU hCG several times per week. After the initial phase, hMG is injected at a dose of 75–150 units three times per week. In men with hypogonadal hypogonadism, it takes an average of 4–6 months of such treatment for sperm to appear in the ejaculate. With the more recent availability of uro-follitropin, rFSH, and rLH, a number of alternative protocols have been developed. An advance that has indirectly benefited gonadotropin treatment of male infertility is intracytoplasmic sperm injection (ICSI), in which a single sperm is injected directly into a mature oocyte that has been retrieved after controlled ovar-ian hyperstimulation of a female partner. With the advent of ICSI, the minimum threshold of spermatogenesis required for preg-nancy is greatly lowered.

Chorionic gonadotropin is approved for the treatment of prepuber-tal cryptorchidism. Prepubertal boys generally between 4 and 9 years of age were treated with IM injections of hCG for 2–6 weeks.

In the United States, chorionic gonadotropin has a black-box warning against its use for weight loss. The use of hCG plus severe calorie restriction for weight loss was popularized by a publication in the 1950s claiming that the hCG selectively mobilizes body fat stores. This practice continues today, despite a preponderance of subsequent scientific evidence from placebo-controlled trials that hCG does not provide any weight loss benefit beyond the weight loss associated with severe calorie restriction alone.

In women treated with gonadotropins and hCG, the two most seri-ous complications are the ovarian hyperstimulation syndrome and multiple pregnancies. Overstimulation of the ovary during ovulation induction often leads to uncomplicated ovarian enlarge-ment that usually resolves spontaneously. The ovarian hyperstimu-lation syndrome is a more serious complication that occurs in 0.5–4% of patients. It is characterized by ovarian enlargement, ascites, hydrothorax, and hypovolemia, sometimes resulting in shock. Hemoperitoneum (from a ruptured ovarian cyst), fever, and arterial thromboembolism can occur.

Other reported adverse effects of gonadotropin treatment are headache, depression, edema, precocious puberty, and (rarely) production of antibodies to hCG. In men treated with gonadotro-pins, the risk of gynecomastia is directly correlated with the level of testosterone produced in response to treatment. An association between ovarian cancer, infertility, and fertility drugs has been reported. However, it is not known which, if any, fertility drugs are causally related to cancer.