Adenomas that secrete excess prolactin usually retain the sensitiv-ity to inhibition by dopamine exhibited by the normal pituitary. Bromocriptine and cabergoline are ergot derivatives with a high affinity for dopamine D2 recep-tors.

Adenomas that secrete excess prolactin usually retain the sensitiv-ity to inhibition by dopamine exhibited by the normal pituitary. Bromocriptine and cabergoline are ergot derivatives  with a high affinity for dopamine D2 recep-tors. Quinagolide, a drug approved in Europe, is a nonergot agent with similarly high D 2 receptor affinity.

Dopamine agonists suppress prolactin release very effectively in patients with hyperprolactinemia. GH release is reduced in patients with acromegaly, although not as effectively. Bromocriptine has also been used in Parkinson’s disease to improve motor function and reduce levodopa requirements . Newer, nonergot D2 agonists used in Parkinson’s disease (pramipexole and ropinirole;) have been reported to interfere with lactation, but they are not approved for use in hyperprolactinemia.

All available dopamine agonists are active as oral preparations, and all are eliminated by metabolism. They can also be absorbed systemically after vaginal insertion of tablets. Cabergoline, with a half-life of approximately 65 hours, has the longest duration of action. Quinagolide has a half-life of about 20 hours, whereas the half-life of bromocriptine is about 7 hours. After vaginal adminis-tration, serum levels peak more slowly.

A dopamine agonist is the standard medical treatment for hyper-prolactinemia. These drugs shrink pituitary prolactin-secreting tumors, lower circulating prolactin levels, and restore ovulation in approximately 70% of women with microadenomas and 30% of women with macroadenomas (Figure 37–4). Cabergoline is initi-ated at 0.25 mg twice weekly orally or vaginally. It can be increased gradually, according to serum prolactin determinations, up to a maximum of 1 mg twice weekly. Bromocriptine is generally taken daily after the evening meal at the initial dose of 1.25 mg; the dose 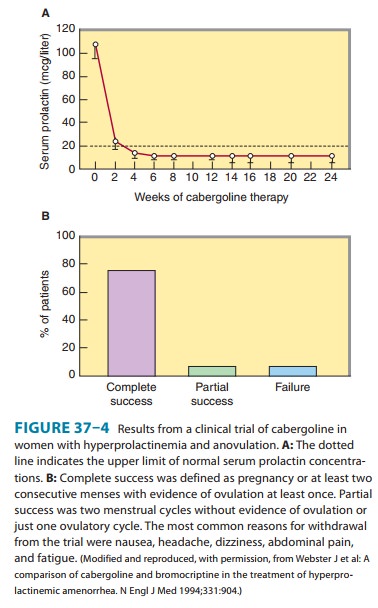 Dopamine agonists were used in the past to prevent breast engorgement when breast-feeding was not desired. Their use for this purpose has been discouraged because of toxicity (see Toxicity & Contraindications).

A dopamine agonist alone or in combination with pituitary sur-gery, radiation therapy, or octreotide administration can be used to treat acromegaly. The doses required are higher than those used to treat hyperprolactinemia. For example, patients with acromeg-aly require 20–30 mg/d of bromocriptine and seldom respond adequately to bromocriptine alone unless the pituitary tumor secretes prolactin as well as GH.

Dopamine agonists can cause nausea, headache, light-headedness, orthostatic hypotension, and fatigue. Psychiatric manifestations occasionally occur, even at lower doses, and may take months to resolve. Erythromelalgia occurs rarely. High dosages of ergot-derived preparations can cause cold-induced peripheral digital vasospasm. Pulmonary infiltrates have occurred with chronic high-dosage therapy. Cabergoline appears to cause nausea less often than bromocriptine. Vaginal administration can reduce nausea, but may cause local irritation.

Dopamine agonist therapy during the early weeks of pregnancy has not been associated with an increased risk of spontaneous abortion or congenital malformations. Although there has been a longer experience with the safety of bromocriptine during early pregnancy, there is growing evidence that cabergoline is also safe in women with macroadenomas who must continue a dopamine agonist during pregnancy. In patients with small pituitary ade-nomas, dopamine agonist therapy is discontinued upon concep-tion because growth of microadenomas during pregnancy is rare. Patients with very large adenomas require vigilance for tumor progression and often require a dopamine agonist throughout pregnancy. There have been rare reports of stroke or coronary thrombosis in postpartum women taking bromocriptine to sup-press postpartum lactation.