Growth hormone, an anterior pituitary hormone, is required during childhood and adolescence for attainment of normal adult size .

Growth hormone, an anterior pituitary hormone, is required during childhood and adolescence for attainment of normal adult size and has important effects throughout postnatal life on lipid and carbohydrate metabolism, and on lean body mass and bone den-sity. Its growth-promoting effects are primarily mediated via IGF-I(also known as somatomedin C). Individuals with congenital oracquired deficiency of GH during childhood or adolescence fail to reach their predicted adult height and have disproportionately increased body fat and decreased muscle mass. Adults with GH deficiency also have disproportionately low lean body mass.

Growth hormone is a 191-amino-acid peptide with two sulfhydryl bridges. Its structure closely resembles that of prolactin. In the past, medicinal GH was isolated from the pituitaries of human cadavers. However, this form of GH was found to be contami-nated with prions that could cause Creutzfeldt-Jakob disease. For this reason, it is no longer used. Somatropin, the recombinant form of GH, has a 191-amino-acid sequence that is identical with the predominant native form of human GH.

B. Absorption, Metabolism, and Excretion

Circulating endogenous GH has a half-life of 20–25 minutes and is predominantly cleared by the liver. Recombinant human GH (rhGH) is administered subcutaneously 6–7 times per week. Peak levels occur in 2–4 hours and active blood levels persist for approximately 36 hours.

Growth hormone mediates its effects via cell surface receptors of the JAK/STAT cytokine receptor superfamily. Growth hormone has two distinct GH receptor binding sites. Dimerization of two GH receptors is stimulated by a single GH molecule and acti-vates signaling cascades mediated by receptor-associated JAK tyrosine kinases and STATs . GH has complex effects on growth, body composition, and carbohydrate, protein, and lipid metabolism. The growth-promoting effects are medi-ated principally through an increase in the production of IGF-I. Much of the circulating IGF-I is produced in the liver. GH also stimulates production of IGF-I in bone, cartilage, muscle, kid-ney, and other tissues, where it plays autocrine or paracrine roles. GH stimulates longitudinal bone growth until the epiphyses close—near the end of puberty. In both children and adults, GH has anabolic effects in muscle and catabolic effects in lipid cells that shift the balance of body mass to an increase in muscle mass and a reduction in adiposity. The direct and indirect effects of GH on carbohydrate metabolism are mixed, in part because GH and IGF-I have opposite effects on insulin sensitivity. GH reduces insulin sensitivity, which results in mild hyperinsulin-emia, whereas IGF-I has insulin-like effects on glucose transport. In patients who are unable to respond to GH because of severe GH resistance (caused by GH receptor mutations, post-GH receptor signaling mutations, or GH antibodies), the administra-tion of recombinant human IGF-I may cause hypoglycemia because of its insulin-like effects.

GH deficiency can have a genetic basis, may be associated with midline developmental defect syndromes (eg, septo-optic dysplasia), or can be acquired as a result of damage to the pituitary or hypothalamus by a trauma (including breech or traumatic delivery), intracranial tumors, infection, infiltrative or hemorrhagic pro-cesses, or irradiation. Neonates with isolated GH deficiency are typically of normal size at birth because prenatal growth is not GH-dependent. In contrast, IGF-I is essential for normal prenatal and postnatal growth. Through poorly understood mechanisms, IGF-I expression and postnatal growth become GH-dependent during the first year of life. In childhood, GH deficiency typically presents as short stature, often with mild adiposity. Another early sign of GH deficiency is hypoglycemia due to unopposed action of insulin, to which young children are especially sensitive. Criteria for diagnosis of GH deficiency usually include (1) a subnormal height velocity for age and (2) a subnormal serum GH response following stimulation with at least two GH secretagogues. The prevalence of GH deficiency is approximately 1:5000. Therapy with rhGH permits many children with short stature due to GH deficiency to achieve normal adult height.

In the past, it was believed that adults with GH deficiency do not exhibit a significant syndrome. However, more detailed studies suggest that adults with GH deficiency often have gener-alized obesity, reduced muscle mass, asthenia, and reduced car-diac output. GH-deficient adults who have been treated with GH have been shown to experience a reversal of many of these manifestations.

B. Growth Hormone Treatment of Pediatric Patients with Short Stature

Although the greatest improvement in growth occurs in patients with GH deficiency, exogenous GH has some effect on height in children with short stature caused by factors other than GH defi-ciency. 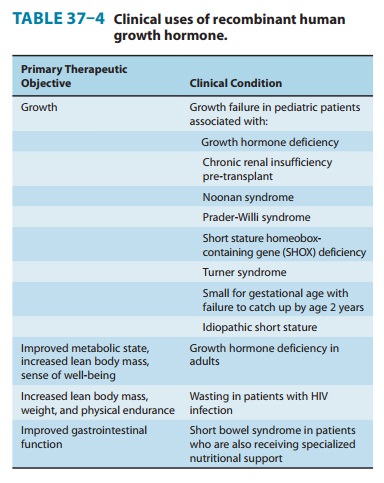 GH has been approved for several conditions (Table 37–4) and has been used experimentally or off-label in many others. Prader-Willi syndrome is an autosomal dominant genetic diseaseassociated with growth failure, obesity, and carbohydrate intoler-ance. In children with Prader-Willi syndrome and growth failure, GH treatment decreases body fat and increases lean body mass, linear growth, and energy expenditure.

A controversial but approved use of GH is for children with idiopathic short stature (ISS). This is a heterogeneous popula-tion that has in common no identifiable cause of the short stature. Some have arbitrarily defined ISS clinically as having a height at least 2.25 standard deviations below the norm for children of the same age and an unlikelihood of achieving an adult height that will be less than 2.25 standard deviations below the norm. In this group of children, many years of GH therapy result in an average increase in adult height of 4–7 cm (1.57–2.76 inches) at a cost of $5000–$40,000 per year. The complex issues involved in the cost-risk-benefit relationship of this use of GH are important because an estimated 400,000 children in the United States fit the diag-nostic criteria for ISS.

Treatment of children with short stature should be carried out by specialists experienced in GH administration. GH dose require-ments vary with the condition being treated, with GH-deficient children typically being most responsive. Children must be observed closely for slowing of growth velocity, which could indicate a need to increase the dosage or the possibility of epiphyseal fusion or intercurrent problems such as hypothyroidism or malnutrition.

Other Uses of Growth Hormone

Growth hormone affects many organ systems and also has a net anabolic effect. It has been tested in a number of conditions that are associated with a severe catabolic state and is approved for the treatment of wasting in patients with AIDS. In 2004, GH was approved for treatment of patients with short bowel syndrome who are dependent on total parenteral nutrition (TPN). After intestinal resection or bypass, the remaining functional intestine in many patients undergoes extensive adaptation that allows it to adequately absorb nutrients. However, other patients fail to ade-quately adapt and develop a malabsorption syndrome. GH has been shown to increase intestinal growth and improve its function in experimental animals. Benefits of GH treatment for patients with short bowel syndrome and dependence on total parenteral nutrition have mostly been short-lived in the clinical studies that have been published to date. Growth hormone is administered with glutamine, which also has trophic effects on the intestinal mucosa.

GH is a popular component of “anti-aging” programs. Serum levels of GH normally decline with aging; anti-aging programs claim that injection of GH or administration of drugs purported to increase GH release are effective anti-aging remedies. These claims are largely unsubstantiated. In contrast studies in mice and the nematode C elegans have clearly demonstrated that ana-logs of human GH and IGF-I consistently shorten life span and that loss-of-function mutations in the signaling pathways for the GH and IGF-I analogs lengthen life span. Another use of GH is by athletes for a purported increase in muscle mass and athletic performance. GH is one of the drugs banned by the Olympic Committee.

Although GH has important effects on lipid and carbohydrate metabolism and on lean body mass, it does not seem likely to be a fruitful direct target for efforts to develop new drugs to treat obe-sity. However, some of the hormonal and neuroendocrine systems that regulate GH secretion are being investigated as possible targets for antiobesity drugs (see Box: Treatment of Obesity).

In 1993, the FDA approved the use of recombinant bovine growth hormone (rbGH) in dairy cattle to increase milk produc-tion. Although milk and meat from rbGH-treated cows appear to be safe, these cows have a higher incidence of mastitis, which could increase antibiotic use and result in greater antibiotic resi-dues in milk and meat.

There has been no increased incidence of malignancy among patients receiving GH therapy, but GH treatment is contraindicated in a patient with a known active malignancy. Proliferative retinopathy may rarely occur. GH treatment of critically ill patients appears to increase mortality.