Describe olfactory neurons, and explain how airborne molecules can stimulate action potentials in the olfactory nerves.

The sense of smell, called olfaction (ol-fak′ shŭn), occurs in response to airborne molecules, called odorants, that enter the nasal cavity. Olfactory neurons are bipolar neurons within the olfactoryepithelium,which lines the superior part of the nasal cavity(figure 9.4a). The dendrites of the olfactory neurons extend to the epithelial surface, and their ends are modified with long, special-ized cilia that lie in a thin mucous film on the epithelial surface. The mucus keeps the nasal epithelium moist, traps and dissolves airborne molecules, and facilitates the removal of molecules and particles from the nasal epithelium.

Airborne odorants become dissolved in the mucus on the surface of the epithelium and bind to receptor molecules on the membranes of the specialized cilia. The binding of the odorant to the receptor initiates action potentials, which are then conducted to the olfactory cortex of the cerebrum by sensory neurons. There 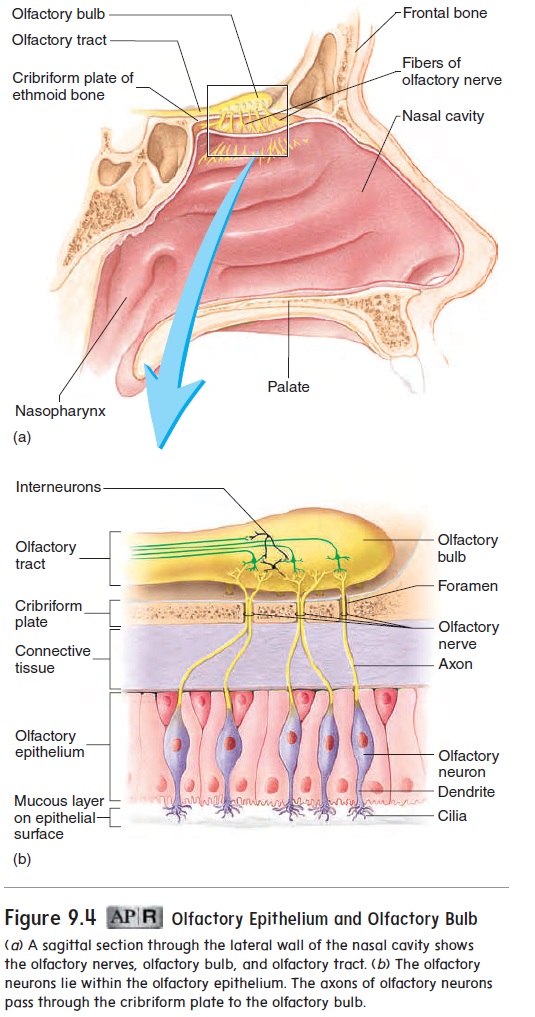 are at least 400 functional olfactory receptors in humans. Unlike most other receptors in the body, each olfactory receptor can bind multiple types of odorants; conversely, each type of odorant can bind to multiple olfactory receptors. These multiple combinations of odorants and receptors allow us to detect an estimated 10,000 different smells. Once an odorant has bound to its receptor, that receptor is desensitized and does not respond to another odor mol-ecule for some time, which helps with adaptation (described next) to a particular odor. The threshold for the detection of odors is extremely low, so very few odorants bound to an olfactory neuron can initiate an action potential. The olfactory range and sensitivity is even greater in some animals than in humans, due to a larger number and more types of olfactory receptors. For example, dogs are often used to detect small traces of explosives and other chemi-cals that people cannot detect.

Within the olfactory bulb and olfactory cortex are feedback loops that tend to inhibit transmission of action potentials result-ing from prolonged exposure to a given odorant. This feedback, plus the temporary decreased sensitivity at the level of the receptors, results in adaptation to a given odor. For example, if you enter a room that has an odor, such as a movie theater that smells like popcorn, you adapt to the odor and cannot smell it as well after the first few minutes. If you leave the room for some time and then reenter the room, the odor again seems more intense.