Figure 9.16 shows the neuronal pathways that transmit signals generated by light from the time light enters the eye until it reaches the area of the brain where vision is perceived.

Figure 9.16 shows the neuronal pathways that transmit signals generated by light from the time light enters the eye until it reaches the area of the brain where vision is perceived. The opticnerve leaves the eye and exits the orbit through the optic foramento enter the cranial cavity. Just inside the cranial cavity, the two optic nerves connect to each other at the optic chiasm (k ′ azm; crossing). Axons from the nasal (medial) part of each retina cross through the optic chiasm and project to the opposite side of the brain. Axons from the temporal (lateral) part of each retina pass through the optic nerves and project to the brain on the same side of the body without crossing. 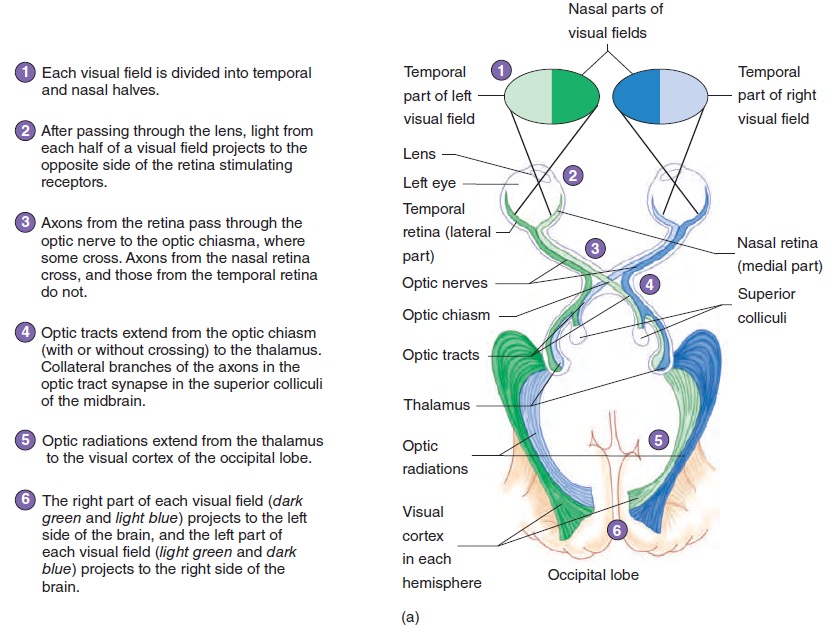 Beyond the optic chiasm, the route of the ganglionic axons is through the two optic tracts (figure 9.16). Most of the optic tract axons terminate in the thalamus. Some axons do not termi-nate in the thalamus but separate from the optic tracts to termi-nate in the superior colliculi, the center for visual reflexes. An example of a visual reflex is turning the head and eyes toward a stimulus, such as a sudden noise or flash of light. Neurons from the thalamus form the fibers of the optic radiations, which project to the visual cortex in the occipital lobe of the cerebrum(figure 9.16). The visual cortex is the area of the cerebrum where vision is perceived.

The image seen by each eye is the visual field of that eye (figure 9.16a). Depth perception (three-dimensional, or binocular, vision) requires both eyes and occurs where the two visual fields overlap (figure 9.16c). Each eye sees a slightly different (mon-ocular) view of the same object. The brain then processes the two images into a three-dimensional view of the object. If only one eye is functioning, the view of the object is flat, much like viewing a photograph.