A. List the general senses and the receptor type associated with each. B. Define and describe pain and referred pain.

The general senses have sensory receptors that are widely distributed throughout the body. The general senses include the senses of touch, pressure, pain, temperature, vibration, itch, and proprioception (prō-prē-ō-sep′ shun), which is the sense of movement and position of the body and limbs. 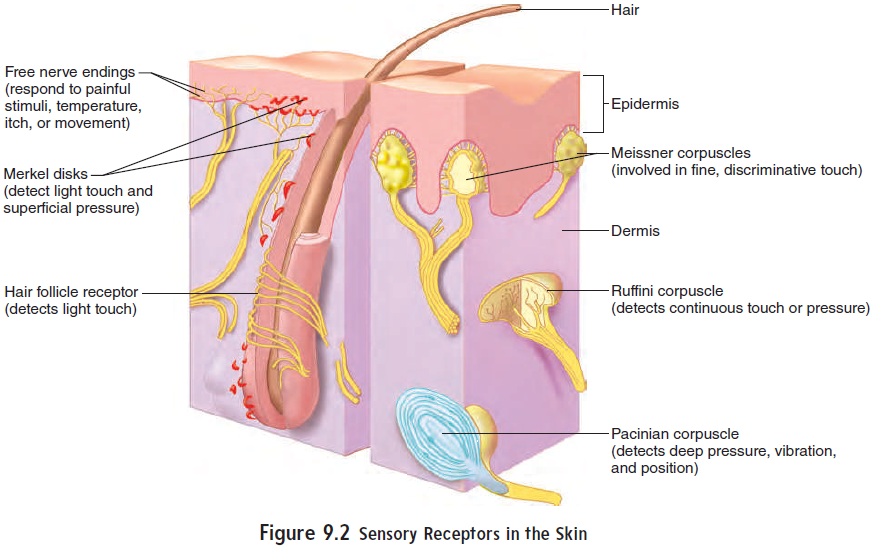 Action potentials from pain receptors in local areas of the body can be suppressed by local anesthesia, a treatment where chemical anesthetics are injected near a sensory receptor or nerve, resulting in reduced pain sensation. Pain sensations can also be suppressed if loss of consciousness is produced. This is usually accomplished by general anesthesia, a treatment where chemical anesthetics that affect the reticular formation are administered.

Pain sensations can also be influenced by inherent control systems. Sensory axons from tactile receptors in the skin have collateral branches that synapse with neurons in the posterior horn of the spinal cord. Those neurons, in turn, synapse with and inhibit neurons that give rise to the spinothalamic tract, a sensory pathway that relays pain sensations to the brain (see table 8.4). For example, rubbing the skin in the area of an injury stimulates the tactile receptors, which send action potentials along the sensory axons to the spinal cord. According to the gate control theory, these action potentials “close the gate” and inhibit action poten-tials carried to the brain by the spinothalamic tract.

The gate control theory may explain the physiological basis for several techniques that have been used to reduce the intensity of pain. Action potentials carried by the spinothalamic tract can be inhibited by action potentials carried by descending neurons of the dorsal column system . These neurons are stimulated by mental or physical activity, especially involving movement of the limbs. The descending neurons synapse with and inhibit neurons in the posterior horn that give rise to the spinothalamic tract. Vigorous mental or physical activity increases the rate of action potentials in neurons of the dorsal column and can reduce the sensation of pain. Exercise programs are important components in the clinical man-agement of chronic pain. Acupuncture and acupressure procedures may also decrease the sensation of pain by stimulating descending dorsal column neurons, which inhibit action potentials in the spino-thalamic tract neurons. The gate control theory also explains why the intensity of pain is decreased by diverting a person’s attention.

Referred pain is perceived to originate in a region of the body thatis not the source of the pain stimulus. Most commonly, we sense referred pain when deeper structures, such as internal organs, are damaged or inflamed (figure 9.3). This occurs because sensory neurons from the superficial area to which the pain is referred and the neurons from the deeper, visceral area where the pain stimula-tion originates converge onto the same ascending neurons in the spinal cord. The brain cannot distinguish between the two sources of pain stimuli, and the painful sensation is referred to the most superficial structures innervated, such as the skin. 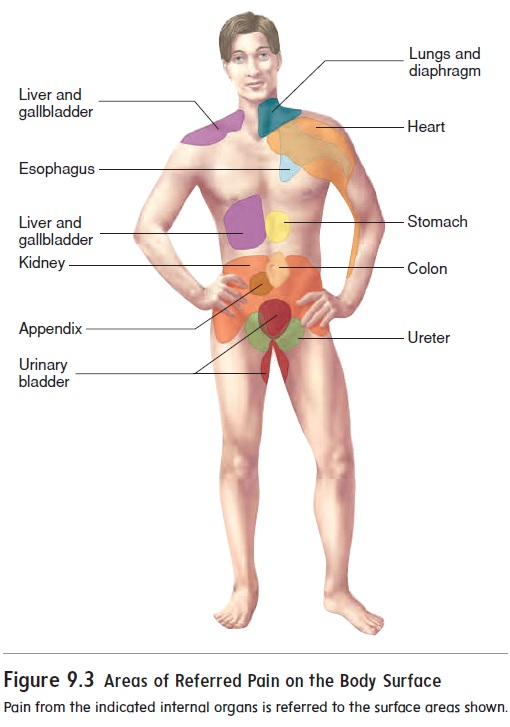 Referred pain is clinically useful in diagnosing the actual cause of the painful stimulus. For example, during a heart attack, pain receptors in the heart are stimulated when blood flow is blocked to some of the heart muscle. Heart attack victims, however, often may not feel the pain in the heart but instead perceive cutaneous pain radiating from the left shoulder down the arm (figure 9.3).