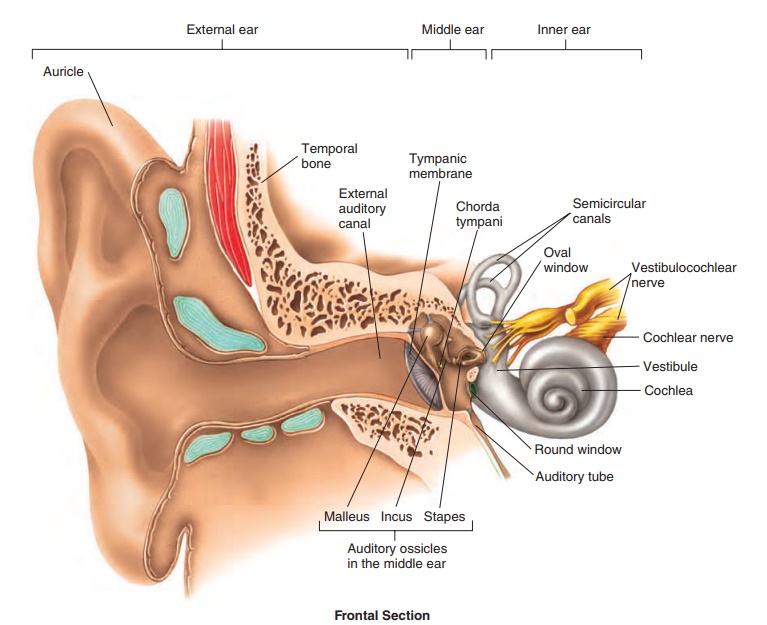 The organs of hearing and balance are apportioned into three areas: the external, middle, and inner ears (figure 9.17). The exter-nal ear is the part extending from the outside of the head to the tympanic membrane, which is also called the eardrum. The middle ear is an air-filled chamber medial to the tympanic membrane. The inner ear is a set of fluid-filled chambers medial to the middle ear. The external and middle ears are involved in hearing only, whereas the inner ear functions in both hearing and balance. 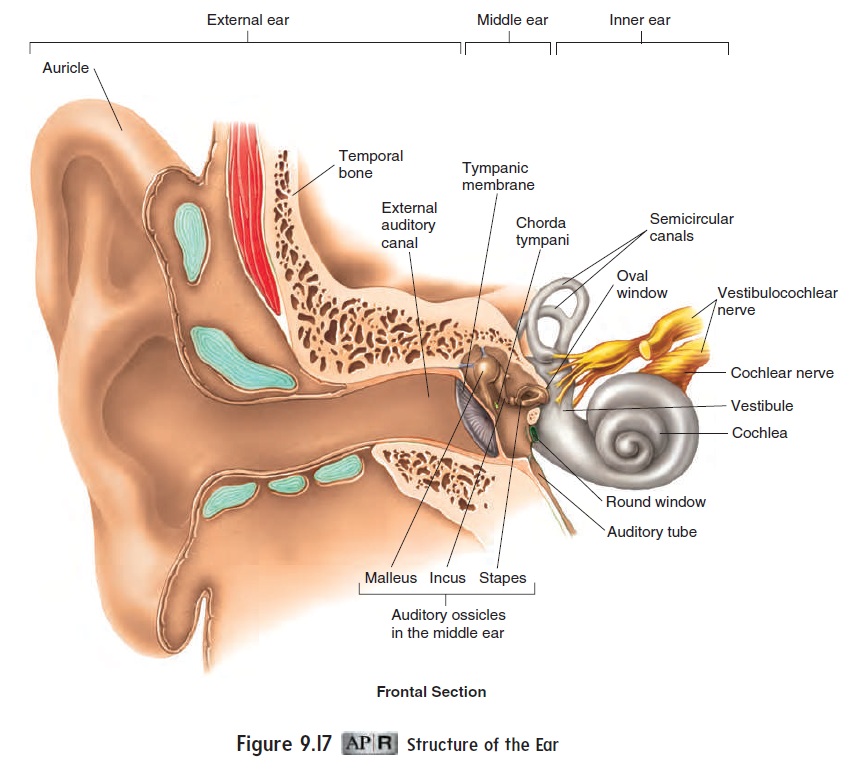 The auricle (aw′ ri-kl; ear) is the fleshy part of the external ear on the outside of the head. The auricle opens into the external auditorycanal, a passageway that leads to the eardrum. The auricle collectssound waves and directs them toward the external auditory canal, which transmits them to the tympanic membrane. The auditory canal is lined with hairs and ceruminous (sĕ-roo′ mi-nŭs; cera, wax) glands, which produce cerumen (sĕ-roo′men), a modified sebumcommonly called earwax. The hairs and cerumen help prevent for-eign objects from reaching the delicate tympanic membrane.

The tympanic (tim-pan′ ik; drumlike) membrane, or eardrum, is a thin membrane that separates the external ear from the middle ear. It consists of a thin layer of connective tissue sandwiched between two epithelial layers. Sound waves reaching the tympanic membrane cause it to vibrate.

Two small muscles in the middle ear, one attached to the malleus and the other to the stapes, help dampen vibrations caused by loud noises, thus protecting the delicate inner ear structures.

There are two unblocked openings into the middle ear. One opens into the mastoid air cells in the mastoid process of the temporal bone. The other, called the auditory tube, or eustachian (ū-stā′ shŭn) tube,opens into the pharynx and enables air pressure to be equalized between the outside air and the middle ear cavity. Unequal pressure between the middle ear and the outside environ-ment can distort the tympanic membrane, dampen its vibrations, and make hearing difficult. Distortion of the tympanic membrane also stimulates pain receptors associated with that structure. That distortion is why, as a person changes altitude, sounds seem muffled and the tympanic membrane may become painful. These symptoms can be relieved by opening the auditory tube to allow air to enter or exit the middle ear, such as by swallowing, yawning, chewing, or holding the nose and mouth shut while gently forcing air out of the lungs. 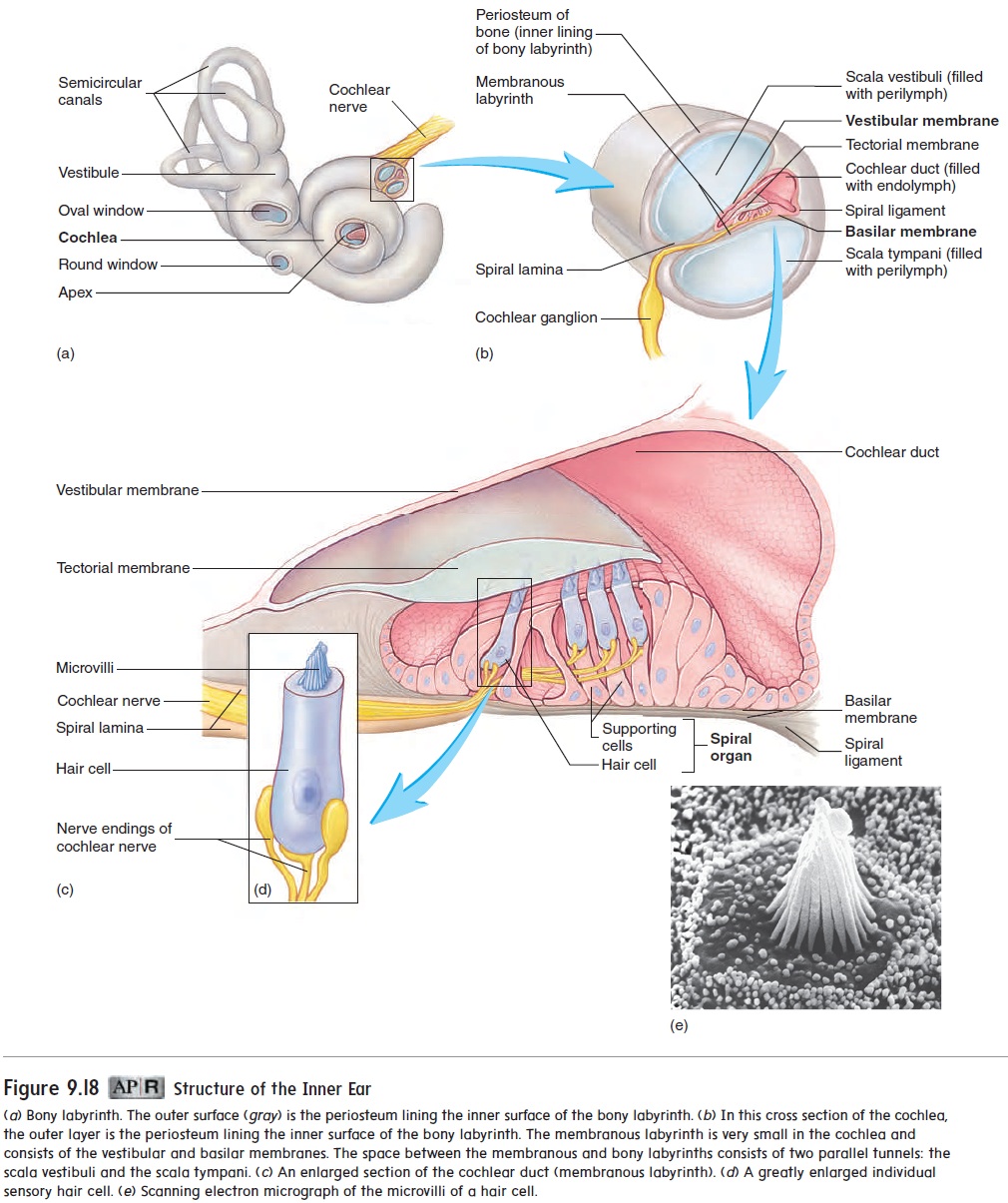 Inside the cochlear duct is a specialized structure called the spiral organ, ororgan of Corti(figure 9.18c). The spiral organcontains specialized sensory cells called hair cells, which have hairlike microvilli, often referred to as stereocilia, on their sur-faces (figure 9.18c,d,e). The microvilli are stiffened by actin fila-ments. The hair tips are embedded within an acellular gelatinous shelf called the tectorial (tek-tōr′ē-ăl; a covering) membrane, which is attached to the spiral lamina (figure 9.18b,c).

Hair cells have no axons of their own, but each hair cell is asso-ciated with axon terminals of sensory neurons, the cell bodies of which are located within the cochlear ganglion, or spiral ganglion.

Axons of the sensory neurons join to form the cochlear nerve. This nerve joins the vestibular nerve to become the vestibulocochlearnerve (VIII), which carries action potentials to the brain.

Vibrations create sound waves. Sound waves are collected by the auricle and conducted through the external auditory canal toward the tympanic membrane. Sound waves strike the tympanic mem-brane and cause it to vibrate. This vibration causes vibration of the three ossicles of the middle ear, and by this mechanical linkage, the force of vibration is amplified and transferred to the oval win-dow (figure 9.19, steps 1–3).

Vibrations of the base of the stapes, seated in the oval window, produce waves in the perilymph of the cochlea. The two scalae can be thought of as a continuous, U-shaped tube, with the oval window at one end of the scala vestibuli and the round window at the other end of the scala tympani. The vibrations of the stapes in the oval window cause movement of the perilymph, which pushes against the membrane covering the round window (figure 9.19 step 4). This phenomenon is similar to pushing against a rubber diaphragm on one end of a fluid-filled glass tube. If the tube has a rubber dia-phragm on each end, the fluid can move. If one end of the glass tube or of the cochlear tubes were solid, no fluid movement would occur. 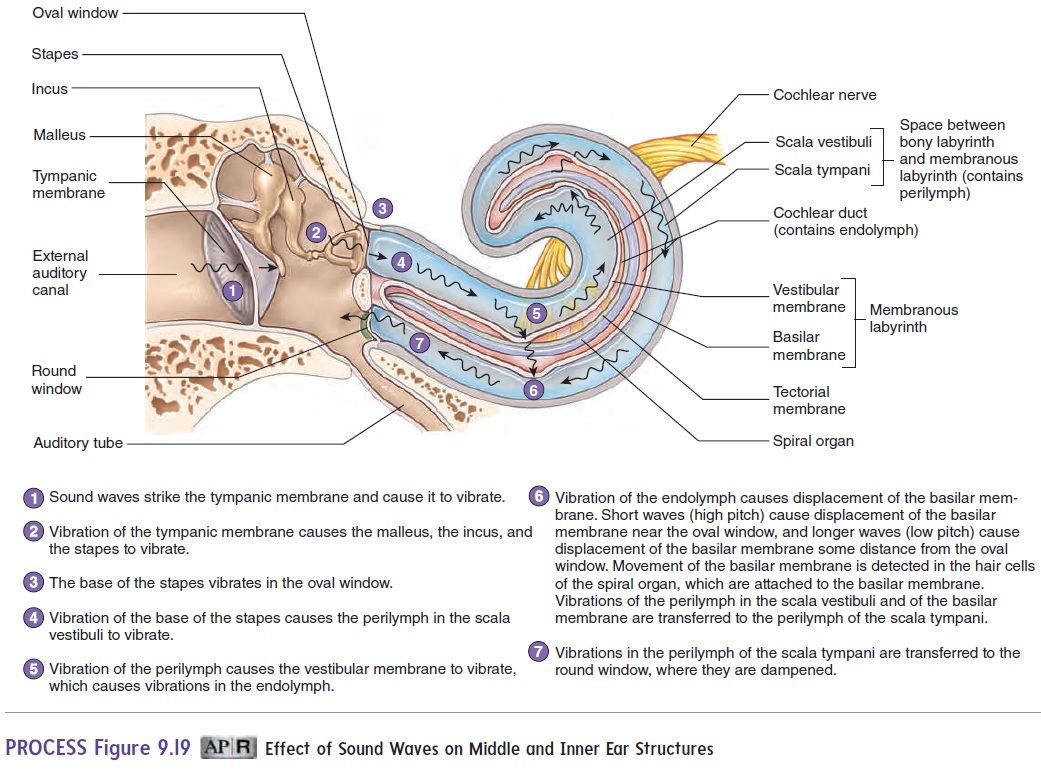 The basilar membrane is not uniform throughout its length. The membrane is narrower and denser near the oval window and wider and less dense near the tip of the cochlea. The various regions of the membrane can be compared to the strings in a piano (i.e., some are short and thick, and others are longer and thinner). As a result of this organization, sounds with higher pitches cause maximum distortion of the basilar membrane nearer the oval window, whereas sounds with lower pitches cause maximum distortion nearer the apex of the cochlea. In each case, different hair cells are stimulated, and because of the differences in which hair cells are maximally stimulated, a person is able to detect variations in pitch. Sound volume is a function of sound wave amplitude, which causes the basilar membrane to distort more intensely and the hair cells to be stimulated more strongly.

Hearing impairment can have many causes. In general, there are two categories of hearing impairment: conduction deafness and sensorineural hearing loss (see the Diseases and Disorders table). Conduction deafness results from mechanical deficiencies—for example, destruction of the ligament that holds the malleus and incus together. Sensorineural hearing loss is caused by deficiencies in the spiral organ or nerves;for example, loud sounds can damage the delicate microvilli of the hair cells, leading to destruction of the spiral organ. 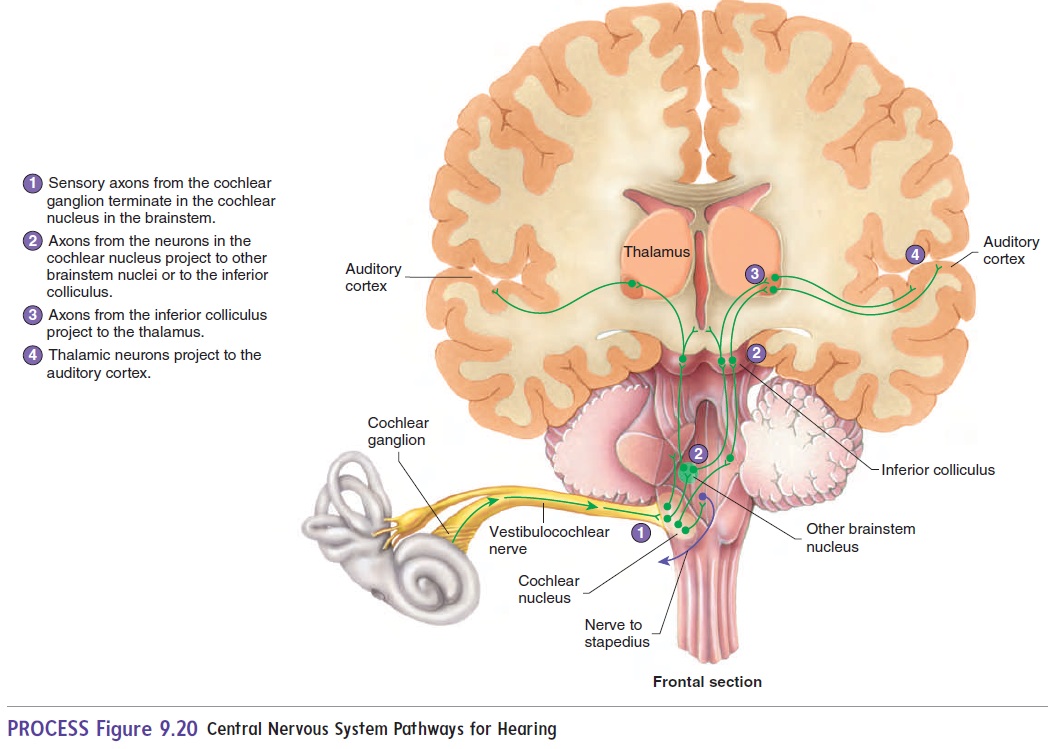 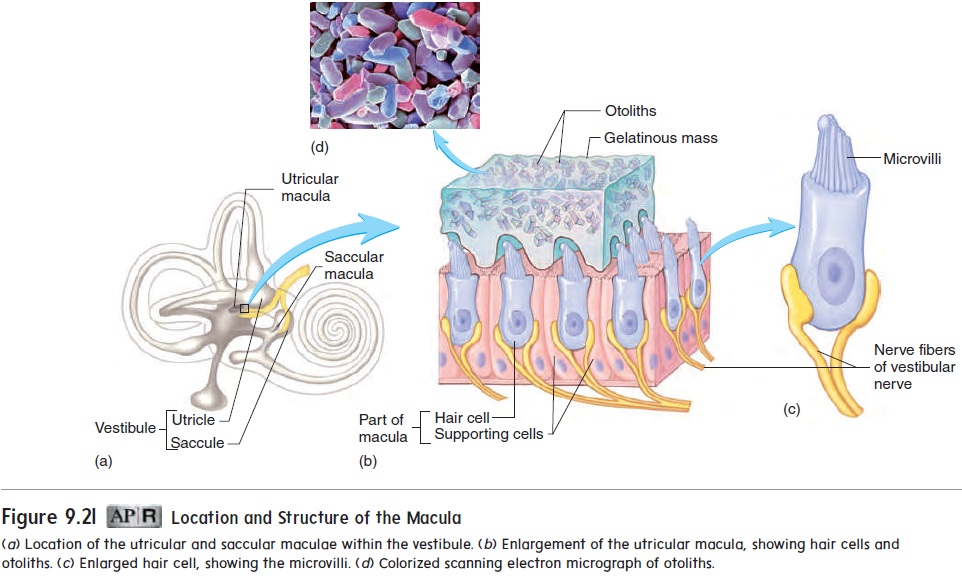 The vestibule (ves′ ti-bool) of the inner ear can be divided into two chambers: the utricle (ū′ tri-kl) and the saccule (sak′ ūl) (figure 9.21a). Each chamber contains specialized patches of epithelium called themaculae (mak′ ū-lē), which are surrounded by endolymph. The maculae, like the spiral organ, contain hair cells. The tips of the microvilli of these cells are embedded in a gelatinous mass, often called theotolithic membrane, weighted by otoliths (ō′ tō-liths; ear stones), particles composed of protein and calcium carbonate. The weighted gelatinous mass moves in response to gravity, bending the hair cell microvilli (figure 9.21c) and initiating action potentials in the associated neurons. The action potentials from these neurons are carried by axons of the vestibular portion of the vestibulocochlear nerve (VIII) to the brain, where they are interpreted as a change in the position of the head. For example, when a person bends over, the maculae are displaced by gravity, and the resultant action potentials provide information to the brain concerning the position of the head (figure 9.22). 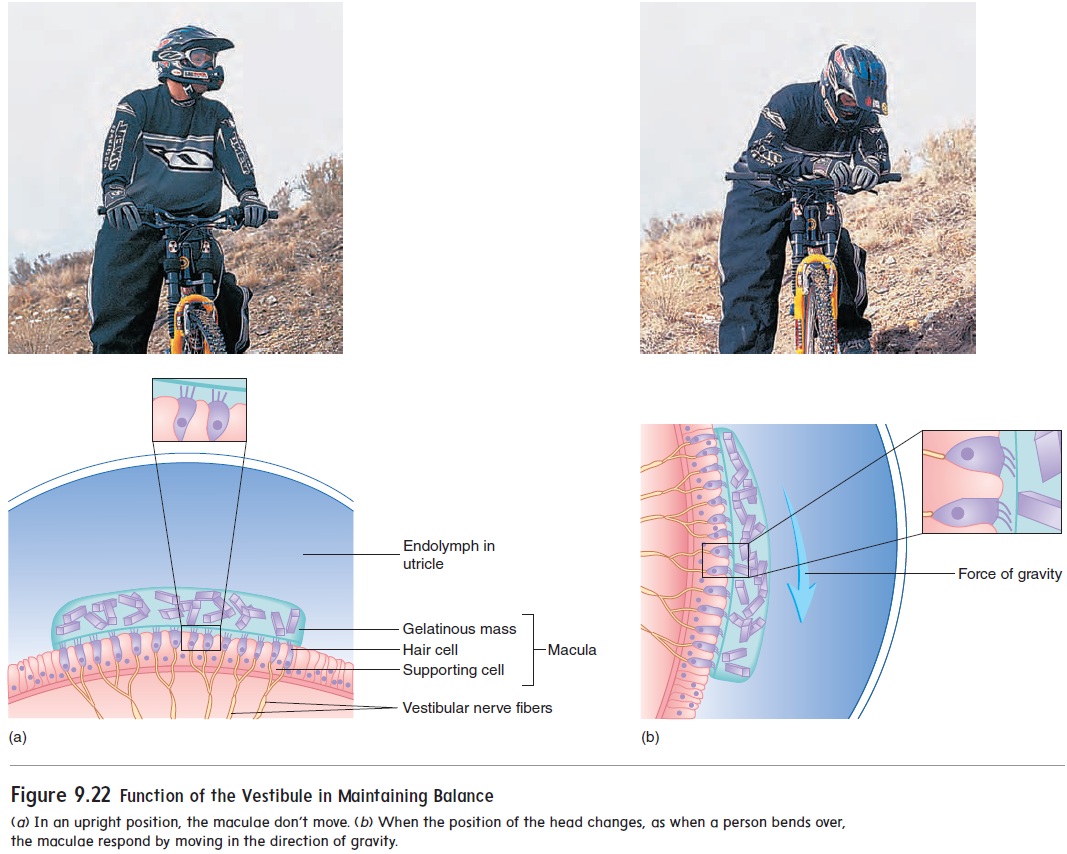 Three semicircular canals are involved in dynamic equilib-rium. The canals are placed at nearly right angles to one another, enabling a person to detect movements in essentially any direc-tion. The base of each semicircular canal is expanded into an ampulla (am-pul′ă) (figure 9.23a). Within each ampulla, theepithelium is specialized to form a crista ampullaris (kris′ tă am-pūl′ ar′ is) (figure 9.23b). Each crista consists of a ridge of epi-thelium with a curved, gelatinous mass, the cupula (koo′ poo-lă; a tub), suspended over the crest. The cupula is structurally and functionally very similar to the maculae, except that it contains no otoliths. The hairlike microvilli of the crista hair cells (figure 9.23c) are embedded in the cupula. The cupula functions as a float that is displaced by endolymph movement within the semicircular canals (figure 9.24). As the head begins to move in one direction, the endolymph tends to remain stationary, while the cupula moves with the head. This difference displaces the cupula in a direction opposite that of the movement of the head. As movement contin-ues, the fluid “catches up.” When movement of the head and the cupula stops, the fluid continues to move, displacing the cupula in the direction of the movement. Movement of the cupula causes the hair cell microvilli to bend, which initiates depolarization inthe hair cells. This depolarization initiates action potentials in the vestibular nerves, which join the cochlear nerves to form the ves-tibulocochlear nerves. 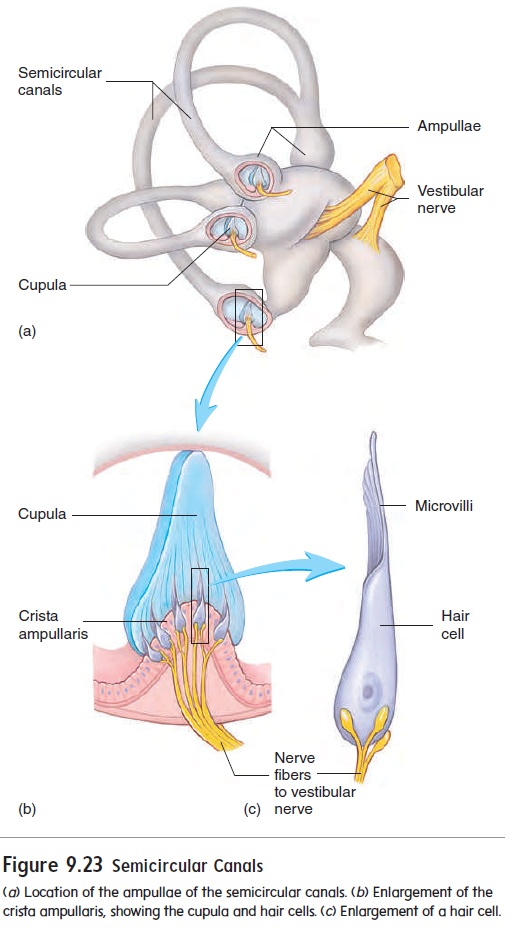 Axons forming the vestibular portion of the vestibulocochlear nerve (VIII) project to the vestibular nucleus in the brainstem. Axons run from this nucleus to numerous areas of the CNS, such as the cerebellum and cerebral cortex.

Balance is a complex sensation involving sensory input to the vestibular nucleus not only from the inner ear but also from the limbs (proprioception) and visual system as well. In sobriety tests, people are asked to close their eyes while their balance is evaluated because alcohol affects the proprioceptive and vestibular components of balance to a greater extent than the visual component of balance.