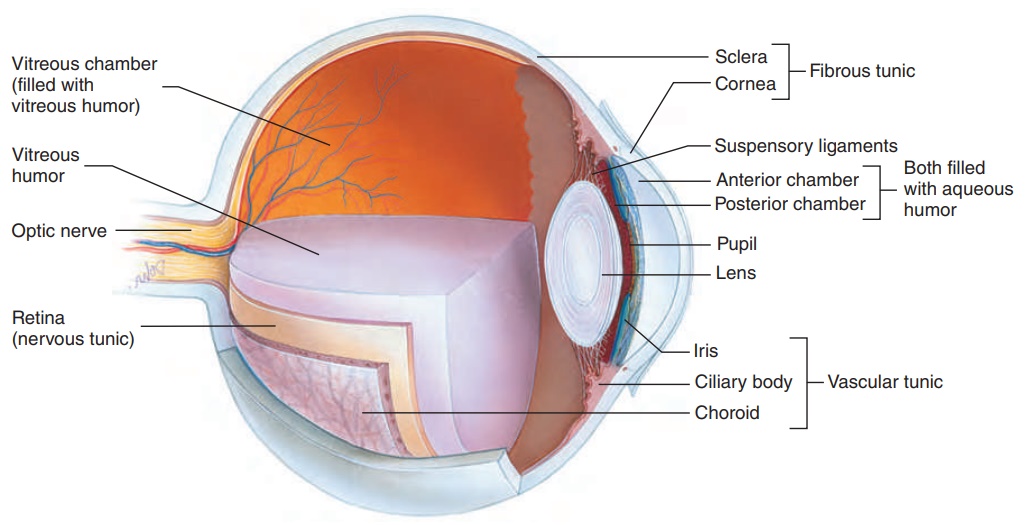 The eyeball is a hollow, fluid-filled sphere. The wall of the eye is composed of three tissue layers, or tunics. 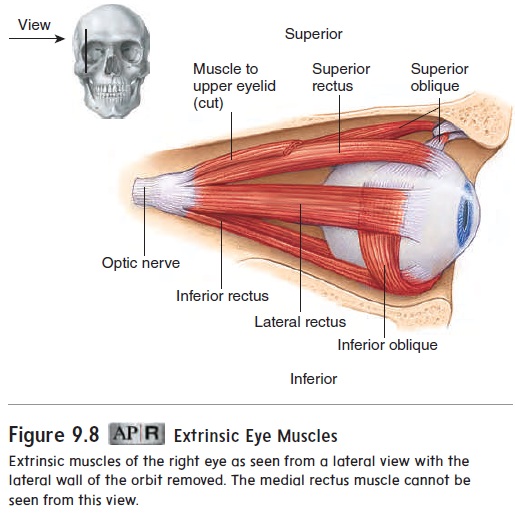 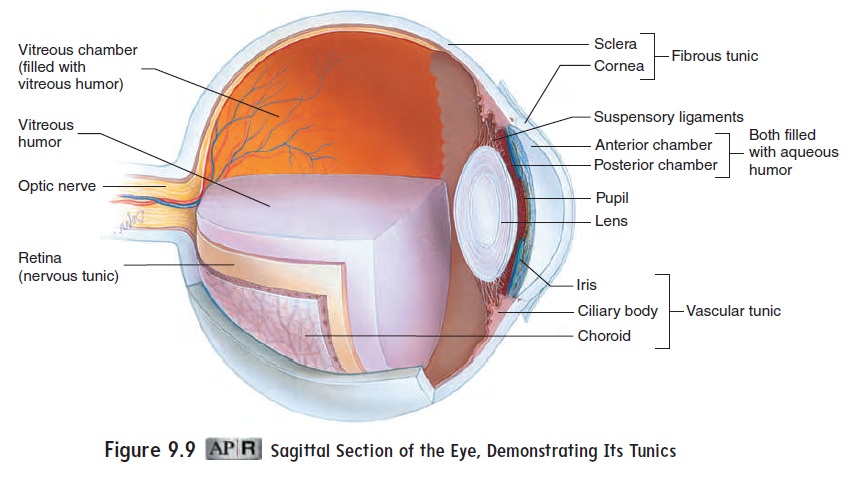 The sclera (skl̄e r′ ̆a ; hard) is the firm, white, outer connective tis-sue layer of the posterior five-sixths of the fibrous tunic. The sclera helps maintain the shape of the eye, protects the internal structures, and provides attachment sites for the extrinsic eye muscles. A small portion of the sclera can be seen as the “white of the eye.”

The cornea (k̄o r′ n̄e -̆a ) is the transparent anterior sixth of the eye, which permits light to enter. As part of the focusing system of the fibrous tunic, the cornea also bends, or refracts, the entering light.

The middle tunic of the eye is called the vascular tunic because it contains most of the blood vessels of the eye. The posterior por-tion of the vascular tunic, associated with the sclera, is the choroid (k̄o ′ royd). This very thin structure consists of a vascular network and many melanin-containing pigment cells, causing it to appear black. The black color absorbs light, so that it is not reflected inside the eye. If light were reflected inside the eye, the reflection would interfere with vision. The interiors of cameras are black for the same reason.

Anteriorly, the vascular tunic consists of the ciliary body and the iris. The ciliary (sil′ ē -ar-ē ) body is continuous with the anterior margin of the choroid. The ciliary body contains smooth muscles calledciliary muscles, which attach to the perimeter of the lens by suspensory ligaments (figure 9.10). The lens is a flex-ible, biconvex, transparent disc (see figure 9.9). 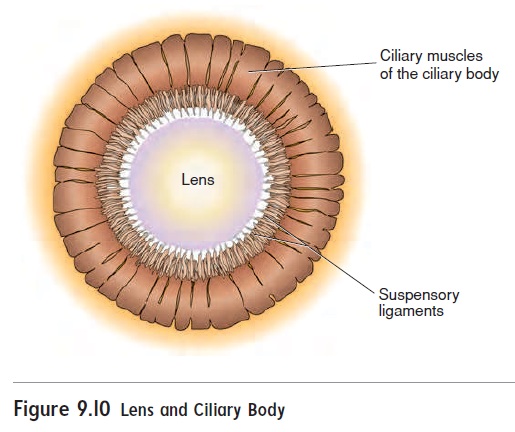 The iris is the colored part of the eye. It is attached to the anterior margin of the ciliary body, anterior to the lens. The iris is a contractile structure consisting mainly of smooth muscle surround-ing an opening called the pupil. Light passes through the pupil, and the iris regulates the diameter of the pupil, which controls the amount of light entering the eye. Parasympathetic stimulation from the oculomotor nerve (III) causes the circular smooth muscles of the iris to contract, constricting the pupil, whereas sympathetic stimula-tion causes radial smooth muscles of the iris to contract, dilating the pupil (figure 9.11). As light intensity increases, the pupil constricts; as light intensity decreases, the pupil dilates. 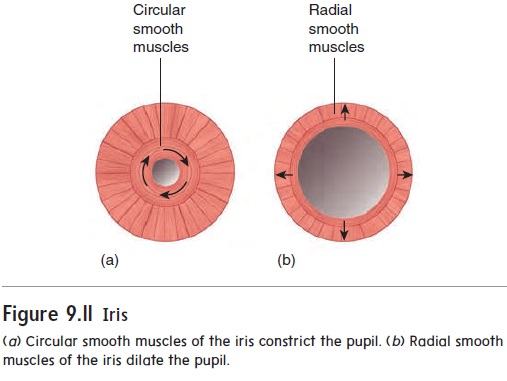 The nervous tunic is the innermost tunic and consists of the retina. The retina covers the posterior five-sixths of the eye and iscomposed of two layers: an outer pigmented retina and an inner 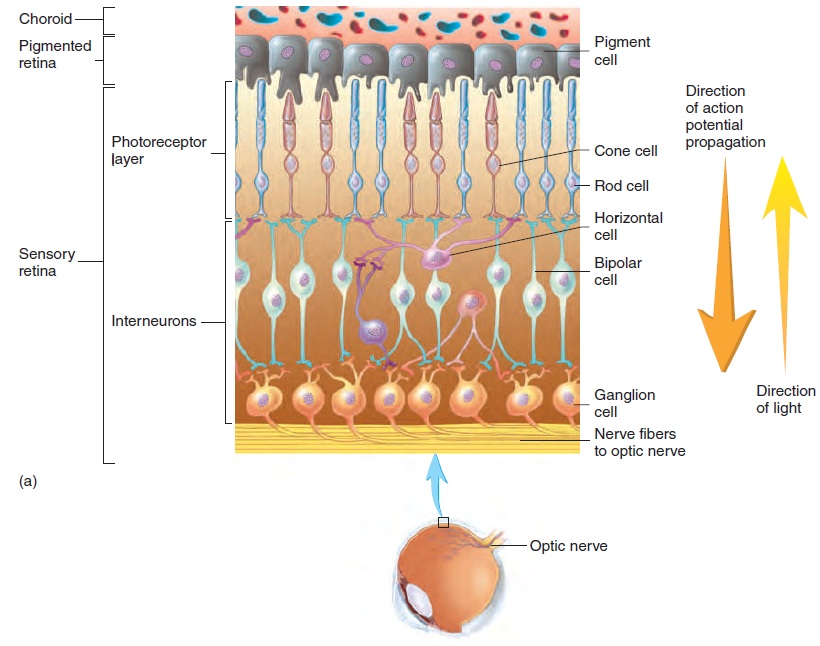 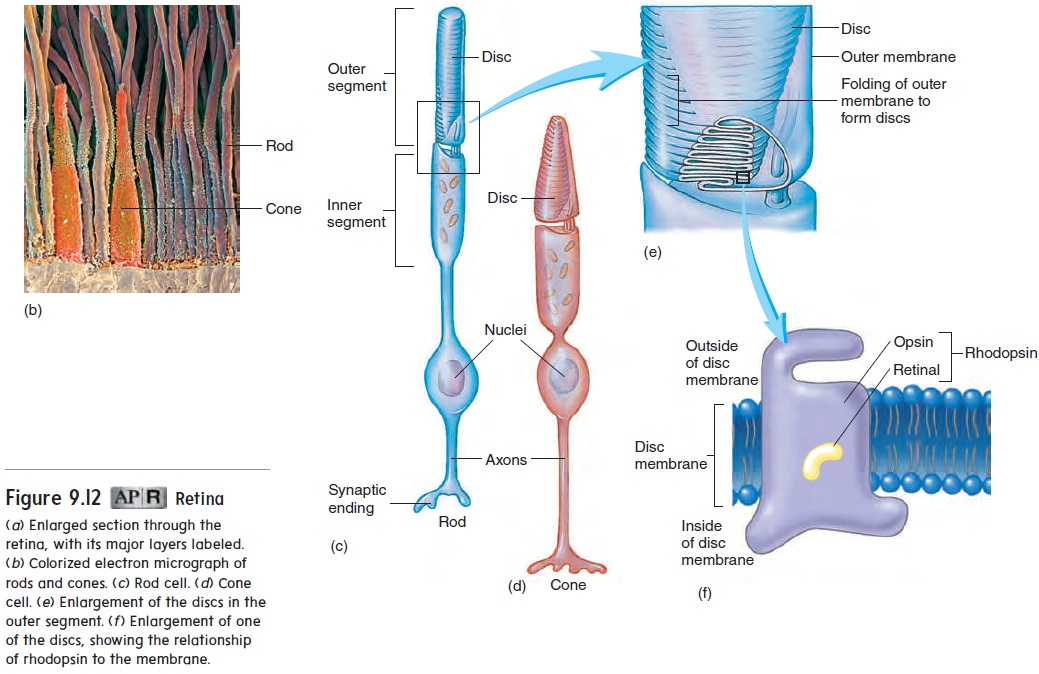 sensory retina (figure 9.12a). The pigmented retina, with thechoroid, keeps light from reflecting back into the eye. The sen-sory retina contains photoreceptor cells, called rods and cones, which respond to light. The sensory retina also contains numerous interneurons, some of which are named in figure 9.12. Over most of the retina, rods are 20 times more common than cones. Rods are very sensitive to light and can function in dim light, but they do not provide color vision. Cones require much more light, and they do provide color vision. There are three types of cones, each sensitive to a different color: blue, green, or red.

The outer segments of rod and cone cells are modified by numer-ous foldings of the cell membrane to form discs (figure 9.12c–e). Rod cells contain a photosensitive pigment called rhodopsin (rō-dop′ sin; purple pigment). Rhodopsin consists of a protein opsin (op′ sin) loosely bound to a yellow pigment called retinal (ret′ i-năl) (figure 9.12f, figure 9.13, step 1). When exposed to light, retinal changes shape, which then changes the activity of the entire rhodop-sin molecule. This change in rhodopsin stimulates a response in the rod cell, resulting in vision (figure 9.13, steps 2 and 3). Retinal then completely detaches from opsin. Energy (ATP) is required to reat-tach retinal to opsin and return rhodopsin to the form it had before it was stimulated by light (figure 9.13, steps 4–6). 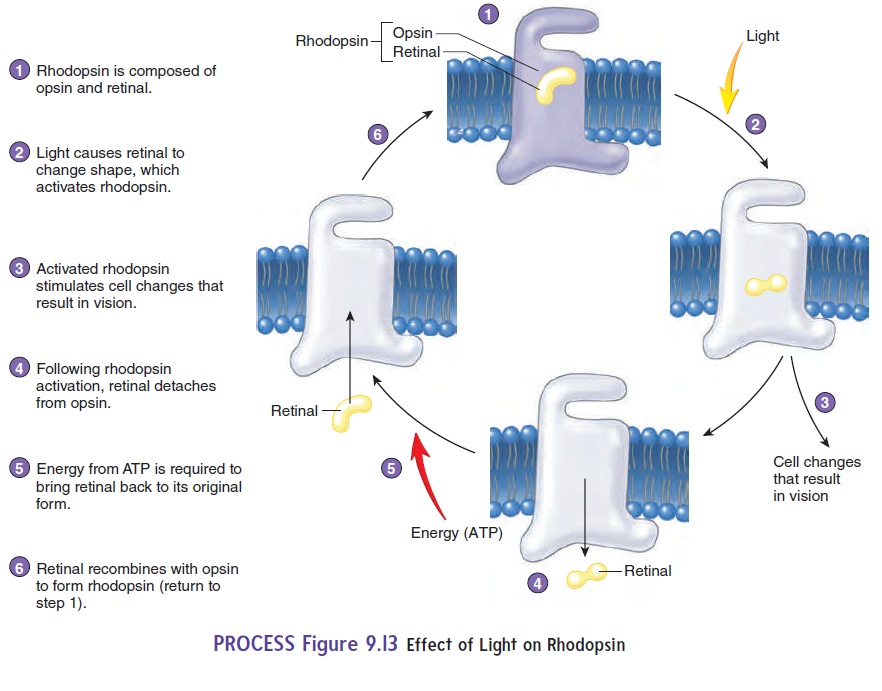 The manufacture of retinal in rod cells takes time and requires vitamin A. In bright light, much of the rhodopsin in rod cells is dissociated (opsin and retinal are separated). For example, suppose you go into a dark building on a bright day. It will take several seconds for your eyes to adjust to the dark as opsin and retinal reassociate to form rhodopsin in the rod cells, which can then react to the dim light. A person with a vitamin A deficiency may have a condition called night blindness, characterized by difficulty seeing in dim light. Night blindness can also result from retinal detachment, which is the separation of the sensory retinafrom the pigmented retina. Retinal detachment affects the periph-ery of the retina, where the rods are located, more than the center of the retina, where the cones are located. Because the rods are more sensitive than the cones to light, retinal detachment affects vision in low light to a greater extent than vision in bright light.

The photosensitive pigments in cone cells are slightly different from those in rod cells. The pigments in cone cells are sensitive to colors. Each color results from stimulation by a certain wavelength of light. Three major types of color-sensitive opsin exist; they are sensi-tive to blue, red, or green. The many colors that we can see result from the stimulation of combinations of these three types of cones.

The rod and cone cells synapse with bipolar cells of the sen-sory retina (see figure 9.12). These and the horizontal cells of the retina modify the output of the rod and cone cells. For example, this modification helps us perceive the borders between objects of contrasting brightness. The bipolar and horizontal cells synapse with ganglion cells, whose axons converge at the posterior of the eye to form the optic nerve(II; see figures 9.9 and 9.12a).

When the posterior region of the retina is examined with an ophthalmoscope (of-thal′ mō-skōp), two major features can be observed: the macula and the optic disc (figure 9.14a).

The macula (mak′ ū-lā) is a small spot near the center of the posterior retina. In the center of the macula is a small pit, the fovea (fō′ vē-ă; pit) centralis. The fovea centralis is the part of the retina where lightis most focused when the eye is looking directly at an object. The fovea centralis contains only cone cells, and the cells are more tight-ly packed there than anywhere else in the retina. Hence, the fovea centralis is the region with the greatest ability to discriminate fine images, which explains why objects are best seen straight ahead.

The optic disc is a white spot just medial to the macula, through which a number of blood vessels enter the eye and spread over the surface of the retina. This is also the spot at which axons from the retina meet, pass through the two outer tunics, and exit the eye as the optic nerve. The optic disc contains no photoreceptor cells and does not respond to light; it is therefore called the blindspot of the eye. A small image projected onto the blind spot cannotbe seen (figure 9.14b). 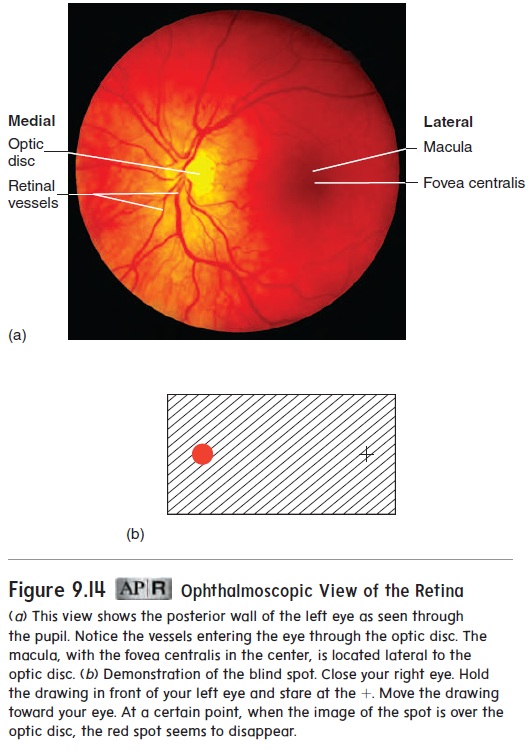 Chambers of the Eye

The anterior and posterior chambers are filled with aqueoushumor (watery fluid), which helps maintain pressure within the eye, refracts light, and provides nutrients to the inner surface of the eye. Aqueous humor is produced by the ciliary body as a blood filtrate and is returned to the circulation through a venous ring that surrounds the cornea. The presence of aqueous humor keeps the eye inflated, much like the air in a basketball. If flow of the aqueous humor from the eye through the venous ring is blocked, the pres-sure in the eye increases, resulting in a condition called glaucoma (see the Diseases and Disorders table). Glaucoma can eventually lead to blindness because the fluid com-presses the retina, thereby restricting blood flow through it.