It has no flow or error control. It is a unidirectional protocol in which data frames are traveling in only one direction-from the sender to receiver. The data link layer of the receiver immediately removes the header from the frame and hands the data packet to its network layer, which can also accept the packet immediately.

Figure 2.6 The design of the simplest protocol with no flow or error control

It is very simple. The sender sends a sequence of frames without even thinking about the receiver. To send three frames, three events occur at the sender site and three events at the receiver site. Note that the data frames are shown by tilted boxes; the height of the box defines the transmission time difference between the first bit and the last bit in the frame.

If data frames arrive at the receiver site faster than they can be processed, the frames must be stored until their use.

In Stop-and-Wait Protocol the sender sends one frame, stops until it receives confirmation from the receiver (okay to go ahead), and then sends the next frame.

Figure 2.9 shows an example of communication using this protocol. It is still very simple. The sender sends one frame and waits for feedback from the receiver. When the ACK arrives, the sender sends the next frame. Note that sending two frames in the protocol involves the sender in four events and the receiver in two events. 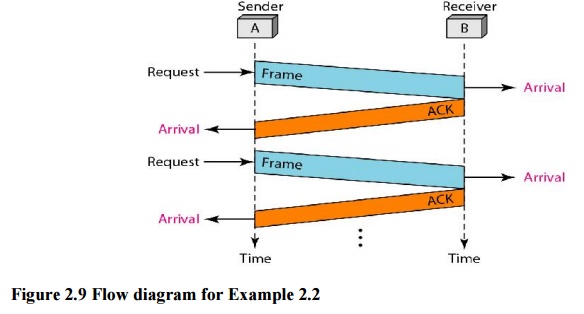