IEEE has defined the specifications for a wireless LAN, called IEEE 802.11, which covers the physical and data link layers.

Wireless communication is one of the fastest-growing technologies. The demand for connecting devices without the use of cables is increasing everywhere. Wireless LANs can be found on college campuses, in office buildings, and in many public areas.

IEEE has defined the specifications for a wireless LAN, called IEEE 802.11, which covers the physical and data link layers.

The BSS without an AP is a stand-alone network and cannot send data to other BSSs. It is called an ad hoc architecture. In this architecture, stations can form a network without the need of an AP; they can locate one another and agree to be part of a BSS. A BSS with an AP is sometimes referred to as an infrastructure network

One of the two protocols defined by IEEE at the MAC sublayer is called the distributed coordination function (DCF). DCF uses CSMAICA as the access method.

1.        For collision detection a station must be able to send data and receive collision signals at the same time. This can mean costly stations and increased bandwidth requirements.

2.        Collision may not be detected because of the hidden station problem.

3.        The distance between stations can be great. Signal fading could prevent a station at one end from hearing a collision at the other end.

When a station sends an RTS frame, it includes the duration of time that it needs to occupy the channel. The stations that are affected by this transmission create a timer called a network allocation vector (NAV) that shows how much time must pass before these stations are allowed to check the channel for idleness. Each time a station accesses the system and sends an RTS frame, other stations start their NAV.

The point coordination function (PCF) is an optional access method that can be implemented in an infrastructure network (not in an ad hoc network). It is implemented on top of the DCF and is used mostly for time-sensitive transmission. PCF has a centralized, contention-free polling access method. The AP performs polling for stations that are capable of being polled. The stations are polled one after another, sending any data they have to the AP. 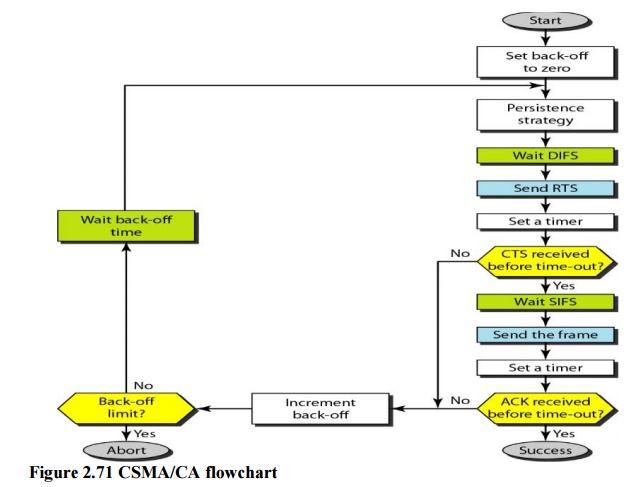 Addresses. There are four address fields, each 6 bytes long. The meaning of each addressfield depends on the value of the To DS and From DS subfields.

Sequence control. This field defines the sequence number of the frame to be used inflow control.

Frame body. This field, which can be between 0 and 2312 bytes, contains informationbased on the type and the subtype defined in the FC field.