Asynchronous Transfer Mode (ATM) is the cell relay protocol designed by the ATM Forum and adopted by the ITU-T.

Asynchronous Transfer Mode (ATM) is the cell relay protocol designed by the ATM Forum and adopted by the ITU-T. The combination of ATM and SONET will allow high-speed interconnection of all the world's networks. In fact, ATM can be thought of as the "highway" of the information superhighway.

Among the challenges faced by the designers of ATM, six stand out.

a)   Foremost is the need for a transmission system to optimize the use of high-data-rate transmission media, in particular optical fiber. In addition to offering large bandwidths, newer transmission media and equipment are dramatically less susceptible to noise degradation. A technology is needed to take advantage of both factors and thereby maximize data rates.

b)  The system must interface with existing systems and provide wide-area interconnectivity between them without lowering their effectiveness or requiring their replacement.

c) The design must be implemented inexpensively so that cost would not be a barrier to adoption. If ATM is to become the backbone of international communications, as intended, it must be available at low cost to every user who wants it.

d)       The new system must be able to work with and support the existing telecommunications hierarchies (local loops, local providers, long-distance carriers, and so on)

e) The new system must be connection-oriented to ensure accurate and predictable delivery.

Before ATM, data communications at the data link layer had been based on frame switching and frame networks. Different protocols use frames of varying size and intricacy. As networks become more complex, the information that must be carried in the header becomes more extensive. The result is larger and larger headers relative to the size of the data unit. In response, some protocols have enlarged the size of the data unit to make header use more efficient. Unfortunately, large data fields create waste. If there is not much information to transmit, much of the field goes unused. To improve utilization, some protocols provide variable frame sizes to users.

The variety of frame sizes makes traffic unpredictable. Switches, multiplexers, and routers must incorporate elaborate software systems to manage the various sizes of frames. A great deal of header information must be read, and each bit counted and evaluated to ensure the integrity of every frame. Internetworking among the different frame networks is slow and expensive at best, and impossible at worst.

Many of the problems associated with frame internetworking are solved by adopting a concept called cell networking. A cell is a small data unit of fixed size. In a cell network, which uses the cell as the basic unit of data exchange, all data are loaded into identical cells that can be transmitted with complete predictability and uniformity. As frames of different sizes and formats reach the cell network from a tributary network, they are split into multiple small data units of equal length and are loaded into cells. The cells are then multiplexed with other cells and routed through the cell network.

ATM uses asynchronous time-division multiplexing-that is why it is called Asynchronous Transfer Mode-to multiplex cells corning from different channels. It uses fixed-size slots (size of a cell). ATM multiplexers fill a slot with a cell from any input channel that has a cell; the slot is empty if none of the channels has a cell to send

Cell networks are based on virtual circuits (VCs). All cells belonging to a single message follow the same virtual circuit and remain in their original order until they reach their destination. Think of a virtual circuit as the lanes of a highway (virtual path).

The ATM standard defines three layers. They are, from top to bottom, the application adaptation layer, the ATM layer, and the physical layer. The endpoints use all three layers while the switches use only the two bottom layers.

Like Ethernet and wireless LANs, ATM cells can be carried by any physical layer carrier. 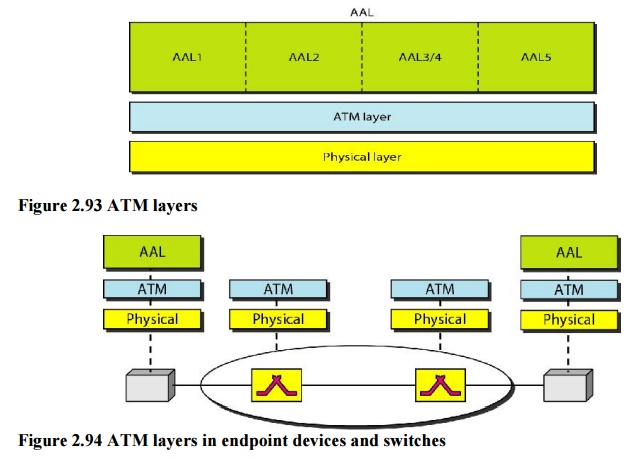 The ATM layer provides routing, traffic management, switching, and multiplexing services. It processes outgoing traffic by accepting 48-byte segments from the AAL sublayers and transforming them into 53-byte cells by the addition of a 5-byte header.