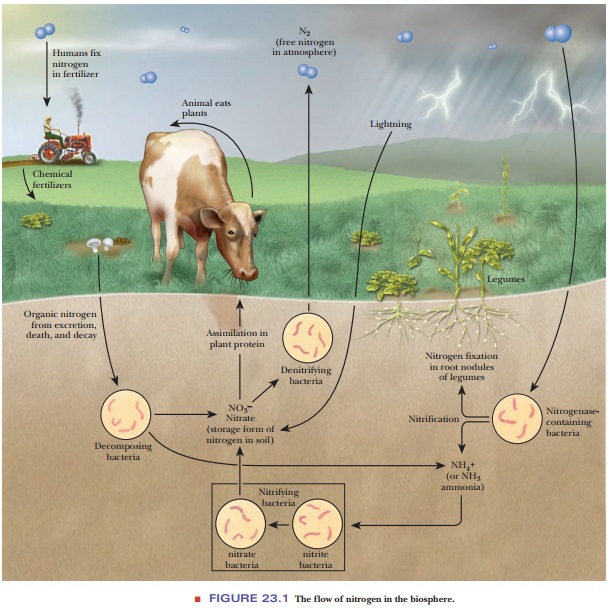 We have seen the structures of many types of compounds that contain nitrogen, including amino acids, porphyrins, and nucleotides, but we have not discussed their metabolism.

We have seen the structures of many types of compounds that contain nitrogen, including amino acids, porphyrins, and nucleotides, but we have not discussed their metabolism. The metabolic pathways we have dealt with up to now have mainly involved compounds of carbon, hydrogen, and oxygen, such as sugars and fatty acids. Several important topics can be included in our discussion of the metabolism of nitrogen. The first of these is nitrogen fixation, the process by which inorganic molecular nitrogen from the atmosphere (N2) is incorporated first into ammonia and then into organic compounds that are of use to organisms. Nitrate ion (NO3–), another kind of inorganic nitrogen, is the form in which nitrogen is found in the soil, and many fertilizers contain nitrates, frequently potassium nitrate. The process of nitrification (nitrate reduction to ammonia) provides another way for organisms to obtain nitrogen. Nitrate ion and nitrite ion (NO2–) are also involved in denitrification reactions, which return nitrogen to the atmosphere (Figure 23.1). 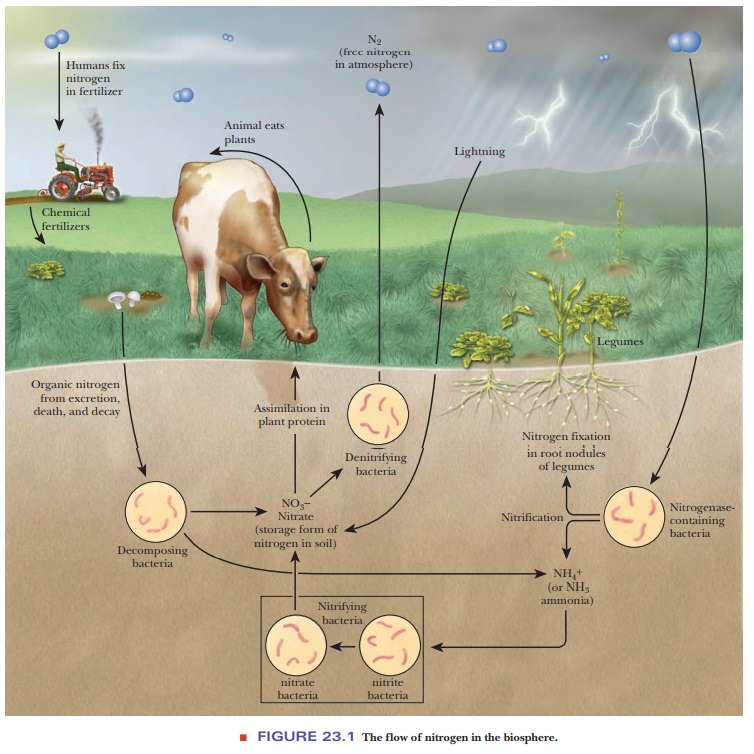 Ammonia formed by either pathway, nitrogen fixation or nitrification, enters the biosphere. Ammonia is converted to organic nitrogen by plants, and organic nitrogen is passed to animals through food chains. Finally, animal waste products, such as urea, are excreted and degraded to ammonia by micro-organisms. The word ammonia comes from sal ammoniac (ammonium chlo-ride), which was first prepared from the dung of camels at the temple of Jupiter Ammon in North Africa. The process of death and decay releases ammonia in both plants and animals. Denitrifying bacteria reverse the conversion of ammo-nia to nitrate and then recycle the NO3– as free N2 (Figure 23.1).

The topic of nitrogen metabolism includes the biosynthesis and breakdown of amino acids, purines, and pyrimidines; also, the metabolism of porphyrins is relatedto that of amino acids. Many of these pathways, particularly the anabolic ones, are long and complex. In discussing pathways in which the amount of material is large and highly detailed, we shall concentrate on the most important points. Specifically, we shall concentrate on overall patterns and on interesting reac-tions of wide applicability. We shall also be interested in health-related aspects of this material. Other reactions will be found at the BiochemistryNow Interactive website for this text.

Atmospheric nitrogen (N2) is not highly reactive, but it must be converted to ammonia or to nitrates to be biologically useful, first to plants, then to animals.

Nitrogen compounds in the biosphere include amino acids, purines, and pyrimidines. Their pathways for biosynthesis and breakdown tend to be long and complex.