Ammonia is toxic in high concentrations, and so it must be incorporated into biologically useful compounds when it is formed by the reactions of nitrogen fixation discussed earlier. The amino acids glutamate and glutamine are of central importance in the process. Glutamate arises from α-ketoglutarate, andglutamineis formed from glutamate (Figure 23.5).The production of glutamate is a reductive amination, and the production of glutamine is amidation. In other reactions of amino acid anabolism the α-amino group of glutamate and the side-chain amino group of glutamine areshifted to other compounds in transamination reactions.

What are some common features in amino acid biosynthesis?

The biosynthesis of amino acids involves a common set of reactions. In addition to transamination reactions, transfer of one-carbon units, such as formyl or methyl groups, occurs frequently. We are not going to discuss all the details of the reactions that give rise to amino acids. We can, however, organize this material by grouping amino acids into families based on common precursors (Figure 23.6). The reactions of some of the individual families of amino acids provide good examples of reactions that are of general importance, such as transamination and one-carbon transfer. 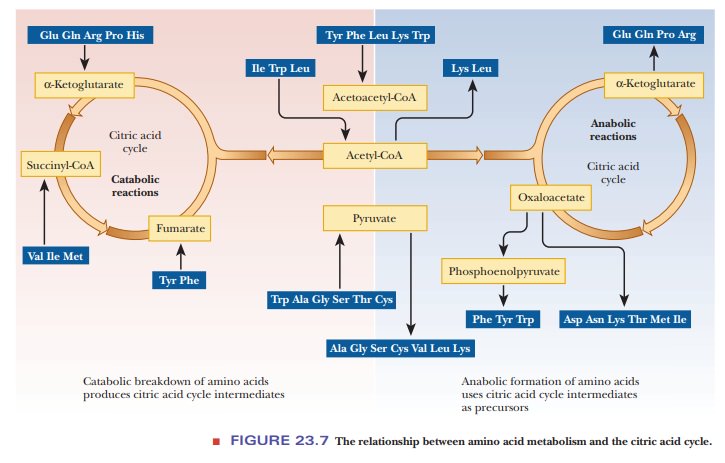 Glutamate is formed from NH4+ and α-ketoglutarate in a reductive amination that requires NADPH. This reaction is reversible and is catalyzed by glutamatedehydrogenase (GDH).

The conversion of glutamate to glutamine is catalyzed by glutamine synthe-tase (GS) in a reaction that requires ATP (see Figure 23.5b).

These reactions fix inorganic nitrogen (NH3), forming organic (carbon-containing) nitrogen compounds, such as amino acids, but they frequently do not operate in this sequential fashion.

In fact, the combination of GDH and GS is responsible for most of the assimilation of ammonia into organic compounds, especially in organisms that are rich in nitrogen sources. However, the KM of GS is considerably lower than that of GDH. When nitrogen is limiting, as is frequently the case in plants, the conversion of glutamate to glutamine is the preferred mode of nitrogen assimilation. This means that the supply of glutamate becomes depleted unless there is some way to replenish it. The reductive amination of α-ketoglutarate with the amide nitrogen of glutamine as the nitrogen source is the way this is done.

The reductant can be NADH, NADPH (in yeast and bacteria), or reduced ferredoxin (in plants). The enzyme that catalyzes this reaction is glutamate synthase; it is also known as glutamate:oxoglutarate aminotransferase (GOGAT). A GS/GOGAT complex exists in plants and allows them to cope with conditions of limited nitrogen availability. Enzymes that catalyze transamination reactions require pyridoxal phosphate as a coenzyme (Figure 23.8). 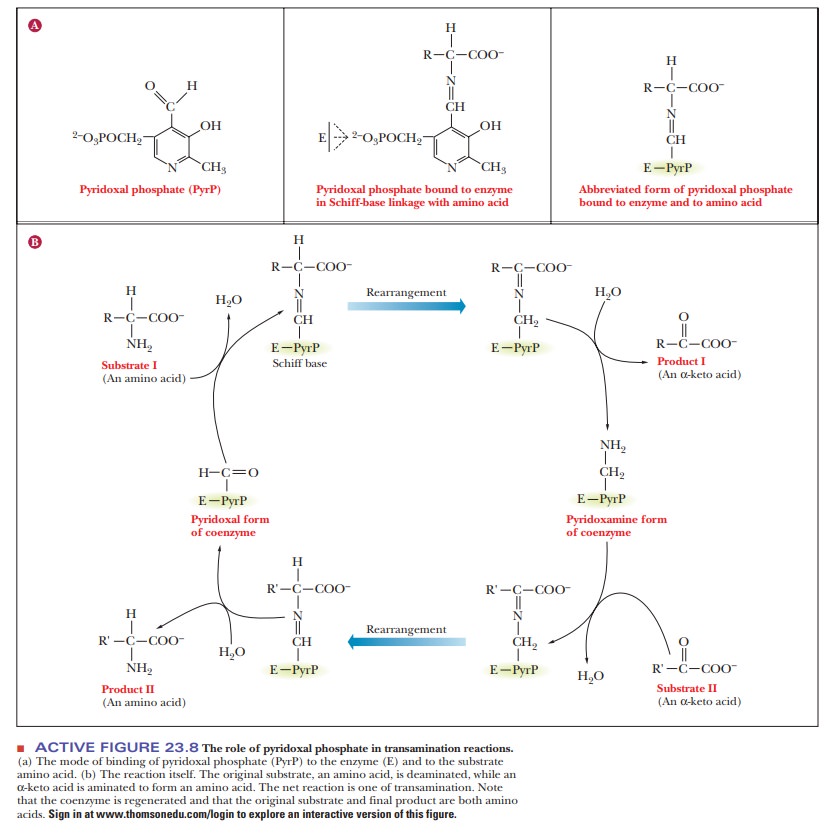 Pyridoxal phosphate (PyrP) forms a Schiff base with the amino group of Substrate I (the amino-group donor). The next stage is a rearrangement fol-lowed by hydrolysis, which removes Product I (the α-keto acid corresponding to Substrate I). The coenzyme now carries the amino group (pyridoxamine). Substrate II (another α-keto acid) then forms a Schiff base with pyridoxamine. Again there is a rearrangement followed by a hydrolysis, which gives rise to Product II (an amino acid) and regenerates pyridoxal phosphate. The net reac-tion is that an amino acid (Substrate I) reacts with anα-keto acid (Substrate II) to form an α-keto acid (Product I) and an amino acid (Product II).

The amino group has been transferred from Substrate I to Substrate II, forming the amino acid, Product II. The overall reaction can be seen for a general case and for a specific case in Figure 23.9. When not involved with one of the substrates, the pyridoxal group is bound in a Schiff-base linkage to an active site ε-NH2 group of lysine. Pyridoxal phosphate is a versatile coenzyme that is also involved in other reactions, including decarboxylations, racemizations, and movement of hydroxymethyl groups, as we shall see with the conversion of serine to glycine. 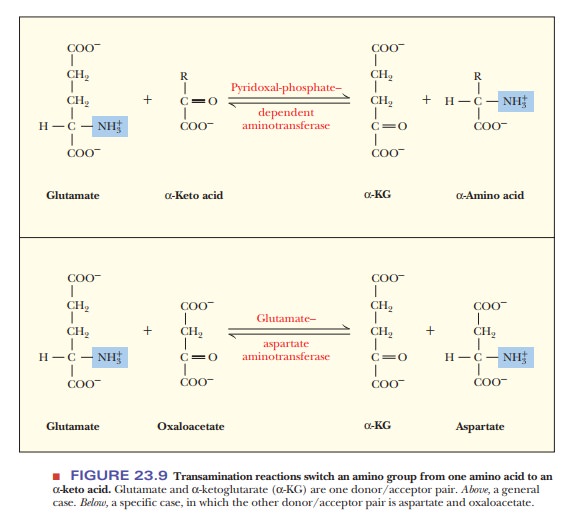 What is the importance of one-carbon transfers?

In addition to transamination reactions, one-carbon transfer reactions occur frequently in amino acid biosynthesis. A good example of a one-carbon transfer can be found in the reactions that produce the amino acids of the serine family. This family also includes glycine and cysteine. Serine and glycine themselves are frequently precursors in other biosynthetic pathways. A discussion of the synthesis of cysteine will give us some insight into the metabolism of sulfur, as well as that of nitrogen.

The ultimate precursor of serine is 3-phosphoglycerate, which is obtainable from the glycolytic pathway. The hydroxyl group on carbon 2 is oxidized to a keto group, giving anα-keto acid. A transamination reaction in which gluta-mate is the nitrogen donor produces 3-phosphoserine and α-ketoglutarate. Hydrolysis of the phosphate group then gives rise to serine (Figure 23.10).

The conversion of serine to glycine involves the transfer of a one-carbon unit from serine to an acceptor. This reaction is catalyzed by serine hydroxymethylase, with pyridoxal phosphate as a coenzyme. The acceptor in this reaction is tetra-hydrofolate, a derivative of folic acid and a frequently encountered carrier ofone-carbon units in metabolic pathways. Its structure has three parts: a substi-tuted pteridine ring, p-aminobenzoic acid, and glutamic acid (Figure 23.11). Folic acid is a vitamin that has been identified as essential in preventing birth defects; consequently, it is now a recommended supplement for all women of child-bearing age. There is also some evidence that folic acid may prevent heart disease in both men and women over age 50. 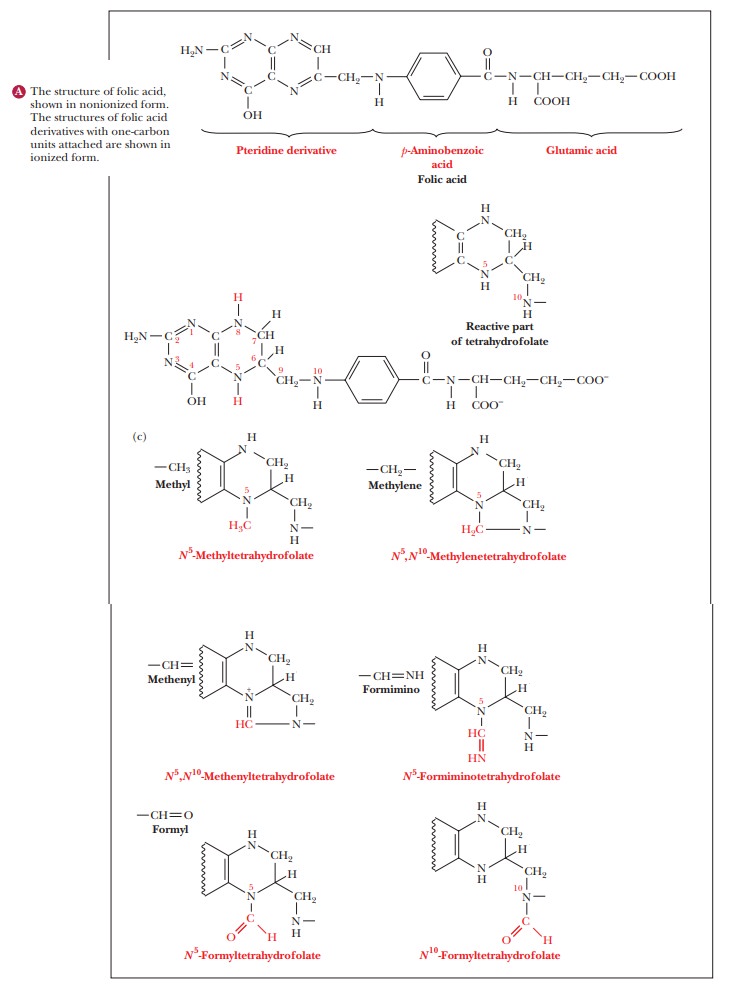 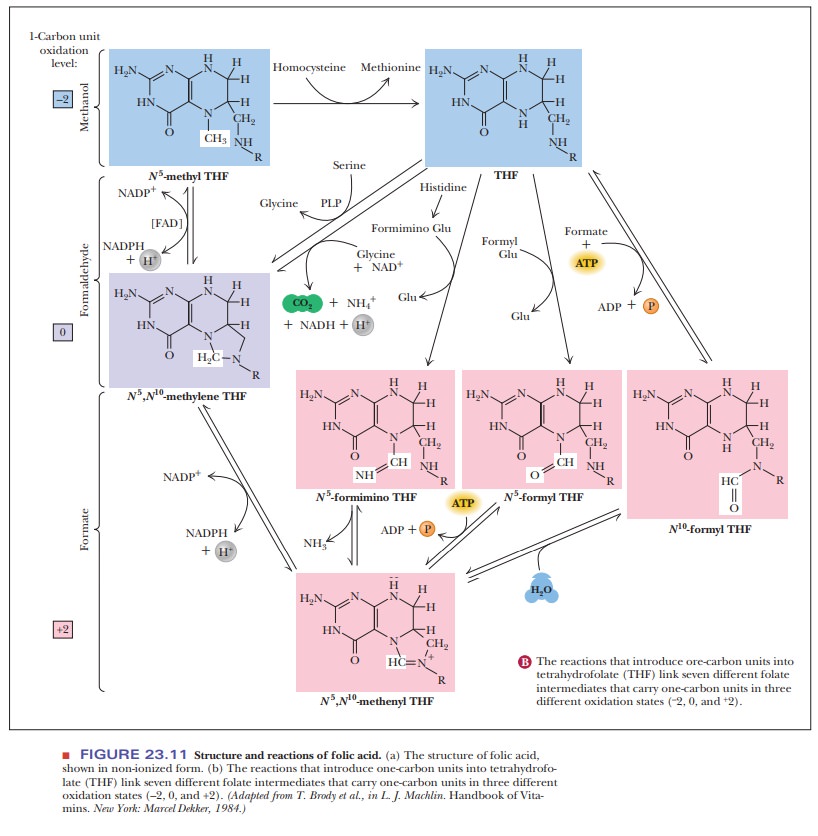 The conversion of serine to cysteine involves some interesting reactions. The source of the sulfur in animals differs from that in plants and bacteria. In plants and bacteria, serine is acetylated to form O-acetylserine. This reaction is cata-lyzed by serine acyltransferase, with acetyl-CoA as the acyl donor (Figure 23.13). Conversion of O-acetylserine to cysteine requires production of sulfide by a sulfur donor. The sulfur donor for plants and bacteria is 3'-phospho-5'-adenylyl sulfate. The sulfate group is reduced first to sulfite and then to sulfide (Figure 23.14). The sulfide, in the conjugate acid form HS–, displaces the acetyl group of the O-acetylserine to produce cysteine. Animals form cysteine from serine by a different pathway because they do not have the enzymes to carry out the sulfate-to-sulfide conversion that we have just seen. The reaction sequence in animals involves the amino acid methionine. 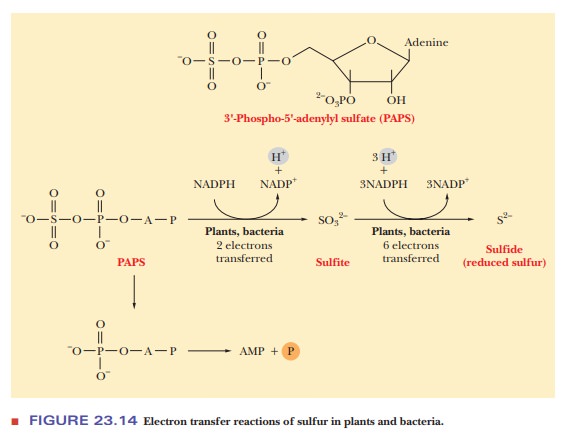 Methionine, which is produced by reactions of the aspartate family (see the BiochemistryNow Interactive website at www.thomsonedu.com/login) in bacte-ria and plants, cannot be produced by animals. It must be obtained from dietary sources. It is an essential amino acid because it cannot be synthesized by the body. The ingested methionine reacts with ATP to form S-adenosylmethionine(SAM), which has a highly reactive methyl group (Figure 23.15). This compoundis a carrier of methyl groups in many reactions. The methyl group from S-adenosylmethionine can be transferred to any one of a number of acceptors, producing S-adenosylhomocysteine. Hydrolysis of S-adenosylhomocysteine in turn produces homocysteine. Cysteine can be synthesized from serine and homocysteine, and this pathway for cysteine biosynthesis is the only one available to animals (Figure 23.16). Serine and homocysteine react to produce cystathio-nine, which hydrolyzes to form cysteine, NH4+, and α-ketobutyrate. 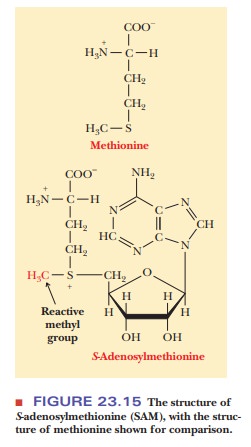 Two of the most important classes of reactions in the biosynthesis of amino acids are transamination reactions and one-carbon transfers.

The amino acids glutamate and glutamine are the principal donors of amino groups in transamination reactions.

Carriers of one-carbon groups include biotin, S-adenosylmethionine, and derivatives of folic acid.