A deficiency of the HGPRT enzyme is the cause of Lesch–Nyhan syndrome, a genetic disease.

A deficiency of the HGPRT enzyme is the cause of Lesch–Nyhan syndrome, a genetic disease. The biochemical consequences include an elevated concentration of PRPP and increased production of purines and uric acid. The accumulation of uric acid leads to kidney stones and gout, but the most striking clinical manifestations are neurological in nature. There is a compulsive tendency toward self-mutilation among patients with Lesch–Nyhan syndrome; they tend to bite off their fingertips and parts of their lips. The development of kidney stones and gouty symptoms can be prevented by administering allopurinol, but there is no real treatment for the self-destructive behavior and the mental retardation and spasticity that accompany it. The diverse manifestations of this disease show clearly that metabolism is extremely complex and that the failure of one enzyme to function can have consequences that reach far beyond the reaction that it catalyzes. 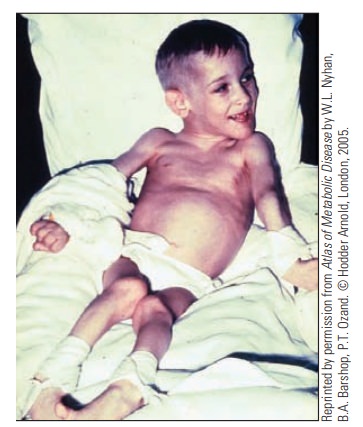