The Anabolism of Pyrimidine Nucleotides

The reaction of carbamoyl phosphate with aspartate to produce N-carbamo-ylaspartate is the committed step in pyrimidine biosynthesis. The compounds involved in reactions up to this point in the pathway can play other roles in metabolism; after this point, N-carbamoylaspartate can be used only to pro-duce pyrimidines—thus the term “committed step.” This reaction is catalyzed by aspartate transcarbamoylase, which we discussed in detail as a prime example of an allosteric enzyme subject to feedback regulation. The next step, the conversion of N-carbamoylaspartate to dihydroorotate, takes place in a reaction that involves an intramolecular dehydration (loss of water) as well as cyclization. This reaction is catalyzed by dihydroorotase. Dihydroorotate is converted to orotate by dihydroorotate dehydrogenase, with the concomitant conversion of NAD+ to NADH. A pyrimidine nucleotide is now formed by the reaction of orotate with PRPP to give orotidine-5'-monophosphate (OMP), which is a reaction similar to the one that takes place in purine salvage. Orotate phosphoribosyltransferase catalyzes this reaction. Finally, orotidine-5'-phosphate decarboxylase catalyzes the conversion of OMP to UMP (uridine-5'-monophosphate), which is the precursor of the remaining pyrimi-dine nucleotides (Figure 23.26). 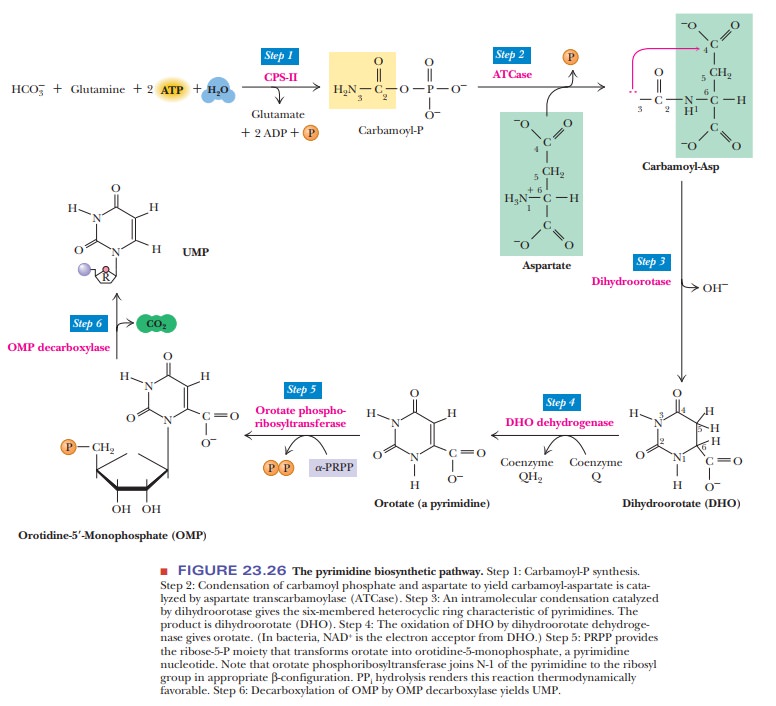 Two successive phosphorylation reactions convert UMP to UTP (Figure 23.27). The conversion of uracil to cytosine takes place in the triphosphate form, catalyzed by CTP synthetase (Figure 23.28). Glutamine is the nitrogen donor, and ATP is required, as we saw earlier in similar reactions. 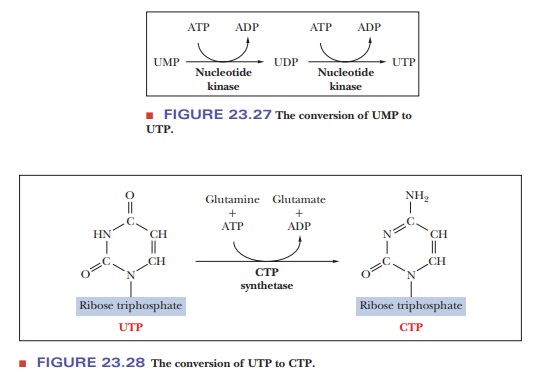 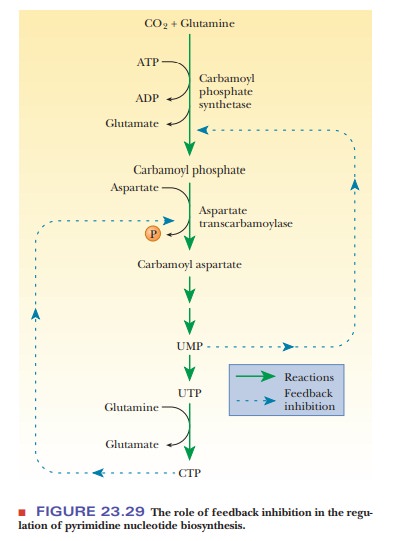 The ring system of pyrimidines is assembled before it is attached to ribose phosphate.

During breakdown, the nucleoside is formed first, then the base. Ring-opening reactions of the base complete the degradation.