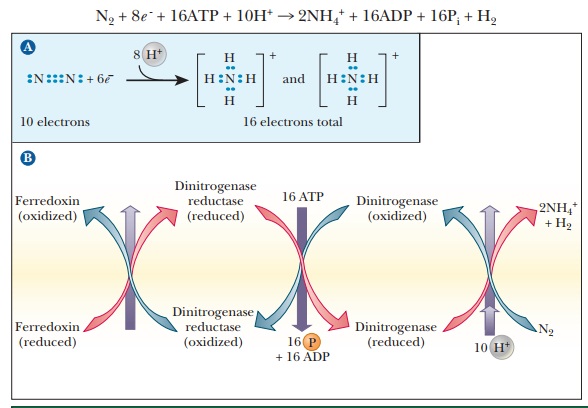 How is nitrogen from the atmosphere incorporated into biologically useful compounds?

Bacteria are responsible for the reduction of N2 to ammonia (NH3). Typical nitrogen-fixing bacteria are symbiotic organisms that form nodules on the roots of leguminous plants, such as beans and alfalfa. Many free-living microbes and some cyanobacteria also fix nitrogen. Plants and animals cannot carry out nitrogen fixation. This conversion of molecular nitrogen to ammonia is the only source of nitrogen in the biosphere except for that provided by nitrates. The conjugate acid form of NH3, ammonium ion (NH4+), is the form of nitrogen that is used in the first stages of the synthesis of organic compounds. Parenthetically, NH3 obtained by chemical synthesis from nitrogen and hydrogen is the starting point for the production of many synthetic fertilizers, which frequently contain nitrates.

How is nitrogen from the atmosphere incorporated into biologically useful compounds?

The nitrogenase enzyme complex found in nitrogen-fixing bacteria catalyzes the production of ammonia from molecular nitrogen. The half-reaction of reduction (Figure 23.2a) is in which six electrons are used to reduce molecular nitrogen to ammonium ion. 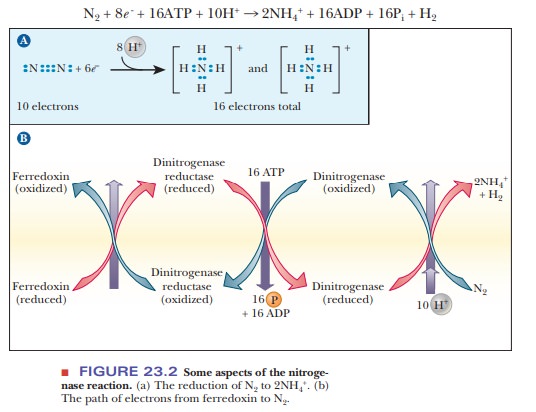 An additional two electrons are used to reduce hydrogen ion to H2. The total reaction catalyzed by nitrogenase is an eight-electron reduction.

The half-reaction of oxidation varies because different organisms vary in terms of the substance oxidized to supply electrons. Several proteins are included in the nitrogenase complex. Ferredoxin is one of them (this protein also plays an important role in electron transfer in photosynthesis;). There are also two proteins specific to the nitrogenase reaction. One is an iron–sulfur (Fe–S) protein called dinitrogenase reductase. The other is an iron–molybdenum (Fe–Mo) protein, called dinitrogenase. The flow of electrons is from ferredoxin to dinitrogenase reductase to dinitrogenase to nitrogen (Figure 23.2b). The nature of the nitrogenase complex is a subject of active research. Significant progress has been made in this work with the deter-mination by X-ray crystallography of the three-dimensional structure of both the Fe protein and the Fe–Mo protein from Azotobacter vinelandii (Figure 23.3). The Fe protein is a dimer (“the iron butterfly”), with the iron–sulfur cluster located at the butterfly’s head. The nitrogenase is even more complicated, with several types of subunits arranged into tetramers. Ferredoxin, dinitrogenase reductase, and dinitrogenase combine to perform a series of single-electron transfers, eventually transferring the eight electrons necessary to complete the reduction of N2 to NH4+. It is worth noting that the reactions of nitrogen fixa-tion consume a great deal of energy. It is estimated that about half of the ATP produced from photosynthesis in legumes is used to fix nitrogen. 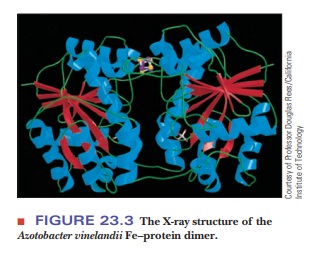 Nitrogen enters the biosphere by the process of nitrogen fixation. Atmospheric nitrogen is converted to ammonia in its conjugate acid form, ammonium ion.