How is inosine monophosphate convertedto AMP and GMP? What are the energy requirements for production of AMP and GMP?

In the synthesis of purine nucleotides, the growing ring system is bonded to the ribose phosphate while the purine skeleton is being assembled—first the five-membered ring and then the six-membered ring—eventually producing inosine-5'-monophosphate. All four nitrogen atoms of the purine ring are derived from amino acids: two from glutamine, one from aspartate, and one from glycine. Two of the five carbon atoms (adjacent to the glycine nitrogen) also come from glycine, two more come from tetrahydrofolate derivatives, and the fifth comes from CO2 (Figure 23.20). The series of reactions producing inosine monophosphate (IMP) is long and complex. 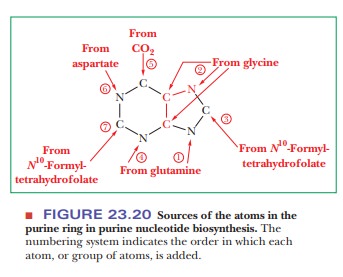 How is inosine monophosphate convertedto AMP and GMP?

The conversion of IMP to GMP also takes place in two stages (Figure 23.21). The first of the two steps is an oxidation in which the C—H group at the C-2 position is converted to a keto group. The oxidizing agent in the reaction is NAD+, and the enzyme involved is IMP dehydrogenase. The nucleotide formed by the oxidation reaction is xanthosine-5'-phosphate (XMP). 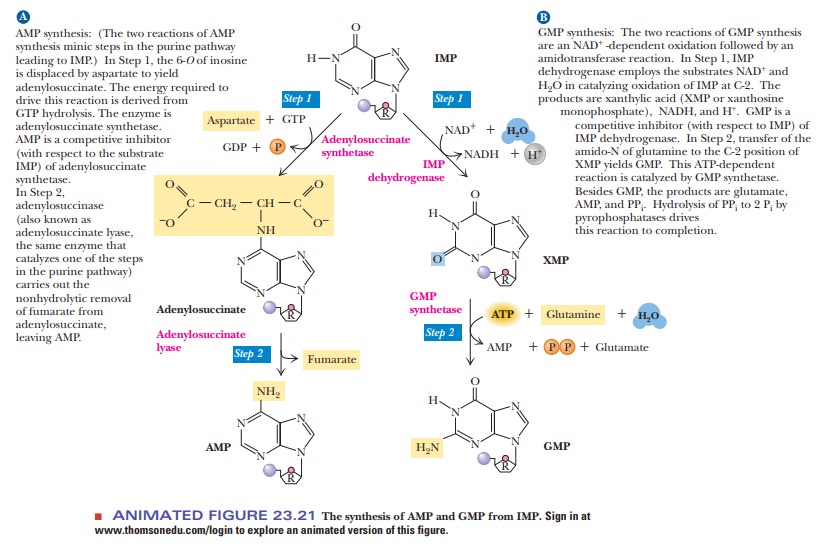 Subsequent phosphorylation reactions produce purine nucleoside diphos-phates (ADP and GDP) and triphosphates (ATP and GTP). The purine nucleoside monophosphates, diphosphates, and triphosphates are all feedback inhibitors of the first stages of their own biosynthesis. Also, AMP, ADP, and ATP inhibit the conversion of IMP to adenine nucleotides, and GMP, GDP, and GTP inhibit the conversion of IMP to xanthylate and to guanine nucleotides (Figure 23.22). 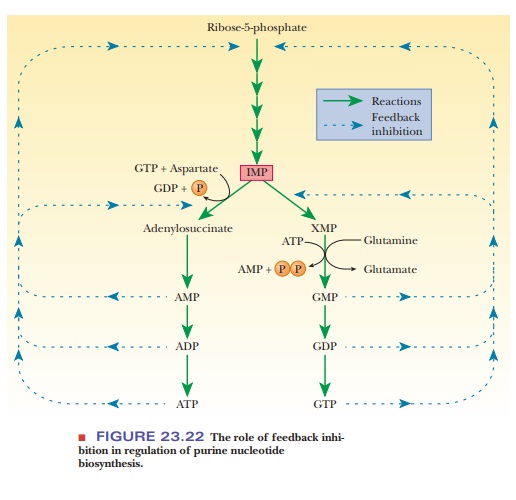 What are the energy requirements for production of AMP and GMP?

The process is more efficient for aerobic organisms. Since 30 or 32 ATP result from each molecule of glucose, depending on the type of tissue, aerobic organisms can optimally produce four AMP (requiring 32 ATP) or three GMP (requiring 36 ATP) for each molecule of glucose oxidized. A mechanism for reuse of purines, rather than complete turnover and new synthesis, saves energy for organisms.

The growing ring system of purines is attached to ribose phosphate during the synthesis process.

The biosynthesis of nucleotides requires considerable expenditures of energy by organisms in long and complex pathways. Feedback inhibition at all stages plays a key role in regulating the pathway.