The biosynthetic pathways that produce amino acids and the bases of nucleotides (purines and pyrimidines) are long and complex, requiring a large investment of energy by the organism.

The biosynthetic pathways that produce amino acids and the bases of nucleotides (purines and pyrimidines) are long and complex, requiring a large investment of energy by the organism. If there is a high level of some end product, such as an amino acid or a nucleotide, the cell saves energy by not making that compound. However, the cell needs a signal to tell it to stop producing more of that particular compound. The signal is frequently part of a feedback inhibition mechanism, in which the end product of a metabolic pathway inhibits an enzyme at the beginning of the pathway. We saw an example of such a control mechanism. This enzyme catalyzes one of the early stages of pyrimidine nucleotide biosynthesis, and it is inhibited by the end product of that pathway—namely, cytidine triphosphate (CTP). Feedback inhibition is frequently encountered in the biosynthesis of amino acids and nucleotides. Another prime example of allosteric regulation by feedback inhibition is found in the activity of the enzyme glutamine synthetase, one of the key enzymes in amino acid biosynthesis (Figure 23.4). Nine allosteric inhibitors are involved here (glycine, alanine, serine, histidine, tryptophan, CTP, AMP, carbamoyl phosphate, and glucosamine-6-phosphate). 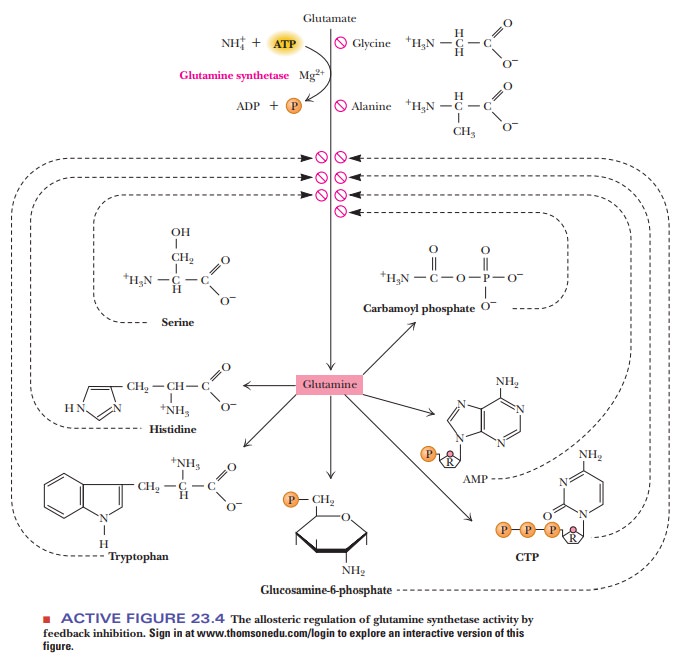 Glycine, alanine, and serine are key indicators of amino acid metabolism in the cell. Each of the other six compounds represents an end product of a biosynthetic pathway that depends on glutamine. Feedback inhibition is very effective because a single product molecule can inhibit an enzyme capable of synthesizing many hundreds or thousands of product molecules.

Because the biosynthetic pathways for many nitrogen-containing com-pounds are long and complex, organisms save energy by inactivating these pathways when the compounds in question are not needed. This is frequently achieved by feedback inhibition.