1. Hershey and Chase experiment with bacteriophage showed that

a) Protein gets into the bacterial cells

b) DNA is the genetic material

2. DNA and RNA are similar with respect to

a) Thymine as a nitrogen base

b) A single-stranded helix shape

3. A mRNA molecule is produced by

4. The total number of nitrogenous bases in human genome is estimated to be about

5. E. coli cell grown on 15N medium are transferred to 14N medium and allowed to grow for two generations. DNA extracted from these cells is ultracentrifuged in a cesium chloride density gradient. What density distribution of DNA would you expect in this experiment?

(a) One high and one low density band.

(b) One intermediate density band.

(c) One high and one intermediate density band.

(d) One low and one intermediate density band.

6. What is the basis for the difference in the synthesis of the leading and lagging strand of DNA molecules?

(a) Origin of replication occurs only at the 5' end of the molecules.

(c) DNA polymerase can join new nucleotides only to the 3' end of the growing stand.

(d) Helicases and single-strand binding proteins that work at the 5' end.

7. Which of the following is the correct sequence of event with reference to the central dogma?

8. Which of the following statements about DNA replication is not correct?

(a) Unwinding of DNA molecule occurs as hydrogen bonds break.

(b) Replication occurs as each base is paired with another exactly like it.

(c) Process is known as semi conservative replication because one old strand is conserved in the new molecule.

(d) Complementary base pairs are held together with hydrogen bonds.

9. Which of the following statements is not true about DNA replication in eukaryotes?

(a) Replication begins at a single origin of replication.

(b) Replication is bidirectional from the origins.

(c) Replication occurs at about 1 million base pairs per minute.

(d) There are numerous different bacterial chromosomes, with replication ocurring in each at the same time.

(c) DNA is the genetic material

(a) Protein that suppresses gene expression

(b) Protein that accelerates gene expression

(d) Gene that switched other genes on or off

14. When lactose is present in the culture medium:

(b) Repressor is unable to bind to the operator.

(c) Repressor is able to bind to the operator.

15. Give reasons: Genetic code is ‘universal’.

16. Name the parts marked ‘A’ and ‘B’ in the given transcription unit: 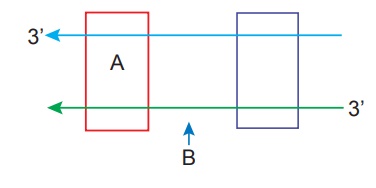 19. Mention any two ways in which single nucleotide polymorphism (SNPs) identified in human genome can bring revolutionary change in biological and medical science.

20. State any three goals of the human genome project.

23. A low level of expression of lac operon occurs at all the windows for treatment of various genetic disorders. Justify the statement.

24. Why the human genome project is called a mega project?

25. From their examination of the structure of DNA, What did Watson and Crick infer about the probable mechanism of DNA replication, coding capability and mutation?

26. Why tRNA is called an adapter molecule?

27. What are the three structural differences between RNA and DNA?

29. a) Identify the figure given below

c) Write the source of energy for this replication and name the enzyme involved in this process.

d) Mention the differences in the synthesis of protein, based on the polarity of the two template strands.

30. If the coding sequence in a transcription unit is written as follows:

Write down the sequence of mRNA.

31. How is the two stage process of protein synthesis advantageous?

32.Why did Hershey and Chase use radioactively labelled phosphorous and sulphur only? Would they have got the same result if they use radiolabelled carbon and nitrogen?

33. Explain the formation of a nucleosome.

34. It is established that RNA is the first genetic material. Justify giving reasons.