The minimal spanning tree algorithm deals with linking the nodes of a network, directly or indirectly, using the shortest total length of connecting branches.

The minimal spanning tree algorithm deals with linking the nodes of a network, directly or indirectly, using the shortest total length of connecting branches. A typical applica-tion occurs in the construction of paved roads that link several rural towns. The road between two towns may pass through one or more other towns. The most economical design of the road system calls for minimizing the total miles of paved roads, a result that is achieved by implementing the minimal spanning tree algorithm.

The steps of the procedure are given as follows. Let N = {I, 2, ….,n} be the set of nodes of the network and define 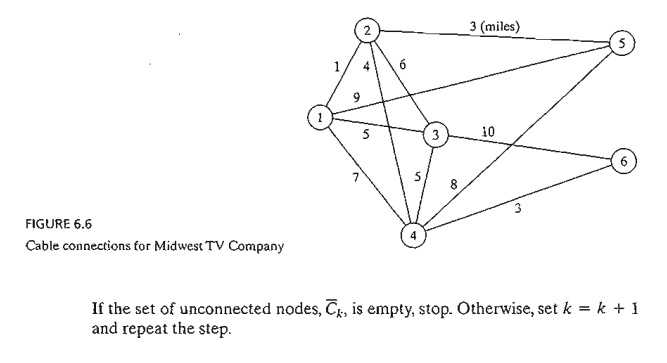 Midwest TV Cable Company is in the process of providing cable service to five new housing development areas. Figure 6.6 depicts possible TV linkages among the five areas. The cable miles are shown on each arc. Determine the most economical cable network.

The algorithm starts at node 1 (any other node will do as well), which gives

The iterations of the algorithm are summarized in Figure 6.7. The thin arcs provide all the candidate links between C and Bar(C). The thick branches represent the permanent links between the nodes of the connected set c: and the dashed branch represents the new (permanent) link added at each iteration. For example, in iteration 1, branch (1,2) is the shortest link (= 1 mile) among all the candidate branches from node 1 to nodes 2,3,4,5, and 6 of the unconnected set Bar(C1). Hence, link (1,2) is made permanent and j* = 2, which yields

The solution is given by the minimal spanning tree shown in iteration 6 of Figure 6.7. The resulting minimum cable miles needed to provide the desired cable service are 1 + 3 + 4 + 3 + 5 = 16 miles. 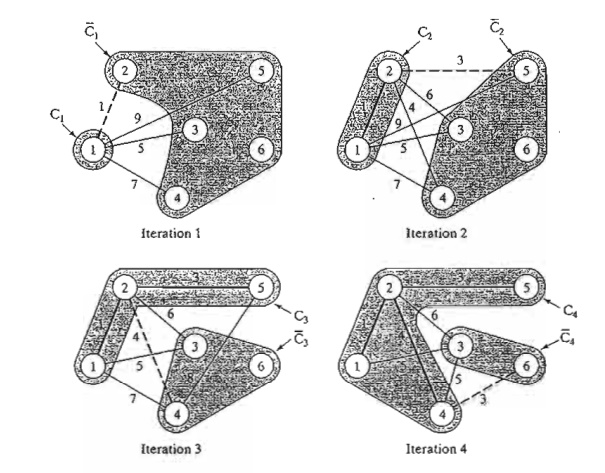 1. Solve Example 6.2-1 starting at node 5 (instead of node 1), and show that the algorithm produces the same solution.

2. Determine the minimal spanning tree of the network of Example 6.2-1 under each of the following separate conditions: 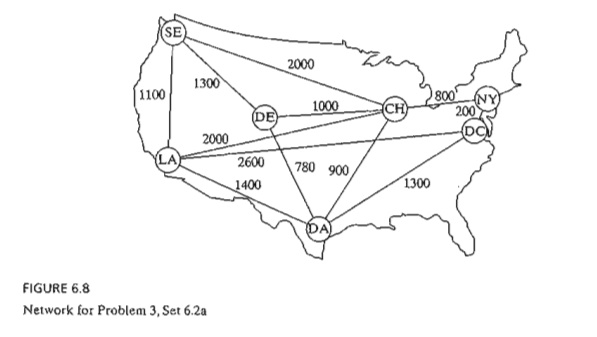 3. In intermodal transportation, loaded truck trailers are Shipped between railroad terminals on special flatbed carts. Figure 6.8 shows the location of the main railroad terminals in the United States and the existing railroad tracks. The objective is to decide which tracks should be "revitalized" to handle the intermodal traffic. In particular, the Los Angeles (LA) terminal must be linked directly to Chicago (CH) to accommodate expected heavy traffic. Other than that, all the remaining terminals can be linked, directly or indirectly, such that the total length (in miles) of the selected tracks is minimized. Determine the segments of the railroad tracks that must be included in the revitalization program.

*5. In Figure 6.9 of Problem 4, suppose that the wellheads can be divided into two groups depending on gas pressure: a high-pressure group that includes wells 2,3,4, and 6, and a low-pressure group that includes wells 5, 7, 8, and 9. Because of pressure difference, it is not possible to link the wellheads from the two groups. At the same time, both groups must be connected to the delivery point through wellhead 1. Determine the minimum pipeline network for this situation. 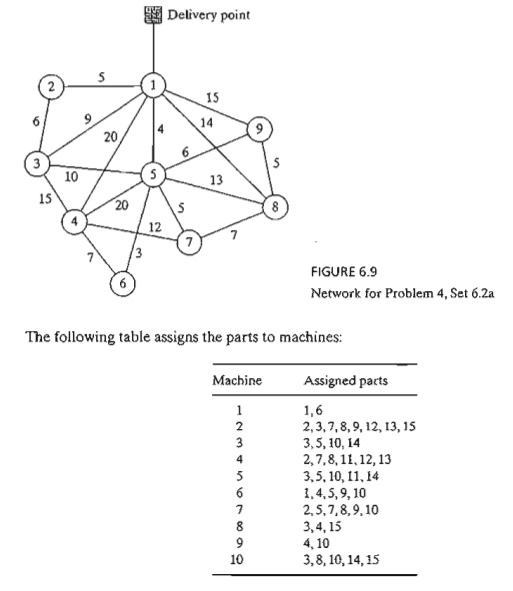 a)     Express the problem as a network model.

b)    Show that the determination of the cells can be based on the minimal spanning tree solution.

c)     For the data given in the preceding table, construct the two- and three-cell solutions.