Managing Care of the Patient in a Cast 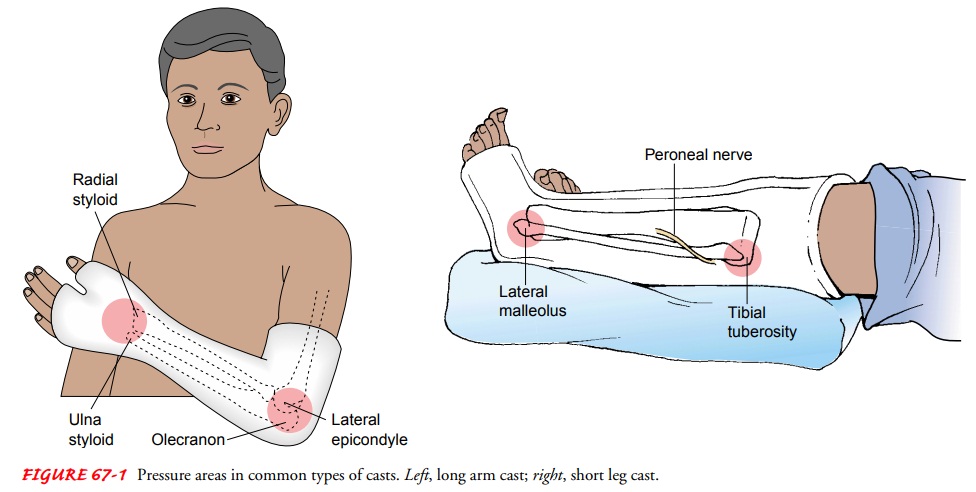 A cast is a rigid external immobilizing device that is molded to the contours of the body.

Managing Care of the Patient in a Cast

A cast is a rigid external immobilizing device that is molded to the contours of the body. The purposes of a cast are to immobilize a body part in a specific position and to apply uniform pressure on encased soft tissue.

A cast is used specifically to immobilize a reduced fracture, to correct a deformity, to apply uniform pressure to underlying soft tissue, or to support and stabilize weakened joints. Generally, casts permit mobilization of the patient while restricting move-ment of a body part.

The condition being treated influences the type and thickness of the cast applied. Generally speaking, the joints proximal and distal to the area to be immobilized are included in the cast. With some fractures, however, cast construction and molding may allow movement of a joint while immobilizing a fracture (eg, three-point fixation in a patellar tendon weight-bearing cast). Various types of casts include the following:

Short arm cast: Extends from below the elbow to the palmarcrease, secured around the base of the thumb. If the thumb is included, it is known as a thumb spica or gauntlet cast.

Long arm cast: Extends from the upper level of the axillary foldto the proximal palmar crease. The elbow usually is im-mobilized at a right angle.

Short leg cast: Extends from below the knee to the base of thetoes. The foot is flexed at a right angle in a neutral position.

Long leg cast: Extends from the junction of the upper and mid-dle third of the thigh to the base of the toes. The knee may be slightly flexed.

Figure 67-1 illustrates the long-arm and long-leg cast and areas in which pressure problems commonly occur with these casts. 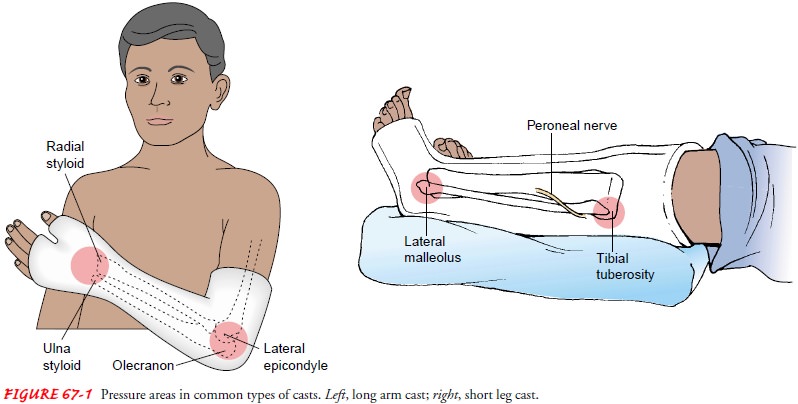 Generally referred to as fiberglass casts, these water-activated polyurethane materials have the versatility of plaster (see later dis-cussion) but are lighter in weight, stronger, water resistant, and durable. They consist of an open-weave, nonabsorbent fabric im-pregnated with cool water-activated hardeners that bond and reach full rigid strength in minutes.

Nonplaster casts are porous and therefore diminish skin prob-lems. They do not soften when wet, which allows for hydrother-apy (use of water for treatment) when appropriate. When wet, they are dried with a hair drier on a cool setting; thorough dry-ing is important to prevent skin breakdown. They are used for nondisplaced fractures with minimal swelling and for long-term wear.

The traditional cast is made of plaster. Rolls of plaster bandage are wet in cool water and applied smoothly to the body. A crys-tallizing reaction occurs, and heat is given off (an exothermic reaction). The heat given off during this reaction can be un-comfortable, and the nurse should inform the patient about the sensation of increasing warmth so that the patient does not be-come alarmed. Additionally, the nurse should explain that the cast needs to be exposed to allow maximum dissipation of the heat and that most casts cool after about 15 minutes.

The crystallization process produces a rigid dressing. The speed of the reaction varies from a few minutes to 15 to 20 min-utes. The orthopedist determines the plaster setting speed appro-priate for the cast being applied. After the plaster sets, the cast remains wet and somewhat soft.

It does not have its full strength until it is dry. While damp, the cast can be dented. Therefore, it must be handled with the palms of the hand and not allowed to rest on hard surfaces or sharp edges. Cast dents may press on the skin causing irritation and skin breakdown. The plaster cast re-quires 24 to 72 hours to dry completely, depending on its thick-ness and the environmental drying conditions. A freshly applied cast should be exposed to circulating air to dry and should not be covered with clothing or bed linens. A wet plaster cast appears dull and gray, sounds dull on percussion, feels damp, and smells musty. A dry plaster cast is white and shiny, resonant, odorless, and firm.