It provides food, fibre, wood, medicine and other biological materials

Land nurtures the plants and animals that provide our food and shelter.

Land is used as watershed or reservoir

Land acts as a dust bin for most of the wastes, created by the modern society.

Land is used for construction of buildings, industries.

Process of degradation of soil or loss of fertility of the soil.

The soil texture and soil structure are deteriorated

Loss of soil fertility, due to loss of invaluable nutrients

Increase in water logging, salinity, and alkalinity and acidity problems.

Loss of economic social and biodiversity.

Land resources degraded by over population &over exploitation.

Increased applications of fertilizers and pesticides leads to pollution of land and water and soil degradation.

Soil erosion, salination and contamination of the soil with industrial wastes all cause land degradation.

Soil erosion is the process of removal of superficial layer of the soil from one place to another.

Soil fertility is lost because of loss of top soil layer.

Loss of its ability to hold water and sediment.

Gradual removal of top soil by the natural process.

The rate of erosion is slower.

The rate of erosion is much faster than the rate of formation of soil.

Earlier there were few reports of landslides between Rishikesh and Byasi on Badrinath Highway area. But, after the highway was constructed, 15 landslides occurred in a single year.

During the construction of roads, mining activities etc. huge portions of fragile mountainous areas are cut or destroyed by dynamite and thrown into adjacent valleys and streams.

These land masses weaken the already fragile mountain slopes and lead to landslides.

They also increase the turbidity of various nearby streams, thereby reducing their productivity.

Sheet erosion: When there is uniform removal of a thin layer of soil from a large surface area, it is called sheet erosion.

Rill erosion: when there is rainfall and rapidly running water produces finger-shaped grooves or rills over the area, it is called rill erosion.

Gully erosion: When the rainfall is very heavy, deeper cavities or gullies are formed, which may be U or V shaped.

Slip erosion: This occurs due to heavy rainfall on slopes of hills and mountains.

Stream bank erosion: During the rainy season, when fast running streams take a turn in some other direction, they cut the soil and make caves in the bank.

Wind is the important climatic agent, who carry away the fine particles of soil and creates soil erosion. Saltation: This occurs under the influence of direct pressure of stormy wind and the soil particles of 1-3.5 mm diameter move up in vertical direction.

Suspension: Here fine soil particles (less than 1mm diameter) which are suspended on the air are kicked up and taken away to distant places.

Surface creep: Here the large particles (5-10 mm diameter) creep over the soil surface along with wind.

35% of world soil erosion is due to overgrazing.

30% of world soil erosion is due to deforestation.

3. Conservational till farming (or) no-till-farming

In tradition method, the land is ploughed and soil is broken up and leveled to make a planting surface. This disturbs the soil and makes it susceptible to erosion

However, no-till-farming causes minimum disturbance to the top soil

Here the tilling machines make slits in the unploughed soil and inject seeds, fertilizers and water in the slit. So the seed germinates and the crop grows.

It involves planting crops in rows across the contour of gently sloped land.

Each row acts as a small dam to hold soil and to slow water runoff. 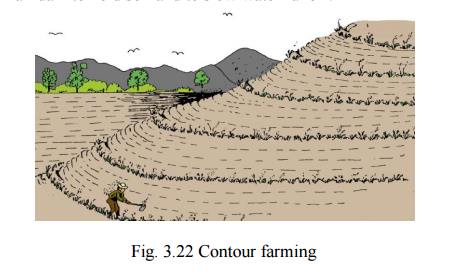 It involves conversion of steep slopes into broad terraces, which run across the contour. This retains water for crops and reduces soil erosion by controlling runoff. 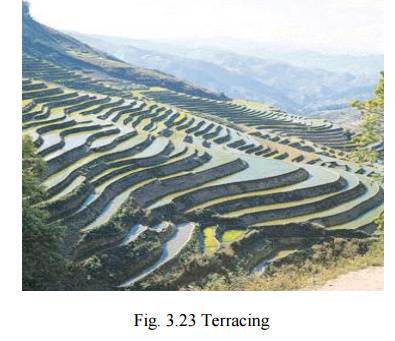 It involves planting crops in strips or alleys between rows of trees of shrubs that can provide fruits and fuel wood.

Even when the crop is harvested, the soil will not be eroded because trees and shrubs still remain on the soil and hold the soil particles. 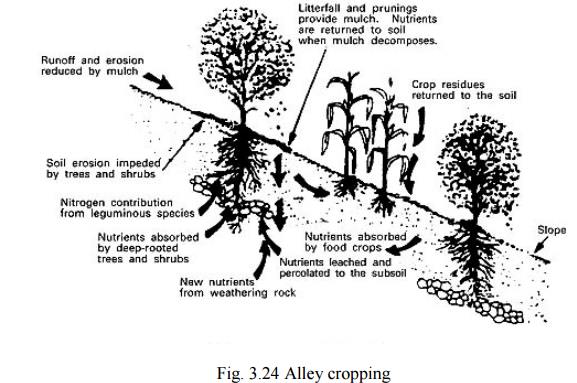 The trees are planted in long rows along the boundary of cultivated lands, which block the wind and reduce soil erosion.

Wind breaks help in retaining soil moisture, supply of some wood for fuel and provide habitats for birds. 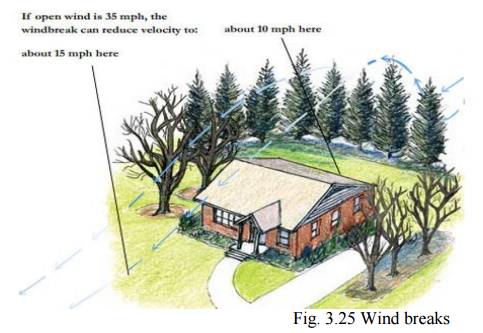