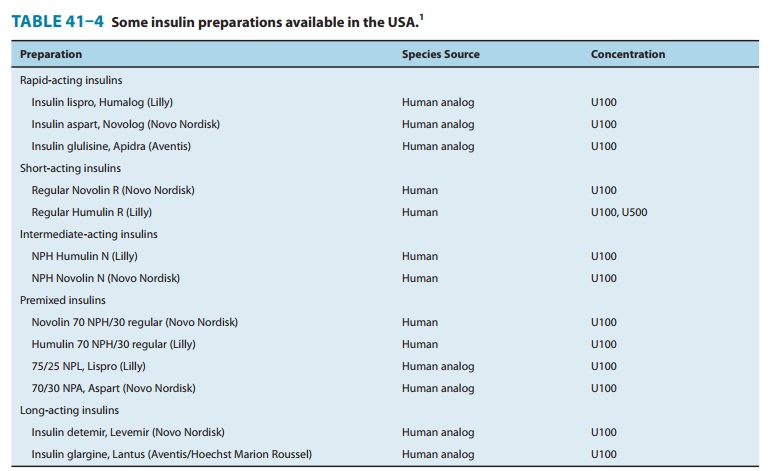 To facilitate multiple subcutaneous injections of insulin, particu-larly during intensive insulin therapy, portable pen-sized injectors have been developed. These contain cartridges of insulin and replaceable needles.

Disposable insulin pens are also available for selected formula-tions. These are regular insulin, insulin lispro, insulin aspart, insu-lin glulisine, insulin glargine, insulin detemir, and several mixtures of NPH with regular, lispro, or aspart insulin (Table 41–4). They have been well accepted by patients because they eliminate the need to carry syringes and bottles of insulin to the workplace and while traveling.

Normally, the 24-hour background basal rates are prepro-grammed and relatively constant from day to day, although tem-porarily altered rates can be superimposed to adjust for a short-term change in requirement. For example, the basal delivery rate might need to be decreased for several hours because of the increased insulin sensitivity associated with strenuous activity.

The traditional pump—which contains an insulin reservoir, the program chip, the keypad, and the display screen—is about the size of a pager. It is usually placed on a belt or in a pocket, and the insulin is infused through thin plastic tubing that is connected to the subcutaneously inserted infusion set. The abdomen is the favored site for the infusion set, although flanks and thighs are also used. The insulin reservoir, tubing, and infusion set need to be changed using sterile techniques every 2 or 3 days. Currently, only one pump does not require tubing. In this model, the pump is attached directly to the infusion set. Programming is done through a hand-held unit that communicates wirelessly with the pump. CSII delivery is regarded as the most physiologic method of insu-lin replacement.

Use of these continuous infusion devices is encouraged for people who are unable to obtain target control while on multiple injection regimens and in circumstances in which excellent glyce-mic control is desired, such as during pregnancy. Optimal use of these devices requires responsible involvement and commitment by the patient. Insulin aspart, lispro, and glulisine all are specifi-cally approved for pump use and are preferred pump insulins because their favorable pharmacokinetic attributes allow glycemic control without increasing the risk of hypoglycemia.