Glucagon is synthesized in the alpha cells of the pancreatic islets of Langerhans .

Glucagon is synthesized in the alpha cells of the pancreatic islets of Langerhans (Table 41–1). Glucagon is a peptide—identical in all mammals—consisting of a single chain of 29 amino acids, with a molecular weight of 3485. Selective proteolytic cleavage converts a large precursor molecule of approximately 18,000 MW to glu-cagon. One of the precursor intermediates consists of a 69-amino-acid peptide called glicentin, which contains the glucagon sequence interposed between peptide extensions.

Glucagon is extensively degraded in the liver and kidney as well as in plasma and at its tissue receptor sites. Because of its rapid inactivation by plasma, chilling of the collecting tubes and addition of inhibitors of proteolytic enzymes are necessary when samples of blood are collected for immunoassay of circulating glucagon. Its half-life in plasma is between 3 and 6 minutes, which is similar to that of insulin. 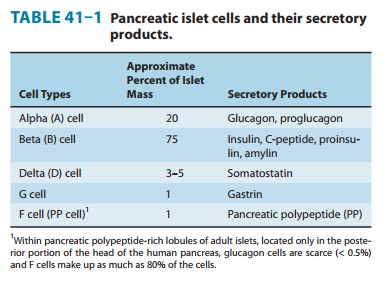 Glicentin immunoreactivity has been found in cells of the small intestine as well as in pancreatic alpha cells and in effluents of perfused pancreas. The intestinal cells secrete enteroglucagon, a family of glucagon-like peptides, of which glicentin is a member, along with glucagon-like peptides 1 and 2 (GLP-1 and GLP-2). Unlike the pancreatic alpha cell, these intestinal cells lack the enzymes to convert glucagon precursors to true glucagon by removing the carboxyl terminal extension from the molecule.

The function of the enteroglucagons has not been clarified, although smaller peptides can bind hepatic glucagon receptors where they exert partial activity. A derivative of the 37-amino-acid form of GLP-1 that lacks the first six amino acids (GLP-1[7–37]) is a potent stimulant of insulin synthesis and release and beta-cell mass. In addition, it inhibits glucagon secretion, slows gastric emptying, and has an anorectic effect. After oral glucose ingestion, GLP-1 along with another gut hormone, GIP, accounts for as much as 70% of the induced insulin secretion. GLP-1 represents the predominant form of GLP in the human intestine and has been termed insulinotropin. It has been considered as a potential therapeutic agent in type 2 diabetes. However, GLP-1 requires continuous subcutaneous infusion to produce a sustained lower-ing of both fasting and postprandial hyperglycemia in type 2 dia-betic patients; therefore, its clinical usefulness is limited. Exenatide and liraglutide (see previous text) are GLP-1 receptor agonist ana-logs with more practical half-lives.

The first six amino acids at the amino terminal of the glucagon molecule bind to specific Gs protein-coupled receptors on livercells. This leads to an increase in cAMP, which facilitates catabo-lism of stored glycogen and increases gluconeogenesis and keto-genesis. The immediate pharmacologic result of glucagon infusion is to raise blood glucose at the expense of stored hepatic glycogen. There is no effect on skeletal muscle glycogen, presumably because of the lack of glucagon receptors on skeletal muscle. Pharmacologic amounts of glucagon cause release of insulin from normal pancre-atic beta cells, catecholamines from pheochromocytoma, and cal-citonin from medullary carcinoma cells.

Glucagon has a potent inotropic and chronotropic effect on the heart, mediated by the cAMP mechanism described above. Thus, it produces an effect very similar to that of β-adrenoceptor ago-nists without requiring functioning β receptors.

Large doses of glucagon produce profound relaxation of the intes-tine. In contrast to the above effects of the peptide, this action on the intestine may be due to mechanisms other than adenylyl cyclase activation.

The major use of glucagon is for emergency treatment of severe hypoglycemic reactions in patients with type 1 diabetes when unconsciousness precludes oral feedings and intravenous glucose treatment is not possible. Recombinant glucagon is currently available in 1-mg vials for parenteral use (Glucagon Emergency Kit). Nasal sprays have been developed for this purpose but have not yet received FDA approval.

Glucagon is sometimes useful for reversing the cardiac effects of an overdose of β-blocking agents because of its ability to increase cAMP production in the heart. However, it is not clinically useful in the treatment of cardiac failure.

D. Radiology of the Bowel

Glucagon has been used extensively in radiology as an aid to X-ray visualization of the bowel because of its ability to relax the intestine.

Transient nausea and occasional vomiting can result from gluca-gon administration. These are generally mild, and glucagon is relatively free of severe adverse reactions. It should not be used in a patient with pheochromocytoma.