Genes occur as paired alleles. Each corresponding allele is carried by one of a pair of homologous chromosomes.

Genes occur as paired alleles. Each corresponding allele is carried by one of a pair of homologous chromosomes. If the two alleles are identical, the individual ishomozygous for that gene and, if they differ, the individual is said to be heterozygous. In the heterozygous state, one allele may be dominant overthe other which is therefore recessive. In this situation, only the characteristic encoded by the dominant trait will be expressed, as would also be the case if the individual was homozygous for both dominant alleles. The recessive trait will only become apparent in a homozygous recessive individual. 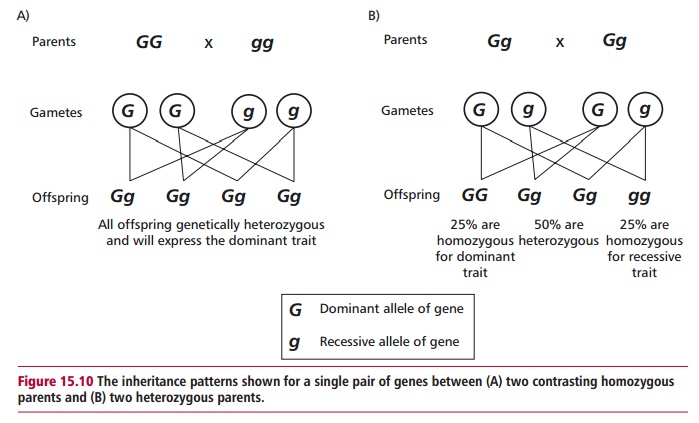 Mutations are changes that occur in the genome and can give rise to clinical disorders (Margin Note 15.2). Mutations include changes within single genes and changes to whole chromosomes. They may be simple substitutions of one nucleotide for another (point mutations), involve the insertion or deletion of one or more nucleotides within the normal sequence of DNA within a chromosome or even alter the structures of individual chromosomes or the number of chromosomes present. When considering the effects of mutations, it is important to distinguish between a genetic change which occurs in somatic cells and one occurring in gametes. Mutations arising in somatic cells will not be transmitted to future generations although they may represent the first step in the development of cancer . In somatic cells, mutations that produce a recessive autosomal allele are unlikely to have clinical consequences because their expression is masked by the corresponding dominant allele. However, somatic mutations that are dominant or X-linked (see below) can have a greater impact because they are likely to be expressed. Similarly, their impact is greater if they arise early in development before undifferentiated cells give rise to differentiated tissues or organs. In adult tissues, the activities of many nonmutant cells often mask mutations in a few other cells. Mutations in gametes or gamete forming tissues are part of the germ line and are of greater clinical concern because as well as affecting that individual, they will also be transmitted to offspring. 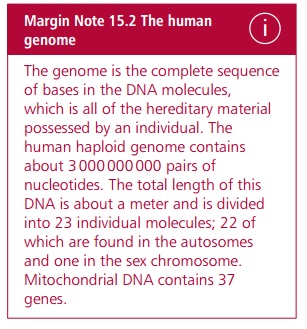 Dominant autosomal mutations M will be expressed phenotypically in both the homozygous and heterozygous condition. However, if the mutation is recessive (m) then it is not likely to affect an individual unless both chromosomes carry the same mutation. The inheritance patterns shown by dominant/recessive alleles that are associated with a clinical condition follow the Mendelian rules explained above. If only a single member of a homologous pair of chromosomes carries the mutation, it can, however, be passed on to the next generation and the parent is described as a carrier (Figure 15.11 (A) and (B)). If one parent is homozygous for the normal gene (MM) and the other parent heterozygous for the mutated allele (Mm) then 50% of the offspring will be homozygous for the normal gene (MM) and the other 50% heterozygous (Mm) and carriers. None of the children will be affected. If both parents are heterozygotes (Mm) then 25% of offspring will be dominant homozygotes (MM), 50% of offspring will be heterozygotes and carriers (Mm) but the remaining 25% will be recessive homozygotes (mm) and express the condition (Figure 15.11 (B)). 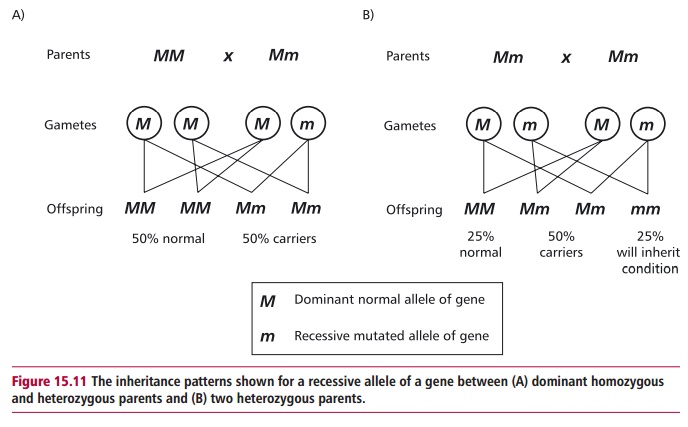 Heterozygosity means that autosomal recessive mutations, even one resulting in a lethal allele, may go unnoticed and be maintained in the population for many generations, until the resultant allele has become widespread in the population. The new allele will become evident only when a chance mating brings two copies of it together in the homozygous condition.

A number of genetic diseases are caused by defective alleles of genes of the sex (X and Y) chromosomes. The X chromosome contains many more genes than the Y, although they do have some genes in common, thus any defective (mutated) gene on the X chromosome is likely to be expressed in males (XY) but be masked in females (XX). Genetic diseases associated with the X chromosome are commonest and they are often referred to as X- or sex-linked genetic conditions. X-linked diseases can be recessive or dominant, although the former, for example hemophilia described, are the better known (Table 15.1). Given that females have two X chromosomes but males only one together with a Y chromosome, then the expression of sex-linked genes differs between females and males because many genes on the Y chromosome lack a corresponding allele on the X chromosome. Thus X-linked recessive genes are only expressed in females if there are two copies of the gene; one on each of the X chromosomes. However, for males,

there only needs to be one copy of a defective (mutated) X-linked recessive gene for the disorder to be expressed. For example, if a woman carried a mutated recessive gene on one of the X chromosomes (Figure 15.12) then statistically, 50% of her sons would inherit the defective gene and show the disorder; however, 50% of her sons would not receive the gene and would not express the condition. Similarly, half of her daughters would not receive the gene and therefore would be unable to pass it to future generations. The other half would receive the defective gene and be able to transmit it to the next generation. Like their mother, they are asymptomatic carriers of the disorder.

A common recessive X-linked condition only expressed in males is red– green color blindness. This is an inability to distinguish between red and green colors although visual acuity (keenness of vision) is normal. It is not associated with any serious complications but affected individuals may not be considered for some occupations that involve transport or the armed forces, where the ability to distinguish colors is essential. The defective gene is located on the X chromosome and males are 16 times more likely to be affected than females. Its prevalence in males is about 10%.