Aneuploidy is usually caused by the nondisjunction of paired chromosomes at meiosis I or of sister chromatids at meiosis II or by delayed movement of a chromosome at anaphase. 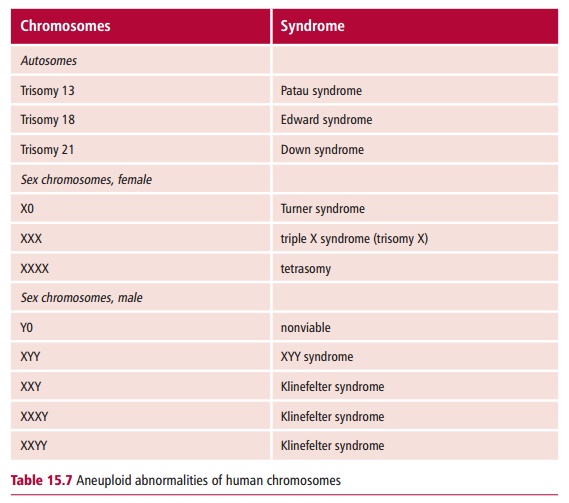 Aneuploidy is usually caused by the nondisjunction of paired chromosomes at meiosis I or of sister chromatids at meiosis II or by delayed movement of a chromosome at anaphase. Nondisjunction is caused by the failure of pairs of homologues to separate or disjoin during segregation. Figure 15.31 (A) and (B)illustrates the consequences of nondisjunction during first meiosis and second meiosis for a single chromosome. Thus gametes are formed that either lack the chromosome or contain two copies of it. If these are fertilized by a normal haploid gamete, then zygotes are produced with one or three chromosomes. Thus nondisjunction can lead to a variety of aneuploid conditions. 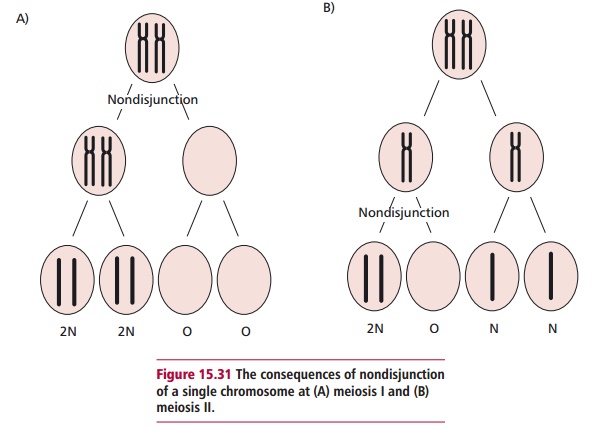 Monosomy results in two types of haploid gametes, N and N – 1. Also, the single unpaired chromosome in the 2N – 1 cell is easily lost during meiosis resulting in the formation of two gametes with N – 1 chromosomes. Other types of aneuploidy also have serious, often lethal consequences in humans. Approximately 90% of all chromosomal aberrations lead to a termination of pregnancy in a spontaneous abortion.

Autosomal monosomy is rare since monosomic embryos do not develop significantly and are usually lost early in pregnancy although the abnormalities can be detected in aborted fetuses. The extra chromosome in trisomy produces individuals who are likely to have more chance of being viable provided that the chromosome involved is relatively small. The addition of a large autosomal chromosome has severe effects and is usually lethal during development. Autosomal trisomies are found in about half of the chromosomal abnormalities that lead to fetal death.

Trisomy-13 (47,13+) produces Patau syndrome (Figure 15.32 (A)) and affects about one in 5000 live births. The syndrome is characterized by many abnormalities including mental and physical retardation, cardiac anomalies, polydactyly, that is extra fingers or toes, cleft lip and palate and small eyes.Most such babies die before they are three months old. 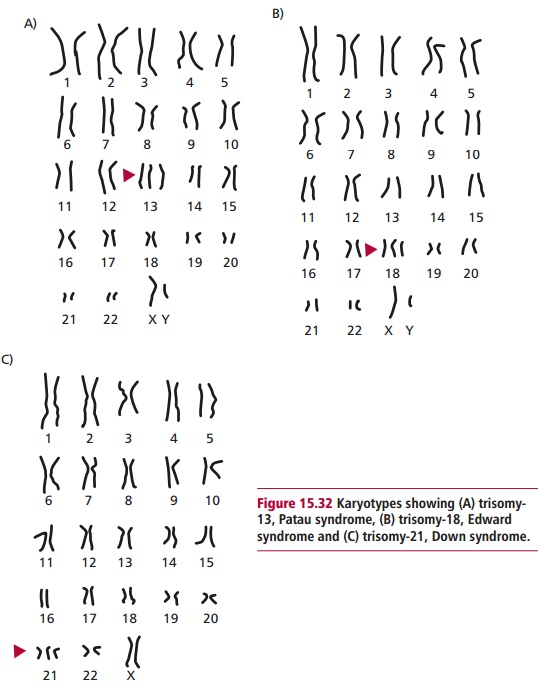 Trisomy-18 (47,18+) is associated with Edwards syndrome (Figure 15.32 (B)) and occurs in about one in 4000 live births. About 80% of cases of Edwards syndrome are female. Sufferers are small at birth and have multiple congenital malformations that affect almost all body systems. Among the many abnormalities associated with the syndrome are mental and developmental retardation, elongated skull, low-set malformed ears and clenched fists. Ninety percent of infants with trisomy-18 die within six months, often from cardiac problems.

Trisomy-21 (Figure 15.32 (C)) leads to Down syndrome, the only human autosomal trisomy in which significant numbers of individuals survive more than a year following birth. It was named after its ‘discoverer’, a doctor called (Langdon) Down (1828–1896), in 1866. Affected individuals have common physical features and affectionate, loving natures. They generally have flat faces with epicanthic folds over the eyes, round heads with a protruding furrowed tongue that causes the mouth to remain partially open. They are below average height and have short, broad hands. Their physical and mental development is retarded and muscle tone and motor skills are poor. Down patients are prone to respiratory disease, 50% of them have heart problems and their incidence of leukemia is approximately 15 times higher than that of the normal population. Not surprisingly, life expectancy is reduced and few survive to 50 years of age. Many die of Alzheimer’s disease .

Down syndrome affects, on average, one in every 700 live births. However, the incidence increases with the age of the mother but not that of the father. Figure15.33illustrates the relationship between the incidence of Down syndromeand maternal age, although in terms of gross numbers, most affected children are born to women under 35 years old since the majority of pregnancies occur below this age. 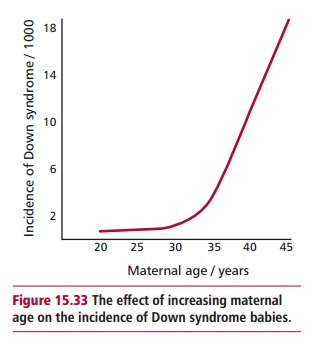 The relationship between the age of the mother and the incidence of Down syndrome is explainable in terms of the production of oocytes . Females have a full complement of primary oocytes that developed in the ovary of the developing female fetus. These oocytes have commenced meiosis but are arrested at the prophase I before birth. In an adult fertile female, the nucleus of a secondary oocyte begins the second meiotic division at each monthly ovulation but progresses only to metaphase II, when division again

stops. The second meiotic division is not completed unless a sperm penetrates the secondary oocyte. Thus the succeeding ovum has been arrested in meiosis for about a month longer than the preceding one. Thus older ovulating women produce ova that are significantly older and have been arrested in meiosis longer than those of younger women. It is possible that the probability of nondisjunction increases with the length of time the primary oocyte spends in the ovary but whether ovum age is the specific cause of the increased nondisjunction leading to Down syndrome is not yet known. 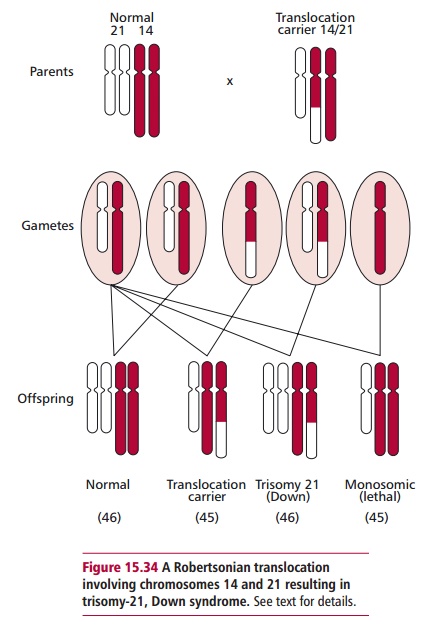 Some individuals with Down syndrome must be institutionalized but most can be cared for at home and benefit greatly from special education programs. Advances in several areas of medical treatment have resulted in a greater life expectancy for modern day Down syndrome children.

Aneuploidy involving sex chromosomes gives rise to a number of well defined syndromes. These include Turner, Klinefelter and XYY syndromes. A female born with a single X chromosome (45X0) shows Turner syndrome (Table 15.7). The incidence is one per 5000 female births although the vast majority of 45X0 aneuploids are spontaneously aborted. The condition may arise from nondisjunction in either parent but in 75% of cases of Turner syndrome only the maternal X chromosome is present, implying that the problem originates in spermatogenesis in the father. Females with Turner syndrome are short in stature and rarely undergo secondary sexual development and so are mostly infertile, although their intelligence and life span are normal. A male born with one or more extra X chromosomes (Table 15.7) exhibits Klinefelter syndrome. The incidence of 47XXY is one for every 1000 boys born although the risk increases with an increase in the age of the mother. The extra chromosome is donated from the mother in 60% and from the father in 40% of cases and arises by nondisjunction during both maternal and paternal meiotic division. Affected males have underdeveloped testes and are infertile, are often above average height and have mild mental retardation. Approximately one in 1000 male children exhibit XYY syndrome, which arises from a nondisjunction of the Y chromosome. Males with XYY syndrome are above average in height and may be less fertile.