Genetics, from the Greekgennomeaning ‘to give birth’, is that branch of biologyconcerned with heredity, genes and DNA (Figure 15.3), the genetic material.

Genetics, from the Greekgennomeaning ‘to give birth’, is that branch of biologyconcerned with heredity, genes and DNA (Figure 15.3), the genetic material. It is also the scientific study of the variations in inherited characteristics, often called traits, and how these are transmitted from one generation to the next. Inherited characteristics include a number of clinical conditions and diseases that are described, for example sickle-cell anemia and hemophilia , the muscular dystrophies and cystic fibrosis . Others, such as phenylketonuria and Down syndrome, will be described. Genomics is the study of the full complement of bases in the DNA of an organism. 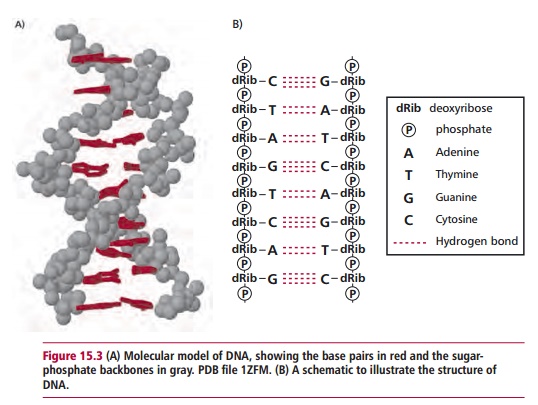 Genes are the stretches of bases in DNA that carry the code for making RNA or proteins. The code is contained in sequences of the four nucleotide bases, adenine, cytosine, guanine and thymine (A, C, G and T, respectively). DNA normally occurs as the famous double helical molecule (Figure 15.3 (A)) that consists of two long polymers of alternating phosphates anddeoxyribose sugars, linked together by hydrogen bonds between pairs of complementary bases across the center of the double helix, rather like the steps of a spiral staircase. Adenine always pairs with T and C always pairs with G (Figure 15.3 (B)).

For a gene to be expressed, the nucleotide base code in a gene in the DNA must be copied or transcribed to form an RNA molecule. The strands of the double helical DNA separate and one of them, ‘the gene’, acts as a template for the synthesis of a complementary new strand (Figure 15.4 (A)). However, the new strand is an RNA molecule not DNA. The base pairing rules are similar to the complementary base pairing in DNA but uridine (U) is used in RNA, not T and the sugar ribose, not deoxyribose. A number of RNA molecules may be transcribed from one gene. In some cases, the formation of an RNA molecule is the major event in gene expression. However, in the vast majority of cases, the expression of a gene results in the formation of a protein (Figure 15.4 (B)). In these cases, the RNA formed by transcription is a messenger RNA or mRNA molecule. However, DNA is transcribed in the nucleus but the synthesis of proteins takes place in the cytosol. Thus the mRNA molecules are transported out of the nucleus and go to the ribosomes in the cytosol where their message is translated into a linear sequence of amino acids to make a protein. Each sequence of three bases in the mRNA codes for the addition of one specific amino acid to the growing polypeptide chain of the protein; for example AUG codes for the amino acid methionine, UUU codes for phenylalanine and so on. Each mRNA molecule may be translated numerous times so that many molecules of protein are produced.