When human cells are grown in culture, some of the chromosomes in cells derived from certain individuals fail to stain in particular regions, giving the appearance of a gap.

When human cells are grown in culture, some of the chromosomes in cells derived from certain individuals fail to stain in particular regions, giving the appearance of a gap. These sites are known as fragile sites, since they are susceptible to breakage when the cells are cultured in the absence of certain chemicals such as folic acid, which is normally present in the culture medium. More than 80 such sites have been identified since they were first discovered in 1965. The cause of the fragility at these sites is not known with certainty but they may represent regions where the DNA has been incompletely replicated. 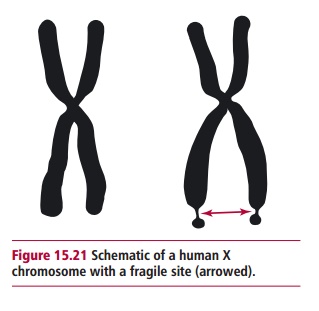 Almost all studies on fragile sites have been carried out in vitro on cells halted in mitosis. Initially they were not considered to be clinically relevant and, indeed, most fragile sites do not appear to be associated with any clinical syndrome. However, a strong association has been shown to exist between a form of mental retardation called fragile X or Martin-Bell syndrome and a fragile site on the X chromosome at position Xq27.3 (Figure 15.21) associated with the FMR1 gene. It is a dominant trait but fortunately fails to be fully expressed (incomplete penetrance) in many individuals. However, it is the commonest cause of mental retardation and has been estimated to affect one in about 4100 males in the UK. Most suffer mental retardation to the point that they are unable to live an independent life, and have a distinct physical appearance, including long, narrow faces with protruding chins, enlarged ears, and increased testicular size particularly after puberty. The syndrome also affects about one in 8000 females, who tend to suffer milder forms of retardation. Most humans carry a stable version of FMR1 which has about 30 CGG repeats. Individuals who have genes with about 45 to about 55 CGG repeats are in a gray zone; they do not have fragile X syndrome and, while they are likely to pass on a stable gene to their children, they have an increased chance of having children with a larger number of CGG repeats. People with about 55 to about 200 are said to have a premutation since although they generally have few or lack symptoms of fragile X syndrome, they can have children with more than 200 CGG repeats. This is the full mutation that initiates inappropriate methylation of cytosine bases and unfortunately can lead to the full blown syndrome.

The FMR1 gene is carried on the X chromosome and shows Mendelian patterns of inheritance for X-linked disorders (Figure 15.12), although if it reaches the premutation stage it has a high probability of mutating (by repeat amplification) from one generation to the next. However, amplification of the CGG repeats can only occur in females, not males. Thus although there may be no family history of fragile X syndrome, it can suddenly appear in a number of offspring. The patterns of inheritance of fragile X syndrome are also somewhat complicated compared with a disorder like phenylketonuria, described. Given that FMR1 is on the X chromosome, a father cannot pass on any form of it to male offspring. However, daughters generally receive the paternal type. For example, almost all males with the stable version generally have daughters with the stable version. However, males with premutations, who are generally phenotypically normal and called normal transmitting males, have premutation type daughters. This inheritance can have severe consequences for any male grandchild as explained below. Most full mutation males do not have children. Those few who do would give the full mutated version to their daughters but surprisingly the daughters only express the premutation. Hence the father is passing on a reduced number of CGG repeats presumably because there are protected cells in the testes that never expand to the full mutation or a reduction in the repeat number occurs in some male reproductive cells. This means that all females who do have the full mutation must have received it from their mothers since they cannot receive it from their fathers.

All males with the full mutation will experience significant symptoms. Some females with the full mutation will have symptoms of fragile X but, in general, the severity is less. Finally, there are individuals who cannot be assigned to these categories but have cells that vary regarding repeat size or the extent of methylation. The severity of their symptoms depends on the proportion of cells affected and the tissues involved.

The phenomenon of trinucleotide repeats is seen in several other human disorders. For example, a fragile site on chromosome 3 containing the gene FHIT (fragile histidine triad) is often altered in cells from tumors of patientswith lung cancer . Huntington disease, myotonic dystrophy and spinobulbar muscular atrophy or Kennedy disease are also associated with trinucleotide amplifications, although they differ from fragile X syndrome in that the amplification can occur in both sexes at each generation and is not associated with chromosome fragility. However, they are similar in that a threshold number of triplet repeats must be exceeded before symptoms of the disease appear.