DNA Replication and the Cell Cycle

When a cell divides the genetic information must be passed on to the two daughter cells.

DNA REPLICATION AND THE CELL CYCLE

When a cell divides the genetic information must be passed on to the two daughter cells. The series of biochemical and morphological events that occur in a population of reproducing cells is called the cell cycle. This results in the replication of the genetic material (DNA molecules) and division of the cell into two daughter cells. The replication of DNA involves separating the two DNA strands of the double helix and aligning new bases according to the usual pairing rules; A with T and G with C. The new nucleotides are linked together to form two new strands, each of which is complementary to one of the original (parental) strands. This action forms two new double-stranded DNA molecules, each of which consists of one parental strand and one daughter strand (Figure 15.5) and, for this reason, is often called semiconservative replication. This is a very simplified account of an extremely complex process, which is catalyzed by a range of enzymes. This replication is very accurate; it needs to be because the genetic instructions must be retained from generation to generation. Most of the few errors that inevitably occur are corrected by error-detecting enzyme systems in the cell. 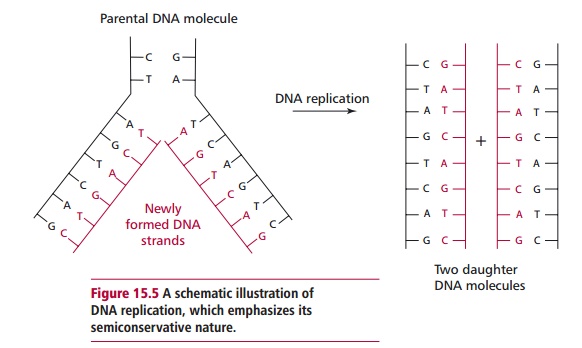 The cell cycle is an orderly sequence of events consisting of interphase, the period between cell divisions, and mitosis (or meiosis if gamete producing cells are concerned) when the cell divides. Thus interphase, which lasts about 24 h, prepares the cell for division by building up large energy stores and synthesizing new organelles for the daughter cells; a high metabolic rate is typical of cells about to undergo division. The cell cycle can be divided into four main, but continuous, phases that are often drawn as a circle (Figure15.6). The phases are called G1, S, G2and M. The G1(for gap) phase lasts about8 h during which the cell makes a commitment to divide. It is characterized by the synthesis of RNA and protein. In the S phase, S for synthesis, the DNA is replicated in a process lasting approximately 6 h. The G2 phase is a relatively quiescent period, which typically lasts 4 h, during which organelles are replicated. Mitosis (or meiosis) occurs in the M phase. Following mitosis, the cells enter interphase, which lasts until the S phase of the next cycle. Cells that divide only rarely, for example neurons, are said to be in a stage called the G0 phase. It is only when they become committed to divide that they are described as being in the G1 phase of the cycle. Two different types of cell division are recognized, mitosis and meiosis. 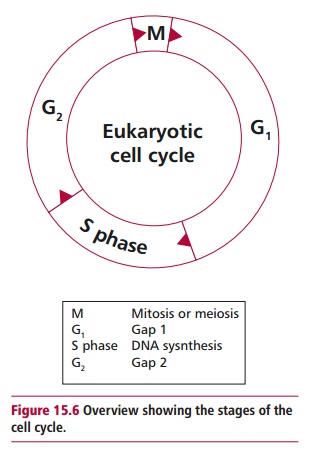 Mitosis is the type of division that occurs during growth and the renewal oftissues. The daughter cells produced have the same diploid complement of chromosomes as the parental cell. Mitosis is a continuous process that lasts about 1 h. For convenience it is divided into four stages; prophase, metaphase, anaphase and telophase (Figure 15.7). In interphase the chromosomes occur as dispersed, thread-like material called chromatin, which cannot be seen with a light microscope. In prophase the chromosomes begin to condense to form distinct chromosomes that are visible with microscopy. Since their DNA has been replicated, each chromosome is present as an identical pair of chromosomes, although at this stage each member of the pair is referred to as a sister chromatid, which are joined together by centromeres. The centrioles, normally located just outside the nuclear envelope,undergo replication and migrate to opposite poles of the cell. This leads to the microtubules of the cytoskeleton rearranging to form the spindle, which spans the cell from one end to the other. The ends of the spindle are known as poles whereas its middle region is called an equator. During prophase, the cell’s nucleolus disappears and prophase concludes with dissipation of the nuclear envelope. In metaphase, the chromosomes migrate to the center of the cell and are arranged around the equator of the spindle, where the centromere of each chromosome (paired chromatids) becomes attached to spindle fibers. The chromatids are drawn apart at the centromere region towards opposite 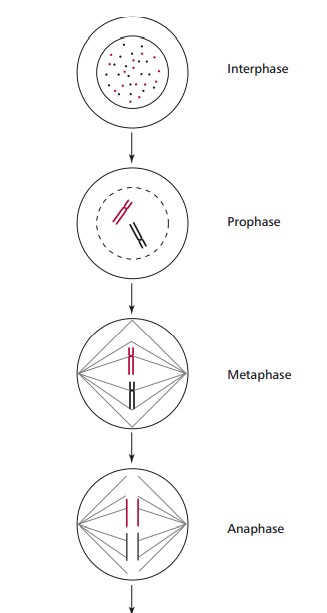 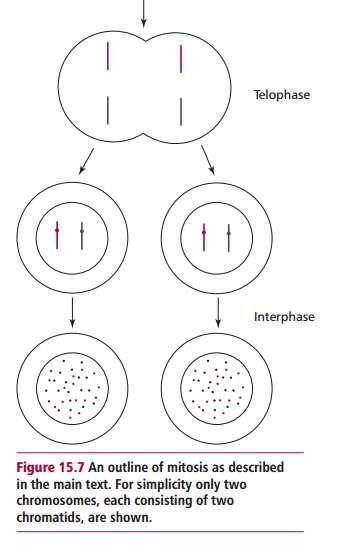 poles of the spindle. During anaphase, the chromatids of each chromosome are pulled apart and each chromatid moves towards the poles of the spindles reaching the ends by telophase. In telophase, the cell undergoes division to two daughter cells by the plasma membrane constricting and cutting across the spindle equator. The spindle breaks down and nuclear envelopes form around each separated grouped of chromatids, now called chromosomes. The nucleoli also become apparent in the new nuclei and the chromosomes return to the nonvisible forms typical of cells in interphase. Hence the parental cell has divided to form two daughter cells that are genetically identical to the parent. 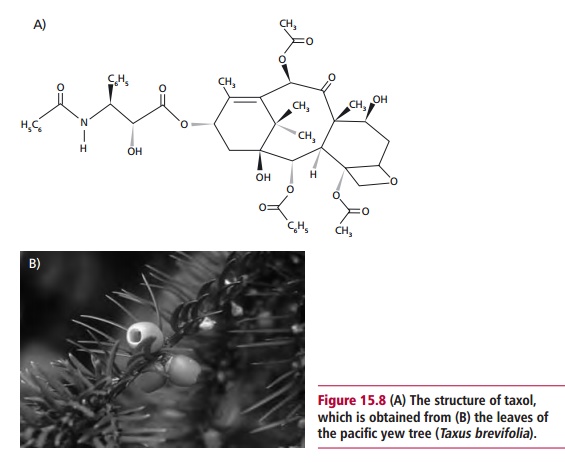 Meiosis may be thought of as consisting of two separate divisions (Figure15.9). In the first meiotic division (prophase I through to telophase I) theparent cell divides into two cells each of which receives one of each pair of homologous chromosomes. Each of these chromosomes consists of two chromatids. The second meiotic division (prophase II through to telophase II) results in each chromosome being separated into chromatids, with the result that four daughter cells each with a haploid chromosome complement are formed. In prophase I, the chromosomes contract and the nucleolus shrinks in size. Homologous chromosomes lie side by side in pairs, a situation called synapsis. Each member of the pair is bivalent. It is at this stage that genetic recombination or crossing over occurs. While they are paired, the nonsister chromatids, that is one maternal and one paternal chromatid, of a homologous pair are broken at equivalent positions and exchange homologous pieces of material (Figure 15.9). The crossed strands of the chromatids formed during recombination are called chiasmata (singular chiasma). Recombination results in each chromatid acquiring genes or parts of genes from the other and the process leads to the formation of new combinations of genes or parts of genes in chromosomes. Eventually recombinant gametes are formed that differ from their paternal cells in their gene content. Thus crossing over promotes genetic variation. 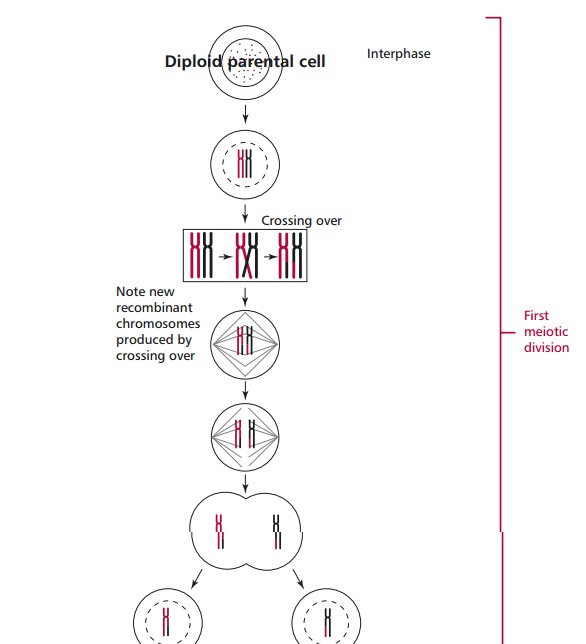 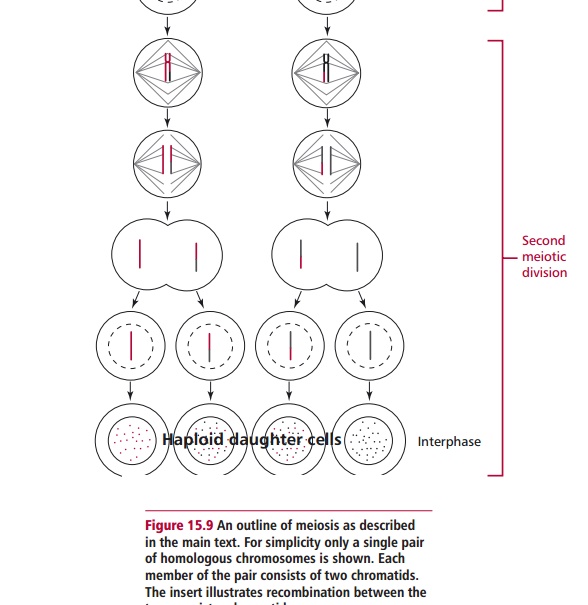 Failure of chromosomes to separate at metaphase in mitosis or either of the metaphases in meiosis is called nondisjunction. Nondisjunction can have serious clinical consequences as explained.