The threshold voltage VT for a MOS transistor can be defined as the voltage between the gate and the source terminals below which the drain to source current effectively drops to zero.

The threshold voltage VT is not a constant with respect to the voltage difference between the substrate and the source of the MOS transistor. This effect is called the body effect or substrate bias effect.

3. Give the different modes of operation of MOS transistor

4.   What are the different regions of operation of a MOS transistor?

a. Cut off region

It is also called weak inversion region where the drain current is dependent on the gate and the drain voltage w. r. to the substrate.

Channel is strongly inverted and the drain current flow is ideally independent of the drain-source voltage (strong-inversion region).

5. Give the expressions for drain current for different modes of operation of

6. Plot the current-voltage characteristics of a nMOS transistor. 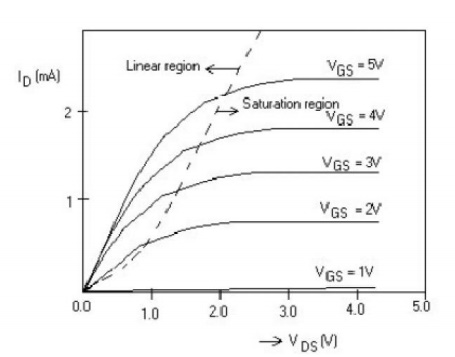 8. What are the secondary effects of MOS transistor?

9. What is CMOS latchup? How it can be prevented?

The MOS technology contains a number of intrinsic bipolar transistors.These are especially troublesome in CMOS processes, where the combination of wells and subtrates results in the formation of p-n-p-n structures. Triggering these thyristor like devices leads to a shorting of VDD & VSS lines, usually resulting in a destruction of the chip.

10.The remedies for the latch-up problem include:

(i)       an increase in substrate doping levels with a consequent drop in the value of Rpsubs.

(ii)    reducing Rnwell by control of fabrication parameters and ensuring a low contact resistance to VDD.

11.   What are the different fabrication processes available to CMOS technology?

12.   What is intrinsic and extrinsic semiconductor?

13. What are the steps involved in manufacturing of IC?

15.   what are the process involved in photo lithography?

these are important process involved in photolithography.

16. what is the purpose of masking in fabrication of IC?

Masking is used to identify the place in which Ion Implantion should not be occurred.

17. what are the materials used for masking?

18.what are the types of etching ?

Wet etching and dry etching are the types of photo etching.

19. what is diffusion process ? what are doping impurities?

Diffusion is a process in which impurities are diffused in to the silicon chip at 10000C temperature. B2O3 and P2O5 are used as impurities.

It is a process used to provide electrical isolation between different components and interconnections.

21. what are the various CMOS technologies?

22. what is channel stop implantation?

In n-well fabrication, n-well is protected with resist material. Because, it should not be affected by Boron implantation. The boron is implanexcept n-well. It is done using photoresist mask. This type of implantation is known as channel implantation.

LOCOS means Local Oxidation Of Silicon. This is one type of oxide construction.

LDD means Light Doped Drain Structures. It is used for implantation of n- in n-well process.

26. what is twin-tub process? Why it is called so?