Included are the modelling of process steps (such as diffusion and ion implantation), and modelling of the behavior of the electrical devices based on fundamental physics, such as the doping profiles of the devices.

TCAD may also include the creation of compact models (such as the well known SPICE transistor models), which try to capture the electrical behavior of such devices but do not generally derive them from the underlying physics. (However, the SPICE simulator itself is usually considered as part of ECAD rather than TCAD.)

Today the requirements for and use of TCAD cross-cut a very broad landscape of design automation issues, including many fundamental physical limits.

At the core are still a host of process and device modeling challenges that support intrinsic device scaling and parasitic extraction.

These applications include technology and design rule development, extraction of compact models and more generally design for manufacturability (DFM).

The dominance of interconnects for giga-scale integration (transistor counts in O (billion)) and clocking frequencies in O (10 gigahertz)) have mandated the development of tools and methodologies that embrace patterning by electro-magnetic simulations both for optical patterns and electronic and optical interconnect performance modeling as well as circuit-level modeling.

This broad range of issues at the device and interconnect levels, including links to underlying patterning and processing technologies, is summarized in Figure and provides a conceptual framework for the discussion that now follows. 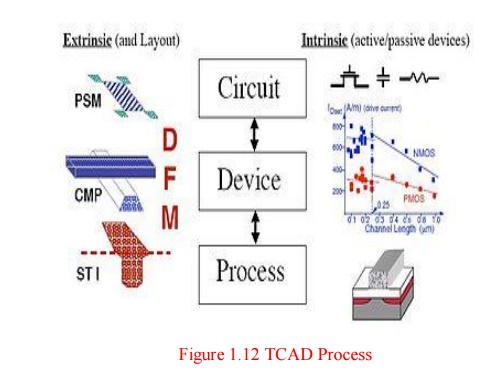 Figure depicts a hierarchy of process, device and circuit levels of simulation tools. On each side of the boxes indicating modeling level are icons that schematically depict representative applications for TCAD.

The left side gives emphasis to Design For Manufacturing (DFM) issues such as: shallow-trench isolation (STI), extra features required for phase-shift masking (PSM) and challenges for multi-level interconnects that include processing issues of chemical-mechanical planarization (CMP), and the need to consider electro-magnetic effects using electromagnetic field solvers.

The right side icons show the more traditional hierarchy of expected TCAD results and applications: complete process simulations of the intrinsic devices, predictions of drive current scaling and extraction of technology files for the complete set of devices and parasitics.

Figure again looks at TCAD capabilities but this time more in the context of design flow information and how this relates to the physical layers and modeling of the electronic design automation (EDA) world.

Here the simulation levels of process and device modeling are considered as integral capabilities (within TCAD) that together provide the "mapping" from mask-level information to the functional capabilities needed at the EDA level such as compact models ("technology files") and even higher-level behavioral models.

Also shown is the extraction and electrical rule checking (ERC); this indicates that many of the details that to date have been embedded in analytical formulations, may in fact also be linked to the deeper TCAD level in order to support the growing complexity of technology scaling.