CMOS provides an inherently low power static circuit technology that has the capability of providing a lower-delay product than comparable design-rule nMOS or pMOS technologies. The four dominant CMOS technologies are:

A common approach to p-well CMOS fabrication is to start with moderately doped n-type substrate (wafer), create the p-type well for the n-channel devices, and build the p-channel transistor in the native n-substrate. The processing steps are,

1.        The first mask defines the p-well (p-tub) n-channel transistors (Fig. 1.4a) will be fabricated in this well. Field oxide (FOX) is etched away to allow a deep diffusion.

2.        The next mask is called the “thin oxide” or “thinox” mask (Fig. 1.4b), as it defines where areas of thin oxide are needed to implement transistor gates and allow implantation to form p- or n-type diffusions for transistor source/drain regions.

The field oxide areas are etched to the silicon surface and then the thin oxide areas is grown on these areas. O ther terms for this mask include active area, island, and mesa.

3.        Polysilicon gate definition is then completed. This involves covering the surface with polysilicon (Fig 1.4c) and then etching the required pattern (in this case an inverted “U”). “Poly” gate regions lead to “self-aligned” source-drain regions.

5. The next step usually uses the complement of the p-plus mask, although an extra mask is normally not needed. The “absence” of a p-plus region over a thin-oxide area indicates that the area will be an n+  diffusion or  n-thinox.  n-thinox  in the p-well defines possible n transistors and wires. An n+ diffusion (Fig. 1.4e) in the n-substrate allows an ohmic contact to be made. Following this step, the surface of the chip is covered with a layer of Sio2.

6.        Contacts cuts are then defined. This involves etching any Sio2 down to the contacted surface, these allow metal (Fig. 1.4f) to contact diffusion regions or polysilicon regions.

8.        As a final step, the wafer is passivated and openings to the bond pads are etched to allow for wire bonding. Passivation protects the silicon surface against the ingress of contaminants. 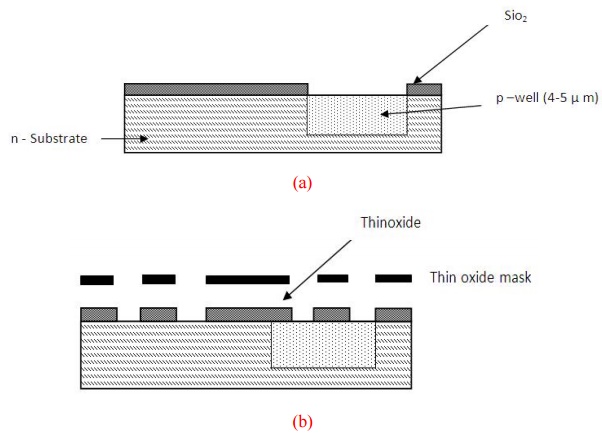 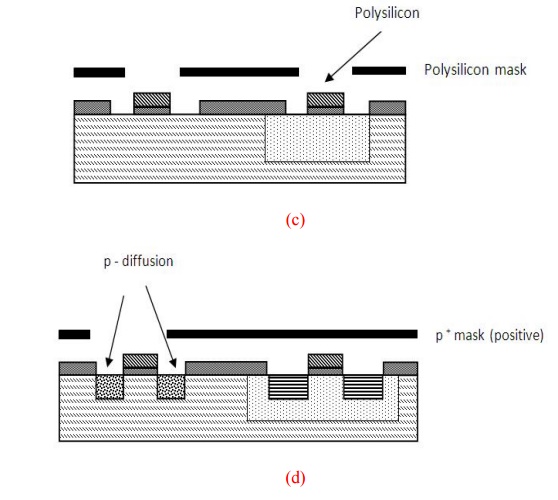 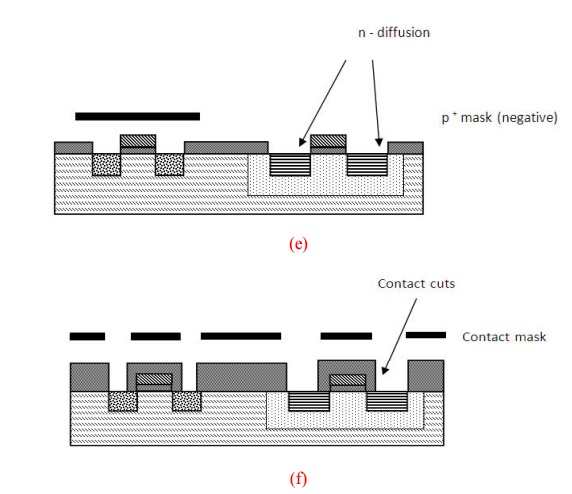 Basically the structure consists of an n-type substrate in which p-devices may be formed by suitable masking and diffusion and, in order to accommodate n-type devices, a deep p-well is diffused into the n-type substrate.

This diffusion must be carried out with special care since the p-well doping concentration and depth will affect the threshold voltages as well as the breakdown voltages of the n-transistors.

However, deep wells require larger spacing between the n- and p-type transistors and wires because of lateral diffusion resulting in larger chip areas.

High resistivity can accentuate latch-up problems. In order to achieve narrow threshold voltage tolerances in a typical p-well process, the well concentration is made about one order of magnitude higher than the substrate doping density, thereby causing the body effect for n-channel devices to be higher than for p-channel transistors.

In addition, due to this higher concentration, n-transistors suffer from excessive source/drain to p-well capacitance will tends to be slower in performance.

The well must be grounded in such a way as to minimize any voltage drop due to injected current in substrate that is collected by the p-well.

The p-well act as substrate for then-devices within the parent n-substrate, and, provided polarity restrictions are observed, the two areas are electrically isolated such that there are in affect two substrate, two substrate connections (VDD and VSS) are required.

The p-well processes have been one of the most commonly available forms of CMOS. However, an advantage of the n-well process is that it can be fabricated on the same process line as conventional n MOS.

Typically n-well fabrication steps are similar to a p-well process, except that an n-well is used which is illustrated in Fig. . The first masking step defines the n-well regions.

This followed by a low phosphorus implant driven in by a high temperature diffusion step to form the n-wells.

The well depth is optimized to ensure against p-substrate to p+ diffusion breakdown without compromising the n-well to n+ mask separation.

The next steps are to define the devices and diffusion paths, grow field oxide, deposit and pattern the polysilicon, carry out the diffusions, make contact cuts and metallization. 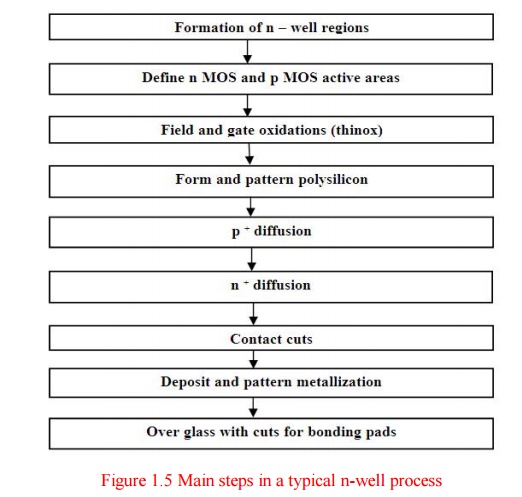 Due to differences in mobility of charge carriers the n-well process creates non-optimum p- channel characteristics, such as high junction capacitance and high body effect. The n-well technology has a distinct advantage of providing optimum device characteristics.

Thus n-channel devices may be used to form logic elements to provide speed and density, while p-transistors could primarily serve as pull-up devices.

Twin-tub CMOS technology provides the basis for separate optimization of the p-type and n-type transistors, thus making it possible for threshold voltage, body effect, and the gain associated with n- and p-devices to be independently optimized.

Generally the starting material is either an n+ or p+ substrate with a lightly doped epitaxial or epi layer, which is used for protection against latch-up.

The aim of epitaxial is to grow high purity silicon layers of controlled thickness with accurately determined dopant concentrations distributed homogeneously throughout the layer. The electrical properties for this layer are determined by the dopant and its concentration in the silicon.

The process sequence, which is similar to the p-well process apart from the tub formation where both p-well and n-well are utilized as in Fig. 1.7, entails the following steps: 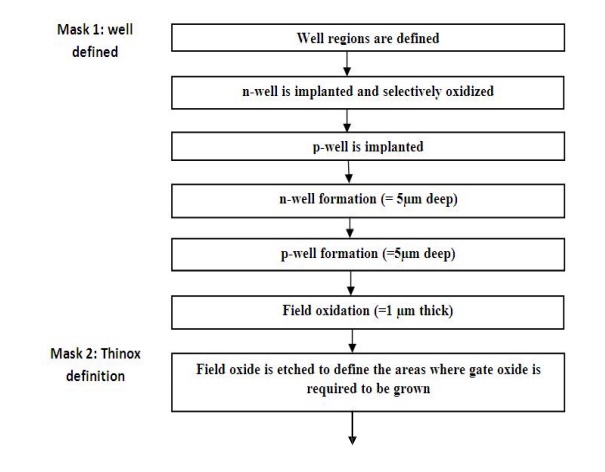 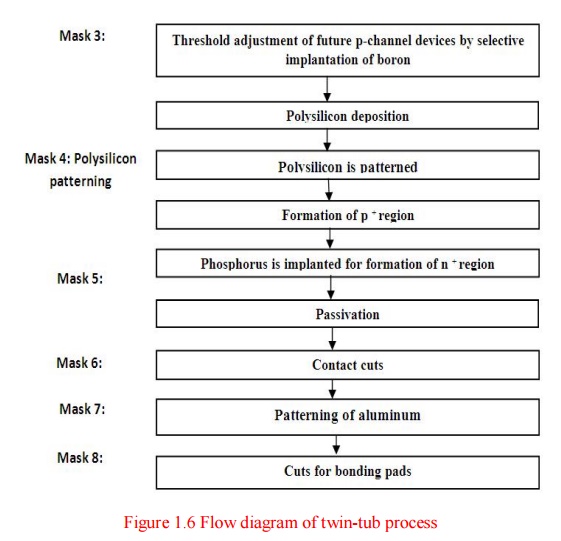 Similarly the p-transistors may be optimized. The use of threshold adjust steps is included in this process.

In the SOI process a thin layer of single crystal silicon film is epitaxial grown on an insulator such as sapphire or magnesium aluminates spinal. The steps involves are: 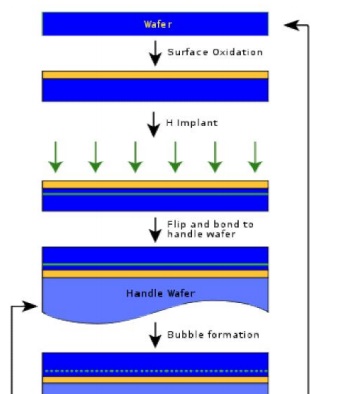 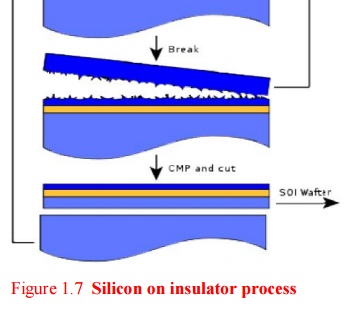 1) A thin film (7-8 µ m) of very lightly doped n-type Si is grown over an insulator Sapphire is a commonly used insulator.

2)       An anisotropic etch is used to etch away the Si except where a diffusion area will be needed.

4)       The p-islands are then covered with a photo resist and an n-type dopant, phosphorus, is implanted to form the n-islands .The n-islands will become the p-channel devices.

5) A thin gate oxide (500-600Å ) is grown over all of the Si structures. This is normally done by thermal oxidation.

8)       The next step is to form the n-doped source and drain of the n-channel devices in the p- islands. The n-island is covered with a photo resist and an n-type dopant (phosphorus) is implanted.

§   Due to the absence of wells, denser structures than bulk silicon can be obtained.

§   No latch-up due to isolation of n- and p- transistors by insulating substrate.

§   As there is no conducting substrate, there are no body effect problems

But the drawback is due to absence of substrate diodes, the inputs are difficult to protect. As device gains are lower, I/O structures have to be larger. Single crystal sapphires are more expensive than silicon and processing techniques tend to be less developed than bulk silicon techniques.