The general arrangement and characteristics are illustrated in Fig. 1 . 1 .

The general arrangement and characteristics are illustrated in Fig. 1 . 1 . The current/voltage relationships for the MOS transistor may be written as, 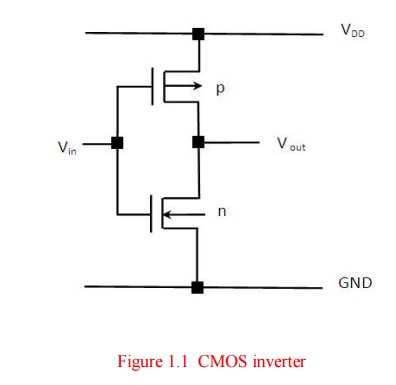 Where Wn and Ln, Wp and Lp are the n- and p- transistor dimensions respectively. The CMOS inverter has five regions of operation is shown in Fig.1.2 and in Fig. 1.3. 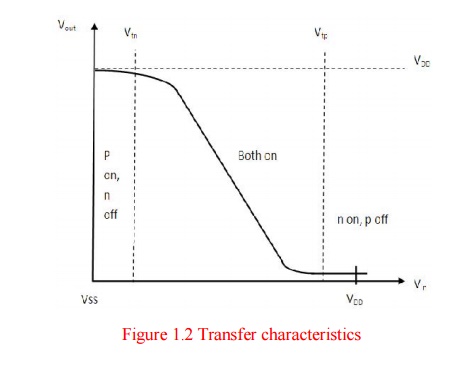 In region 2 the input voltage has increased to a level which just exceeds the threshold voltage of the n-transistor. The n-transistor conducts and has a large voltage between source and drain. The p- transistor also conducting but with only a small voltage across it, it operates in the unsaturated resistive region 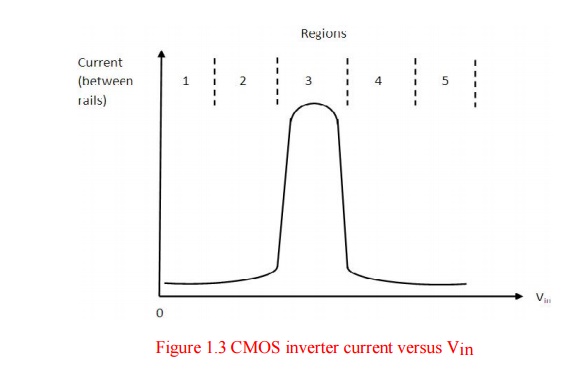 In region 4 is similar to region 2 but with the roles of the p- and n- transistors reversed.

The current magnitudes in region 2 and 4 are small and most of the energy consumed in switching from one state to the other is due to the large current which flows in region 3.

In region 3 is the region in which the inverter exhibits gain and in which both transistors are in saturation.

The currents in each device must be the same since the transistors are in series. So we may

The region is inherently unstable in consequence and the change over from one logic level to the other is rapid.

Since only at this point will the two β factors be equal. But for βn= βp the device geometries must be such that

The motilities are inherently unequal and thus it is necessary for the width to length ratio of the p- device to be three times that of the n-device, namely

The mobility µ is affected by the transverse electric field in the channel and is thus independent onVgs.

It has been shown empirically that the actual mobility is

Ø        is a constant approximately equal to 0.05 Vt includes anybody effect, and µ z is the mobility with zero transverse field.