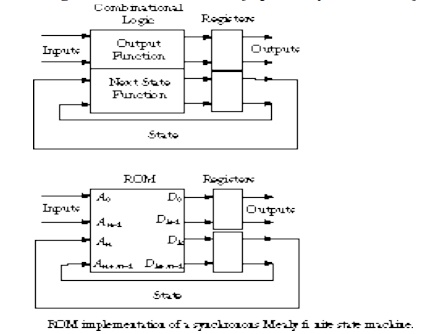 A circuit which has no hazard like static-0-hazard and static-1-hazard is called hazard free digital circuit.

3.         What are the basic building blocks of a algorithmic state machine chart?

4.         What are the two types of asynchronous sequential circuits?

The unwanted switching transients (glitches) that may appear at the output of a circuit are called Hazards.

·              A conventional flow chart describes the square of procedural steps and decision paths for an algorithm without concern for their time relationship.

·              The ASM chart describes the sequence of event as well as timing relationship between the states of a sequential controller and the events that occur while going from one state to the next.

A state diagram is a type of diagram used in computer science and related fields to describe the behaviour of systems. State diagrams require that the system described is composed of a finite number of states; sometimes, this is indeed the case, while at other times this is a reasonable abstraction. Many forms of state diagrams exist, which differ slightly and have different semantics.

Architecture struct of HALFADD is

10.      Write a verilog model of a full subtractor circuit.

11.      Under what circumstances asynchronous circuits are prepared.

14.    What is synchronous sequential circuit?

·              In a clocked sequential circuit which has flip-flops or, in some instances, gated latches, for its memory elements there is a (synchronizing) periodic clock connected to the clock inputs of all the memory elements of the circuit, to synchronize all internal changes of state

The unwanted switching transients (glitches) that may appear at the output of a circuit are called Hazards.