An example of an asynchronous sequential circuit is shown below:

The analysis of the circuit starts by considering the excitation variables (Y1 and Y2) as outputs and the secondary variables (y1 and y2) as inputs.

The next step is to plot the Y1 and Y2 functions in a map:

Combining the binary values in corresponding squares the following transition table is obtained: 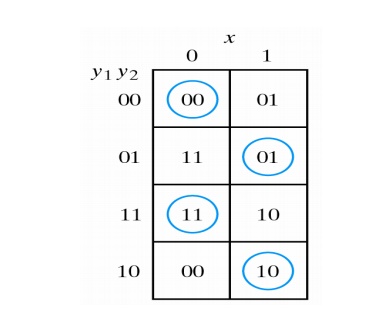 The transition table shows the value of Y = Y1Y2 inside each square. Those entries where Y = y are circled to indicate a stable condition.

In a flow table the states are named by letter symbols. Examples of flow tables are as follows:

In order to obtain the circuit described by a flow table, it is necessary to assign to each state a distinct value. This assignment converts the flow table into a transition table. This is shown below:

The resulting logic diagram is shown below:

If the final stable state that the circuit reaches does not depend on the order in which the state variables change, the race is called a non critical race. Examples of non critical races are illustrated in the transition tables below:

Races can be avoided by directing the circuit through a unique sequence of intermediate unstable states. When a circuit does that, it is said to have a cycle.

Examples of cycles are: 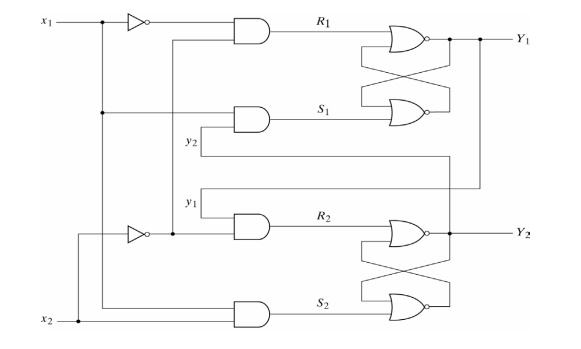 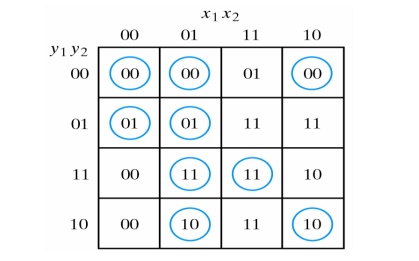 Investigation of the transition table reveals that the circuit is stable. There is a critical race condition when the circuit is initially in total state y1y2x1x2 = 1101 and x2 changes from 1 to 0. If Y1 changes to 0 before Y2, the circuit goes to total state 0100 instead of 0000.

There are a number of steps that must be carried out in order to minimize the circuit complexity and to produce a stable circuit without critical races. Briefly, the design steps are as follows:

3.           Assign binary states variables to each row of the reduced flow table to obtain the transition table.

4.           Assign output values to the dashes associated with the unstable states to obtain the output maps.

5.           Simplify the Boolean functions of the excitation and output variables and draw the logic diagram.

The design process will be demonstrated by going through a specific example:

Design a gated latch circuit with two inputs, G (gate) and D (data), and one output Q. The gated latch is a memory element that accepts the value of D when G = 1 and retains this value after G goes to 0. Once G = 0, a change in D does not change the value of the output Q.

To derive the primitive flow table, first a table with all possible total states in the system is needed:

The resulting primitive table for the gated latch is shown below: 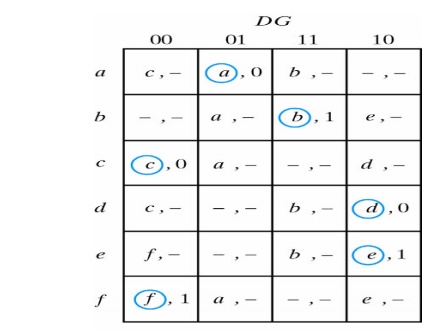 First, we fill in one square in each row belonging to the stable state in that row.

Next recalling that both inputs are not allowed to change at the same time, we enter dash marks in each row that differs in two or more variables from the input variables associated with the stable state.

Next we find values for two more squares in each row. The comments listed in the previous table may help in deriving the necessary information. A dash indicates don’t care conditions.

The primitive flow table can be reduced to a smaller number of rows if two or more stable states are placed in the same row of the flow table. The simplified merging rules are as follows:

1. Two or more rows in the primitive flow table can be merged into one if there are nonconflicting states and outputs in each of the columns.

2. Whenever, one state symbol and don’t care entries are encountered in the same column, the state is listed in the merged row.

4.           The output state is included with each stable state in the merged row. Now apply these rules to the primitive flow table shown previously.

To see how this is done the primitive flow table is separated into two parts of three rows each:

The resulting reduced flow table is as follows:

To obtain the circuit described by the reduced flow table, a binary value must be assigned to each state. This converts the flow table to a transition table.

In assigning binary states, care must be taken to ensure that the circuit will be free of critical races. No critical races can occur in a two-row flow table.

Assigning 0 to state a and 1 to state b in the reduced flow table, the following transition table is obtained:

The transition table is, in effect, a map for the excitation variable Y. The simplified Boolean function for Y as obtained from the map is:

There are two don’t care outputs in the final reduced flow table. By assigning values to the output as shown below:

It is possible to make output Q equal to Y. If the other possible values are assigned to the don’t care outputs, output Q is made equal to y. In either case, the logic diagram of the gated latch is as follows:

6. REDUCTION OF STATE AND FLOW TABLES

The procedure for reducing the number of internal states in an asynchronous sequential circuit resembles the procedure that is used for synchronous circuits.

The state-reduction procedure for completely specified state tables is based on the algorithm that two states in a state table can be combined into one if they can be shown to be equivalent.

There are occasions when a pair of states do not have the same next states, but, nonetheless, go to equivalent next states.

The checking of each pair of states for possible equivalence in a table with a large number of states can be done systematically by means of an implication table. This a chart that consists of squares, one for every possible pair of states, that provide spaces for listing any possible implied states.

The implication table is: 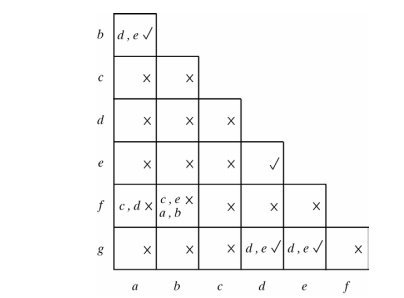 The states that are not equivalent are marked with a ‘x’ in the corresponding square, whereas their equivalence is recorded with a ‘√’.

Some of the squares have entries of implied states that must be further investigated to determine whether they are equivalent or not.

The step-by-step procedure of filling in the squares is as follows:

1.           Place a cross in any square corresponding to a pair of states whose outputs are not equal for every input.

2.           Enter in the remaining squares the pairs of states that are implied by the pair of states representing the squares. We do that by starting from the top square in the left column and going down and then proceeding with the next column to the right.

3.           Make successive passes through the table to determine whether any additional squares should be marked with a ‘x’. A square in the table is crossed out if it contains at least one implied pair that is not equivalent.

The reduced state table is:

8. Merging of the Flow Table

There are occasions when the state table for a sequential circuit is incompletely specified.

Incompletely specified states can be combined to reduce the number of states in the flow table. Such states cannot be called equivalent,

but, instead they are said to be compatible.

The process that must be applied in order to find a suitable group of compatibles for the purpose of merging a flow table is divided into three steps:

1.           Determine all compatible pairs by using the implication table.

3.           Find a minimal collection of compatibles that covers all the states and is closed.

We will now proceed to show and explain the three procedural steps using the following primitive flow table: 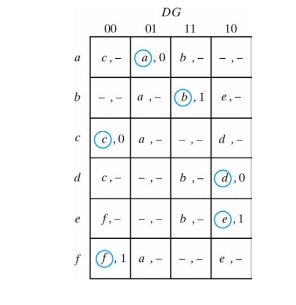 Two states are compatible if in every column of the corresponding rows in the flow table, they are identical or compatible states and if there is no conflict in the output values.

The compatible pairs (√) are: 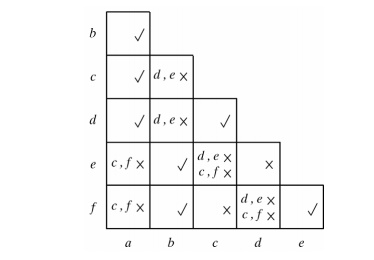 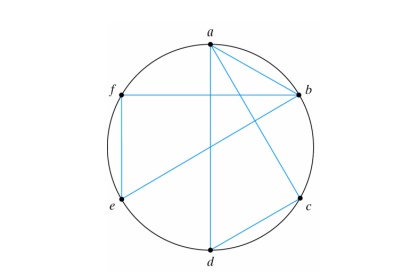 In the case where a state is not compatible to any other state, an isolated dot represents this state.