Hypomagnesemia is a common and frequently overlooked problem, particularly in critically ill patients, and is often associated with deficiencies of other intracellular components such as potassium and phosphorus.

Hypomagnesemia is a common and frequently overlooked problem, particularly in critically ill patients, and is often associated with deficiencies of other intracellular components such as potassium and phosphorus. It is commonly found in patients undergoing major cardiothoracic or abdominal operations, and its incidence among patients in intensive care units may exceed 50%. Deficiencies of magnesium are generally the result of inadequate intake, reduced gastrointestinal absorption, and increased renal excretion ( Table 49–13). Drugs that cause renal wasting of magnesium include ethanol, theophylline, diuretics, cisplatin, aminoglycosides, cyclosporine, amphotericin B, pentamidine, and granulocyte colony-stimulating factor. 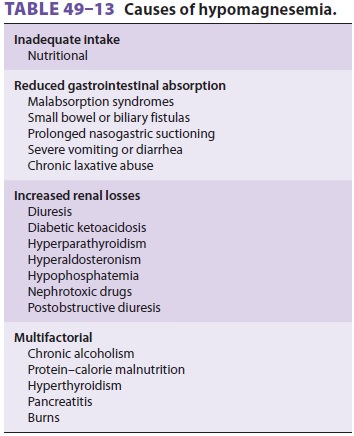 Most patients with hypomagnesemia are asymp-tomatic, but anorexia, weakness, fasciculation, par-esthesias, confusion, ataxia, and seizures may be encountered. Hypomagnesemia is frequently associ-ated with both hypocalcemia (impaired PTH secre-tion) and hypokalemia (due to renal K  wasting). Cardiac manifestations include electrical irritability and potentiation of digoxin toxicity; both factors are aggravated by hypokalemia. Hypomagnesemia is associated with an increased incidence of atrial fibrillation. Prolongation of the P–R and QT inter-vals may also be present.

Asymptomatic hypomagnesemia can be treated orally or intramuscularly. Serious manifestations such as seizures should be treated with intravenous magnesium sulfate, 1–2 g (8–16 mEq or 4–8 mmol) given slowly over 15–60 min.

Although no specific anesthetic interactions are described, coexistent electrolyte disturbances such as hypokalemia, hypophosphatemia, and hypocalce-mia are often present and should be corrected prior to surgery. Isolated hypomagnesemia should be corrected prior to elective proceduresbecause of its potential for causing cardiac arrhyth-mias. Moreover, magnesium appears to have intrin-sic antiarrhythmic properties and possibly cerebral protective effects . It is frequently administered preemptively to lessen the risk of post-operative atrial fibrillation in patients undergoing cardiac surgery.