Body water is distributed between two major fluid compartments separated by cell membranes: intra-cellular fluid (ICF) and extracellular fluid (ECF). The latter can be further subdivided into intra-vascular and interstitial compartments. The inter-stitium includes all fluid that is both outside cells and outside the vascular endothelium. The relative contributions of each compartment to total body water (TBW) and body weight are delineated in Table 49–1. 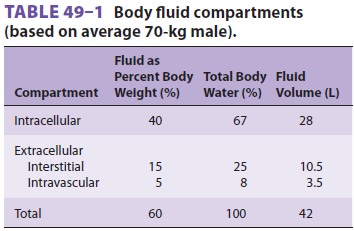 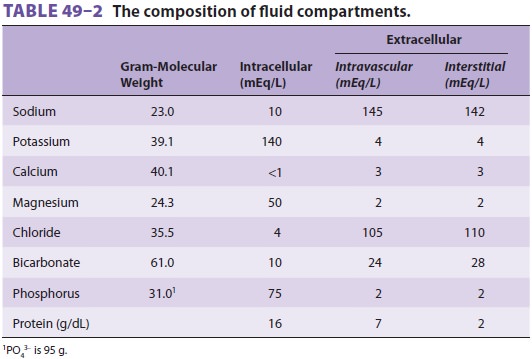 The volume of fluid (water) within a compart-ment is determined by its solute composition and concentrations (Table 49–2). Differences in solute concentrations are largely due to the characteristics of the physical barriers that separate compartments . The osmotic forces created by “trapped” solutes govern the distribution of water between com-partments and ultimately each compartment’s volume.

The outer membrane of cells plays an important role in regulating intracellular volume and compo-sition. A membrane-bound adenosine triphosphate (ATP)–dependent pump exchanges Na+ for K+ in a 3:2 ratio. Because cell membranes are relatively impermeable to sodium and (to a lesser extent) potassium ions, potassium is concentrated intracellularly, whereas sodium is concentrated extra-cellularly. As a result, potassium is the mostimportant determinant of intracellular osmotic pressure, whereas sodium is the most important determinant of extracellular osmotic pressure.

The impermeability of cell membranes to most proteins results in a high intracellular protein con-centration. Because proteins act as nondiffusible sol-utes (anions), the unequal exchange ratio of 3 Na+ for 2 K+ by the cell membrane pump is critical in preventing relative intracellular hyperosmolality. Interference with Na+–K+-ATPase activity, as occurs during ischemia or hypoxia, results in progressive swelling of cells.

The principal function of ECF is to provide a medium for delivery of cell nutrients and electro-lytes and for removal of cellular waste products. Maintenance of a normal extracellular volume— particularly the circulating component (intravascu-lar volume)—is critical. For the reasons described above, sodium is quantitatively the most important extracellular cation and the major determinant of extracellular osmotic pressure and volume. Changes in ECF volume are therefore related to changes in total body sodium content. The latter is a function of sodium intake, renal sodium excretion, and extrare-nal sodium losses .

Because only small quantities of plasma pro-teins can normally cross capillary clefts, the pro-tein content of interstitial fluid is relatively low (2 g/dL). Protein entering the interstitial space is returned to the vascular system via the lymphatic system.

Intravascular fluid, commonly referred to as plasma, is restricted to the intravascular space by the vas-cular endothelium. Most electrolytes (small ions) freely pass between plasma and the interstitium, resulting in nearly identical electrolyte composi-tion. However, the tight intercellular junctions between adjacent endothelial cells impede the pas-sage of plasma proteins to outside the intravascular compartment. As a result, plasma proteins (mainly albumin) are the only osmotically active solutes in fluid not normally exchanged between plasma and interstitial fluid. 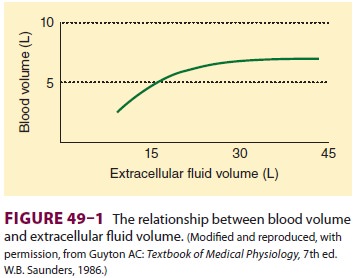 Diffusion is the random movement of molecules due to their kinetic energy and is responsible for the majority of fluid and solute exchange between com-partments. The rate of diffusion of a substance across a membrane depends upon (1) the permeability of that substance through that membrane, (2) the con-centration difference for that substance between the two sides, (3) the pressure difference between either side because pressure imparts greater kinetic energy, and (4) the electrical potential across the membrane for charged substances.

Diffusion between interstitial fluid and ICF may take place by one of several mechanisms: (1) directly through the lipid bilayer of the cell mem-brane, (2) through protein channels within the membrane, or (3) by reversible binding to a carrier protein that can traverse the membrane (facilitated diffusion). Oxygen, CO2, water, and lipid-soluble molecules penetrate the cell membrane directly. Cations such as Na+, K+, and Ca 2+ penetrate the membrane poorly because of the cell transmem-brane voltage potential (which is positive to the outside) created by the Na+–K+ pump. Therefore, these cations can diffuse only through specific pro-tein channels. Passage through these channels is

dependent on membrane voltage and the binding of ligands (such as acetylcholine) to the membrane receptors. Glucose and amino acids diffuse with the help of membrane-bound carrier proteins. Fluid exchange between the intracellular and interstitial spaces is governed by the osmoticforces created by differences in nondiffusible sol-ute concentrations. Relative changes in osmolality between the intracellular and interstitial compart-ments result in a net water movement from the hypoosmolar to the hyperosmolar compartment.

Capillary walls are typically 0.5 µm thick, consist-ing of a single layer of endothelial cells with their basement membrane. Intercellular clefts, 6–7 nm wide, separate each cell from its neighbors. Oxygen, CO2, water, and lipid-soluble substances can pen-etrate directly through both sides of the endothelial cell membrane. Only low-molecular-weight water-soluble substances such as sodium, chloride, potas-sium, and glucose readily cross intercellular clefts. High-molecular-weight substances such as plasma proteins penetrate the endothelial clefts poorly (except in the liver and the lungs, where the clefts are larger). 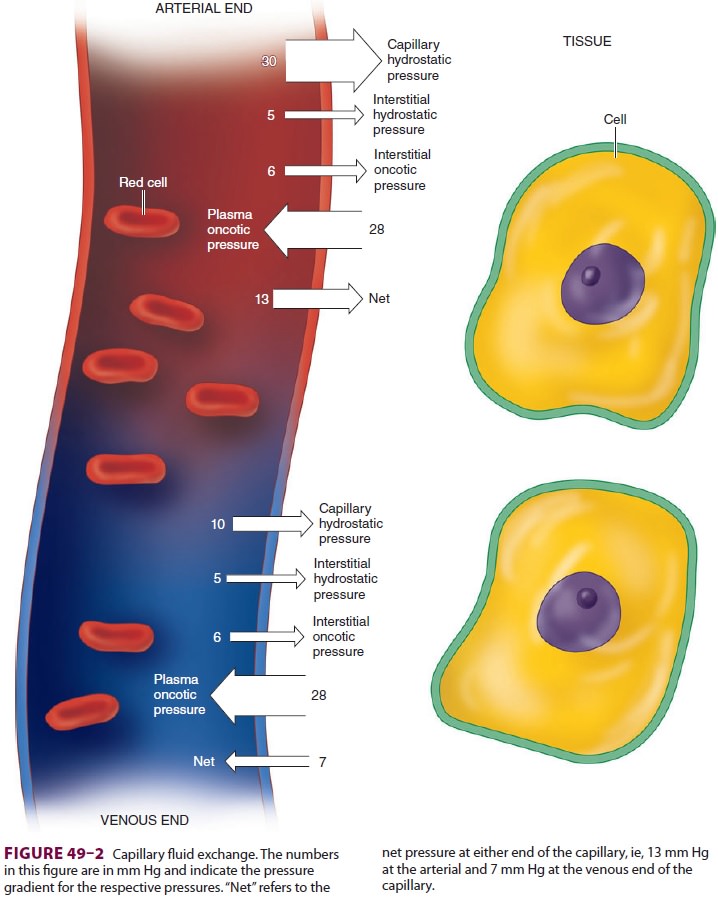