Hypocalcemia should be diagnosed only on the basis of the plasma ionized calcium concentration. 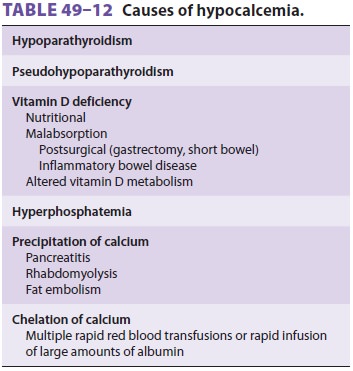 Hypocalcemia due to hypoparathyroidism is a relatively common cause of symptomatic hypocal-cemia. Hypoparathyroidism may be surgical, idio-pathic, part of multiple endocrine defects (most often with adrenal insufficiency), or associated with hypomagnesemia. Magnesium deficiency may impair the secretion of PTH and antagonize the effects of PTH on bone. Hypocalcemia during sep-sis is also thought to be due to suppression of PTH release. Hyperphosphatemia  is also a relatively common cause of hypocalcemia, particu-larly in patients with chronic renal failure. Hypo-calcemia due to vitamin D deficiency may be the result of a markedly reduced intake (nutritional), vitamin D malabsorption, or abnormal vitamin D metabolism.

Manifestations of hypocalcemia include paresthe-sias, confusion, laryngeal stridor (laryngospasm), carpopedal spasm (Trousseau’s sign), masseter spasm (Chvostek’s sign), and seizures. Biliary colic and bronchospasm have also been described. ECG may reveal cardiac irritability or QT interval pro-longation, which may not correlate in severity with the degree of hypocalcemia. Decreased cardiac con-tractility may result in heart failure, hypotension,or both. Decreased responsiveness to digoxin and β-adrenergic agonists may also occur.

Symptomatic hypocalcemia is a medical emer-gency and should be treated immediately withintravenous calcium chloride (3–5 mL of a 10% solu-tion) or calcium gluconate (10–20 mL of a 10% solu-tion). (Ten milliliters of 10% CaCl 2 contains 272 mg of Ca2+, whereas 10 mL of 10% calcium gluconate contains only 93 mg of Ca2+.) To avoid precipita-tion, intravenous calcium should not be given with bicarbonate- or phosphate-containing solutions. Serial ionized calcium measurements are manda-tory. Repeat boluses or a continuous infusion (Ca 2+ 1–2 mg/kg/h) may be necessary. Plasma magnesium concentration should be checked to exclude hypo-magnesemia. In chronic hypocalcemia, oral calcium (CaCO3) and vitamin D replacement are usually necessary.

Significant hypocalcemia should be corrected pre-operatively. Serial ionized calcium levels should be monitored intraoperatively in patients with a his-tory of hypocalcemia. Alkalosis should be avoided to prevent further decreases in [Ca2+]. Intravenous cal-cium may be necessary following rapid transfusions of citrated blood products or large volumes of albu-min solutions. Potentiation of the negative inotropic effects of barbiturates and volatile anesthetics should be expected. Responses to NMBs are inconsistent and require close monitoring with a nerve stimulator.