Net sodium balance is equal to total sodium intake (adults average 170 mEq/d) minus both renal sodium excretion and extrarenal sodium losses. (One gram of sodium yields 43 mEq of Na  ions, whereas 1 g of sodium chloride yields 17 mEq of Na+ ions.) The kidneys’ ability to vary urinary Na + excretion from less than 1 mEq/L to more than 100 mEq/L allows them to play a critical role in sodium balance .

Because of the relationship between ECF volume and total body sodium content, regulation of one is intimately tied to the other. This regulation is achieved via sensors  that detect changes in the most important component of ECF, namely, the “effective” intravascular volume. The latter corre-lates more closely with the rate of perfusion in renal capillaries than with measurable intravascular fluid (plasma) volume. Indeed, with edematous disorders (heart failure, cirrhosis, and kidney failure), “effec-tive” intravascular volume can be independent of the measurable plasma volume, ECF volume, and even cardiac output.

A. Sensors of Volume

Baroreceptors are the principal volume receptors in the body. Because blood pressure is the product of cardiac output and systemic vascular resistance , significant changes in intravascular vol-ume (preload) not only affect cardiac output but also transiently affect arterial blood pressure. Thus, the baroreceptors at the carotid sinus and afferent renal arterioles (juxtaglomerular apparatus) indirectly function as sensors of intravascular volume. Changes in blood pressure at the carotid sinus modulate sym-pathetic nervous system activity and nonosmotic ADH secretion, whereas changes at the afferent renal arterioles modulate the renin–angiotensin– aldosterone system. Stretch receptors in both atria are affected by changes in intravascular volume, and the degree of atrial distention modulates the release of atrial natriuretic hormone and ADH.

B. Effectors of Volume Change

Renin–angiotensin–aldosterone—Renin secre-tion increases the formation of angiotensin II. The latter increases the secretion of aldosterone and has a direct effect in enhancing Na+ reabsorption in the proximal renal tubules. Angiotensin II is also a potent direct vasoconstrictor and potentiates the actions of norepinephrine. Secretion of aldosterone enhances Na+ reabsorption in the distal nephron  and is a major determinant of uri-nary Na+ excretion.

Brain natriuretic peptide (BNP)—ANP, BNP, and C-type natriuretic peptide are structurally related peptides. BNP is released by the ventricles in response to increased ventricular volume and pressure, and ventricular overdistention, and also by the brain in response to increased blood pressure. BNP levels are usually approximately 20% of ANP levels, but dur-ing an episode of acute congestive heart failure BNP levels may exceed those of ANP. BNP levels can be measured clinically, and a recombinant form of BNP, nesiritide (Natrecor), is available to treat acute decompensated congestive heart failure.

Tubuloglomerular balance—Despite wide varia-tions in the amount of Na+ fi ltered in nephrons, Na+ reabsorption in the proximal renal tubules is normally controlled within narrow limits. Factors considered to be responsible for tubuloglomerular balance include the rate of renal tubular flow and changes in peri-tubular capillary hydrostatic and oncotic pressures. Altered Na+ reabsorption in the proximal tubules can have a marked effect on renal Na+ excretion.

Antidiuretic hormone—Although ADH secre-tion has little effect on Na + excretion, nonosmotic secretion of this hormone (see above) can play an important part in maintaining extracellular volume with moderate to severe decreases in the “effective” intravascular volume. 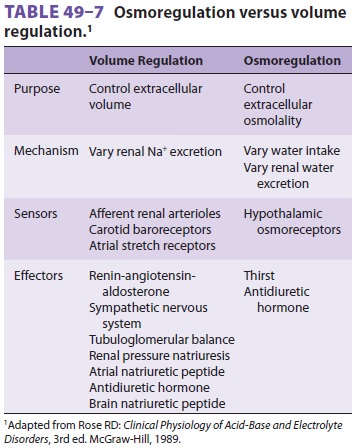 Problems related to altered sodium balance result from its manifestations as well as the underlying disorder. Disorders of sodium balance present either as hypovolemia (sodium deficit) or hypervolemia (sodium excess). Both disturbances should be cor-rected prior to elective surgical procedures. Cardiac, liver, and renal function should also be carefully evaluated in the presence of sodium excess (gener-ally manifested as tissue edema).

Hypovolemic patients are sensitive to the vaso-dilating and negative inotropic effects of vapor anesthetics, propofol, and agents associated with histamine release (morphine, meperidine). Dosagerequirements for other drugs must also be reduced to compensate for decreases in their volume of dis-tribution. Hypovolemic patients are particularly sensitive to sympathetic blockade from spinal or epidural anesthesia. If an anesthetic must be admin-istered prior to adequate correction of hypovolemia, etomidate or ketamine may be the induction agents of choice for general anesthesia. Hypervolemia should generally be corrected preoperatively with diuretics. The major haz-ard of increases in extracellular volume isimpaired gas exchange due to pulmonary interstitial edema, alveolar edema, or large collections of pleu-ral or ascitic fluid.