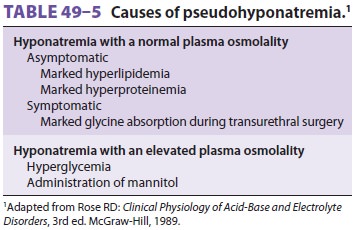 Hyponatremia invariably reflects water reten-tion from either an absolute increase in TBW or a loss of sodium in relative excess to loss of water. The kidneys’ normal capacity to produce dilute urine with an osmolality as low as 40 mOsm/kg (specific gravity 1.001) allows them to excrete over 10 L of free water per day if necessary. Because of this tre-mendous reserve, hyponatremia is nearly always the result of a defect in urinary diluting capacity (urinary osmolality > 100 mOsm/kg or specific gravity > 1.003). Rare instances of hyponatremia without an abnormality in renal diluting capacity (urinary osmolality < 100 mOsm/kg) are generally attributed to primary polydipsia or reset osmorecep-tors; the latter two conditions can be differentiated by water restriction. 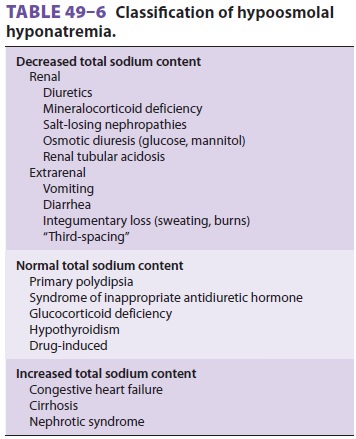 Progressive losses of both sodium and water even-tually lead to extracellular volume depletion. As the intravascular volume deficit reaches 5–10%, non-osmotic ADH secretion is activated (see above). With further volume depletion, the stimuli for nonosmotic ADH release overcome any hypona-tremia-induced suppression of ADH. Preservation of circulatory volume takes place at the expense of plasma osmolality.

Fluid losses resulting in hyponatremia may be renal or extrarenal in origin. Renal losses are most commonly related to thiazide diuretics and result in a urinary [Na+] greater than 20 mEq/L. Extrare-nal losses are typically gastrointestinal and usually produce a urinary [Na+] of less than 10 mEq/L. A major exception to the latter is hyponatremia due to vomiting, which can result in a urinary [Na+] greater than 20 mEq/L. In those instances, bicar-bonaturia from the associated metabolic alkalosis obligates concomitant excretion of Na + with HCO 3 to maintain electrical neutrality in the urine; urinary chloride concentration, however, is usually less than 10 mEq/L.

Edematous disorders are characterized by an increase in both total body sodium and TBW. When the increase in water exceeds that in sodium, hypo-natremia occurs. Edematous disorders include con-gestive heart failure, cirrhosis, kidney failure, and nephrotic syndrome. Hyponatremia in these set-tings results from progressive impairment of renal free water excretion and generally parallels underly-ing disease severity. Pathophysiological mechanisms include nonosmotic ADH release and decreased delivery of fluid to the distal diluting segment in nephrons . The “effective” circulat-ing blood volume is reduced.

Hyponatremia in the absence of edema or hypovo-lemia may be seen with glucocorticoid insufficiency, hypothyroidism, drug therapy (chlorpropamide and cyclophosphamide), and the syndrome of inap-propriate antidiuretic hormone secretion (SIADH). The hyponatremia associated with adrenal hypo-function may be due to cosecretion of ADH with corticotropin-releasing factor (CRF). Diagnosis of SIADH requires exclusion of other causes of hypo-natremia and the absence of hypovolemia, edema, and adrenal, renal, or thyroid disease. Various malignant tumors, pulmonary diseases, and central nervous system disorders are commonly associated with SIADH. In most such instances, plasma ADH concentration is not elevated but is inadequately suppressed relative to the degree of hypoosmolality in plasma; urine osmolality is usually greater than 100 mOsm/kg and urine sodium concentration is greater than 40 mEq/L.

Symptoms of hyponatremia are primarily neuro-logical and result from an increase in intracellular water. Their severity is generally related to the rapid-ity with which extracellular hypoosmolality devel-ops. Patients with mild to moderate hyponatremia ([Na+] > 125 mEq/L) are frequently asymptomatic. Early symptoms are typically nonspecific and may include anorexia, nausea, and weakness. Pro-gressive cerebral edema, however, results in leth-argy, confusion, seizures, coma, and finally death.Serious manifestations of hyponatremia are generally associated with plasma sodium concentrations less than 120 mEq/L. Compared with men, premenopausal women appear to be at greater risk of neurological impairment and damage from hyponatremia.

Patients with slowly developing or chronic hyponatremia are generally less symptomatic, prob-ably because the gradual compensatory loss of intra-cellular solutes (primarily Na +, K+, and amino acids) restores cell volume to near normal. Neurological symptoms in patients with chronic hyponatremia may be related more closely to changes in cell mem-brane potential (due to a low extracellular [Na +]) than to changes in cell volume.

As with hypernatremia, the treatment of hypona-tremia (Figure 49–4) is directed at correcting both the underlying disorder as well as the plasma [Na+].Isotonic saline is generally the treatment of choice for hyponatremic patients with decreased total body sodium content. Once the ECF deficit is cor-rected, spontaneous water diuresis returns plasma [Na+] to normal. Conversely, water restriction is the primary treatment for hyponatremic patients with normal or increased total body sodium. Morespecific treatments such as hormone replacement in patients with adrenal or thyroid hypofunction and measures aimed at improving cardiac output in patients with heart failure may also be indicated. Demeclocycline, a drug that antagonizes ADH activity at the renal tubules, has proved to be a use-ful adjunct to water restriction in the treatment of patients with SIADH. 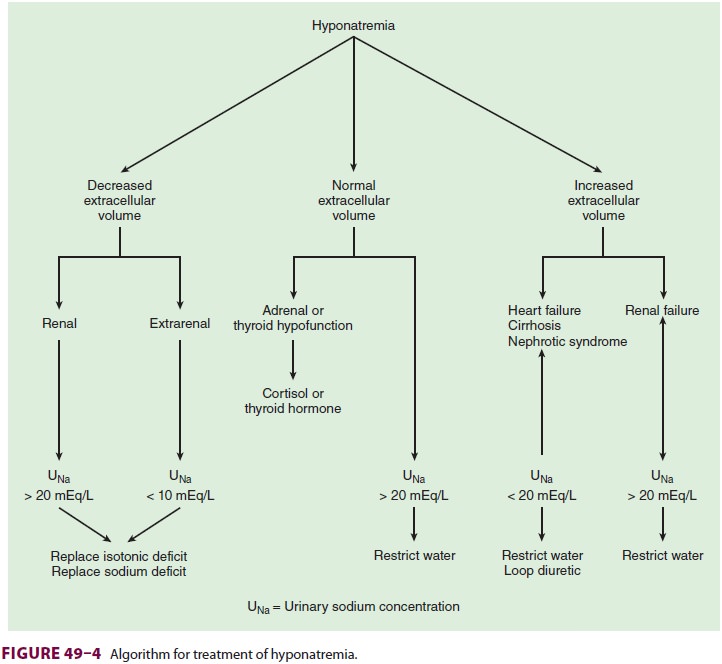 Acute symptomatic hyponatremia requires prompt treatment. In such instances, correction of plasma [Na+] to greater than 125 mEq/L is usu-ally sufficient to alleviate symptoms. The amount of NaCl necessary to raise plasma [Na+] to the desired value, the Na+ deficit, can be estimated by the follow-ing formula:

Excessively rapid correction of hyponatre-mia has been associated with demyelinating lesions in the pons (central pontine myelinolysis), resulting in permanent neurological sequelae. The rapidity with which hyponatremia is corrected should be tailored to the severity of symptoms. The following correction rates have been suggested: for mild symptoms, 0.5 mEq/L/h or less; for moderate symptoms, 1 mEq/L/h or less; and for severe symp-toms, 1.5 mEq/L/h or less.

TBW is approximately 50% of body weight in females:

Note that this calculation does not take into account any coexisting isotonic fluid deficits, which, if present, should also be replaced. More rapid cor-rection of hyponatremia can be achieved by giving a loop diuretic to induce water diuresis while replacing urinary Na+ losses with isotonic saline. Even more rapid corrections can be achieved with intravenous hypertonic saline (3% NaCl). Hypertonic saline may be indicated in markedly symptomatic patients with plasma [Na+] less than 110 mEq/L. Three percent NaCl should be given cautiously as it can precipi-tate pulmonary edema, hypokalemia, hyperchlore-mic metabolic acidosis, and transient hypotension; bleeding has been associated with prolongation of the prothrombin time and activated partial throm-boplastin time.

Hyponatremia is often a manifestation of a serious underlying disorder and requires careful preop-erative evaluation. A plasma sodium concentration greater than 130 mEq/L is usually considered safe for patients undergoing general anesthesia. In most circumstances, plasma [Na+] should be corrected to greater than 130 mEq/L for elective procedures, even in the absence of neurological symptoms. Lower concentrations may result in significant cere-bral edema that can be manifested intraoperatively as a decrease in minimum alveolar concentration or postoperatively as agitation, confusion, or somno-lence. Patients undergoing transurethral resection of the prostate can absorb signì cant amounts of water from irrigation fluids (as much as 20 mL/min) and are at high risk for rapid development of pro-found acute water intoxication.