Hyperosmolality occurs whenever total body solute content increases relative to TBW and is usually, but not always, associated with hypernatremia ([Na+]145 mEq/L).

Hyperosmolality occurs whenever total body solute content increases relative to TBW and is usually, but not always, associated with hypernatremia ([Na+]145 mEq/L). Hyperosmolality without hyperna-tremia may be seen during marked hyperglycemia or following the accumulation of abnormal osmoti-cally active substances in plasma (see above). In the latter two instances, plasma sodium concentration may actually decrease as water is drawn from the intracellular to the extracellular compartment. For every 100 mg/dL increase in plasma glucose con-centration, plasma sodium decreases approximately 1.6 mEq/L.

Hypernatremia is nearly always the result of either a relative loss of water in excess of sodium (hypotonic fluid loss) or the retention of large quan-tities of sodium. Even when renal concentrating ability is impaired, thirst is normally highly effec-tive in preventing hypernatremia. Hypernatremia is therefore most commonly seen in debilitated patients who are unable to drink, the very aged, the very young, and patients with altered con-sciousness. Patients with hypernatremia may have a low, normal, or high total body sodium content (Table 49–4). 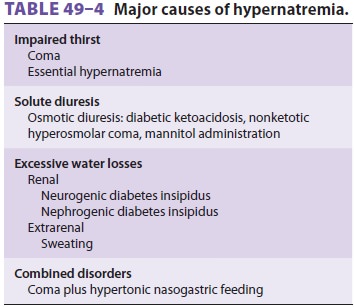 These patients have lost both sodium and water, but the water loss is in relative excess to that of the sodium loss. Hypotonic losses can be renal (osmotic diuresis) or extrarenal (diarrhea or sweat). In either case, patients usually manifest signs of hypovolemia . Urinary sodium concentration is generally greater than 20 mEq/L with renal losses and less than 10 mEq/L with extrarenal losses.

This group of patients generally manifests signs of water loss without overt hypovolemia unless the water loss is massive. Total body sodium content is generally normal. Nearly pure water losses can occur via the skin, respiratory tract, or kidneys. Occasionally transient hypernatremia is observed with movement of water into cells following exer-cise, seizures, or rhabdomyolysis. The most com-mon cause of hypernatremia in conscious patients with normal total body sodium content is diabetesinsipidus. Diabetes insipidus is characterized bymarked impairment in renal concentrating ability that is due either to decreased ADH secretion (cen-tral diabetes insipidus) or failure of the renal tubules to respond normally to circulating ADH (nephro-genic diabetes insipidus). Rarely, “essential hyperna-tremia” may be encountered in patients with central nervous system disorders. These patients appear to have “reset” osmoreceptors that function at a higher baseline osmolality.

Lesions in or around the hypothalamus and the pituitary stalk frequently produce diabetes insipi-dus. Diabetes insipidus often develops with brain death. Transient diabetes insipidus is also com-monly seen following neurosurgical procedures and head trauma. The diagnosis is suggested by a his-tory of polydipsia, polyuria (often >6 L/d), and the absence of hyperglycemia. In the perioperative set-ting, the diagnosis of diabetes insipidus is suggested by marked polyuria without glycosuria and a uri-nary osmolality lower than plasma osmolality. The absence of thirst in unconscious individuals leads to marked water losses and can rapidly produce hypo-volemia. The diagnosis of central diabetes insipidus is confirmed by an increase in urinary osmolality following the administration of exogenous ADH. Aqueous vasopressin (5–10 units subcutaneously or intramuscularly every 4–6 h) is the treatment of choice for acute central diabetes insipidus. Vaso-pressin in oil (0.3 mL intramuscularly every day) is longer lasting but is more likely to cause water intoxication. Desmopressin (DDAVP), a synthetic analogue of ADH with a 12- to 24-h duration of action, is available as an intranasal preparation (10–40 mcg/d either as a single daily dose or divided into two doses) that can be used in both ambulatory and perioperative settings.

Nephrogenic diabetes insipidus can be congenital but is more commonly secondary to other dis-orders, including chronic kidney disease, hypo-kalemia and hypercalcemia, sickle cell disease, and hyperproteinemias. Nephrogenic diabetes insipidus can also be secondary to the side effects of some drugs (amphotericin B, lithium, dem-eclocycline, ifosfamide, mannitol). ADH secre-tion in nephrogenic diabetes insipidus is normal, but the kidneys fail to respond to ADH; urinary concentrating ability is therefore impaired. The mechanism may be either a decreased response to circulating ADH or interference with the renal countercurrent mechanism. The diagnosis is confirmed by failure of the kidneys to produce hypertonic urine following the administration of exogenous ADH. Treatment is generally directed at the underlying illness and ensuring an ade-quate fluid intake. Volume depletion by a thia-zide diuretic can paradoxically decrease urinary output by reducing water delivery to collecting tubules. Sodium and protein restriction can simi-larly reduce urinary output.

This condition most commonly results from the administration of large quantities of hypertonic saline solutions (3% NaCl or 7.5% NaHCO 3). Patients with primary hyperaldosteronism and Cushing’s syndrome may also have elevations in serum sodium concentration along with signs of increased sodium retention.

Neurological manifestations predominate in patients with hypernatremia and are generally thought to result from cellular dehydration. Restlessness, leth-argy, and hyperreflexia can progress to seizures, coma, and ultimately death. Symptoms correlate more closely with the rate of movement of water out of brain cells than with the absolute level of hyper-natremia. Rapid decreases in brain volume can rup-ture cerebral veins and result in focal intracerebral or subarachnoid hemorrhage. Seizures and serious neurological damage are common, particularly in children with acute hypernatremia when plasma [Na+] exceeds 158 mEq/L. Chronic hypernatremia is usually better tolerated than the acute form. After 24–48 h, intracellular osmolality begins to rise as a result of increases in intracellular inositol and amino acid (glutamine and taurine) concentrations. As intracellular solute concentration increases, neuro-nal water content slowly returns to normal.

The treatment of hypernatremia is aimed at restor-ing plasma osmolality to normal as well as cor-recting the underlying cause. Water deficits should generally be corrected over 48 h with a hypotonic solution such as 5% dextrose in water . Abnormalities in extracellular volume must also be corrected (Figure 49–3). Hypernatremic patients with decreased total body sodium should be given isotonic fluids to restore plasma volume to normal prior to treatment with a hypotonic solution. Hyper-natremic patients with increased total body sodium should be treated with a loop diuretic along with intravenous 5% dextrose in water. The treatment of diabetes insipidus is discussed above. 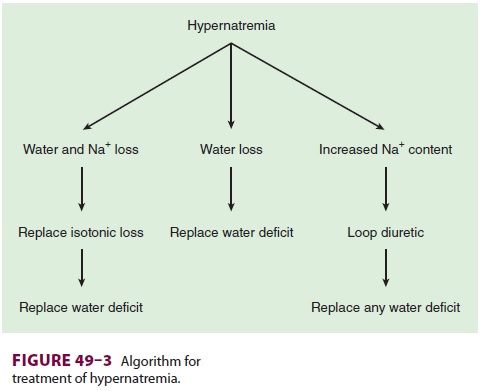 Rapid correction of hypernatremia can result in seizures, brain edema, permanent neurological damage, and even death. Serial Na+ osmolalities should be obtained during treatment. In general, decreases in plasma sodium concentration should not proceed at a rate faster than 0.5 mEq/L/h.

If one assumes that hypernatremia in this cases represents water loss only, then total body osmoles are unchanged. Thus, assuming a normal [Na+] of 140 mEq/L and TBW content that is 60% of body weight:

Note that this method ignores any coexisting isotonic fluid deficits, which if present should be replaced with an isotonic solution.

Hypernatremia has been demonstrated to increase the minimum alveolar concentration for inhalation anesthetics in animal studies, but its clinical signifi-cance is more closely related to the associated fluid deficits. Hypovolemia accentuates any vasodilation or cardiac depression from anesthetic agents and predisposes to hypotension and hypoperfusion of tissues. Decreases in the volume of distribution for drugs necessitate dose reductions for most intrave-nous agents, whereas decreases in cardiac output enhance the uptake of inhalation anesthetics.