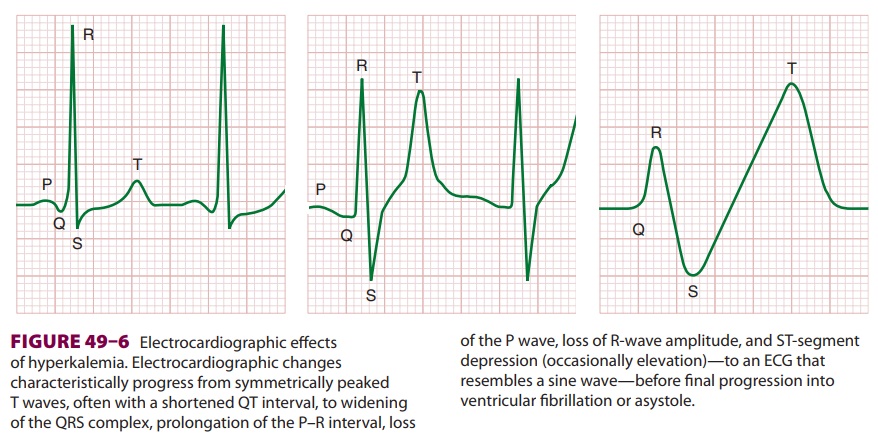 Hyperkalemia exists when plasma [K+] exceeds 5.5 mEq/L. Hyperkalemia rarely occurs in nor-mal individuals because of the kidney’s capability to excrete large potassium loads. When potassium intake is increased slowly, the kidneys can excrete as much as 500 mEq of K+ per day. The sympathetic nervous system and insulin secretion also play important roles in preventing acute increases in plasma [K+] following acquired potassium loads. 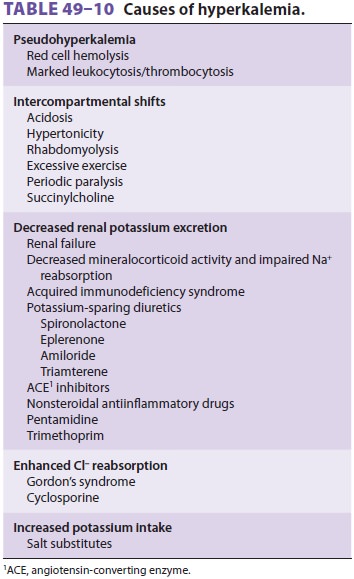 Hyperkalemia due to Extracellular Movement of Potassium

Movement of K+ out of cells can be seen with aci-dosis, cell lysis following chemotherapy, hemolysis,rhabdomyolysis, massive tissue trauma, hyperosmo-lality, digitalis overdoses, during episodes of hyper-kalemic periodic paralysis, and with administration of succinylcholine, β2-adrenergic blockers, and argi-nine hydrochloride. The average increase in plasma [K+] of 0.5 mEq/L following succinylcholine admin-istration can be exaggerated in patients with large burns or severe muscle trauma and in those with muscle denervation, and its use in these settings should be avoided.

β2-Adrenergic blockade accentuates the increasein plasma [K+] that occurs following exercise. Digoxin inhibits Na+–K+-ATPase in cell membranes, and digoxin overdose has been reported to cause hyperkalemia in some patients. Arginine hydro-chloride, which is used to treat metabolic alkalosis, evaluate pituitary growth hormone reserve, and as a performance-enhancing supplement by athletes, can cause hyperkalemia as the cationic arginine ions enter cells and potassium ions move out to maintain electroneutrality.

Hyperkalemia due to Decreased Renal Excretion of Potassium

Decreased renal excretion of potassium can result from (1) marked reductions in glomerular filtration,decreased aldosterone activity, or (3) a defect in potassium secretion in the distal nephron.

Hyperkalemia due to decreased aldosterone activity can result from a primary defect in adre-nal hormone synthesis or a defect in the renin– aldosterone system. Patients with primary adrenal insufficiency (Addison’s disease) and those with isolated 21-hydroxylase adrenal enzyme deficiency have marked impairment of aldosterone synthesis. Patients with the syndrome of isolated hypoaldoste-ronism (also called hyporeninemic hypoaldosteron-ism, or type IV renal tubular acidosis) are usually diabetics with some degree of renal impairment; they have an impaired ability to increase aldosterone secretion in response to hyperkalemia. Although usually asymptomatic, these patients develop hyper-kalemia when they increase their potassium intake or when given potassium-sparing diuretics. They also often have varying degrees of Na+ wasting and a hyperchloremic metabolic acidosis. Similar findings have been reported in patients with AIDS who have relative adrenal insufficiency due to cytomegalovi-rus infection.

Drugs interfering with the renin–aldosterone system have the potential to cause hyperkalemia, particularly in the presence of any degree of renal impairment. Nonsteroidal antiinflammatory drugs (NSAIDs) inhibit prostaglandin-mediated renin release. Angiotensin-converting enzyme (ACE) inhibitors interfere with angiotensin II–mediated release of aldosterone. Large doses of heparin can interfere with aldosterone secretion. The potassium-sparing diuretic spironolactone directly antagonizes aldosterone activity at the kidneys.

Decreased renal excretion of potassium can also occur as a result of an intrinsic or acquired defect in the distal nephron’s ability to secrete potassium. Such defects may occur even in the presence of normal renal function and are char-acteristically unresponsive to mineralocorticoid therapy. The kidneys of patients with pseudohy-poaldosteronism display an intrinsic resistance to aldosterone. Acquired defects have been associ-ated with systemic lupus erythematosus, sickle cell anemia, obstructive uropathies, and cyclosporine nephropathy in transplanted kidneys.

Hyperkalemia due to Increased Potassium Intake

Increased potassium loads rarely cause hyperka-lemia in normal individuals unless large amounts are given rapidly and intravenously. Hyperkale-mia, however, may be seen when potassium intake is increased in patients receiving β blockers or in patients with renal impairment. Unrecognized sources of potassium include potassium penicillin, sodium substitutes (primarily potassium salts), and transfusion of stored whole blood. The plasma [K+] in a unit of whole blood can increase to 30 mEq/L after 21 days of storage. The risk of hyperkalemia from multiple transfusions is reduced, although not eliminated, by minimizing the volume of plasma given through the use of packed red blood cell trans-fusions .

The most important effects of hyperkalemia are on skeletal and cardiac muscle. Skeletal muscle weak-ness is generally not seen until plasma [K+] is greater than 8 mEq/L, and is due to sustained spontaneous depolarization and inactivation of Na+ channels of muscle membrane, eventually resulting in paralysis. Cardiac manifestations ( Figure 49–6) are primarily due to delayed depolarization, and are consistently present when plasma [K+] is greater than 7 mEq/L. ECG changes characteristically progress sequen-tially from symmetrically peaked T waves (often with a shortened QT interval) → widening of the QRS complex → prolongation of the P–R interval → loss of the P wave → loss of R-wave amplitude → ST-segment depression (occasionally elevation) → an ECG that resembles a sine wave, before progres-sion to ventricular fibrillation and asystole. Contrac-tility may be relatively well preserved until late in the course of progressive hyperkalemia. Hypocalcemia, hyponatremia, and acidosis accentuate the cardiac effects of hyperkalemia.

Because of its lethal potential, hyperkalemia exceeding 6 mEq/L should always be corrected. Treatment is directed to reversal of cardiac manifestations and skeletal muscle weakness, and to restoration of normal plasma [K +]. Therapeu-tic modalities employed depend on the cause of hyperkalemia and the severity of manifestations. Hyperkalemia associated with hypoaldosteronism can be treated with mineralocorticoid replace-ment. Drugs contributing to hyperkalemia should be discontinued and sources of increased potas-sium intake reduced or stopped.

Calcium (5–10 mL of 10% calcium gluconate or 3–5 mL of 10% calcium chloride) partially antago-nizes the cardiac effects of hyperkalemia and is use-ful in patients with marked hyperkalemia. Its effects are rapid but short lived. Care must be exercised in administering calcium to patients taking digoxin, as calcium potentiates digoxin toxicity.

For patients with some renal function, furose-mide is a useful adjunct in increasing urinary excre-tion of potassium. In the absence of renal function, elimination of excess potassium can be accom-plished only with nonabsorbable cation-exchange resins such as oral or rectal sodium polystyrene sul-fonate (Kayexalate). Each gram of resin binds up to 1 mEq of K + and releases 1.5 mEq of Na +; the oral dose is 20 g in 100 mL of 20% sorbitol.

Elective surgery should not be undertaken in patients with significant hyperkalemia.  Anesthetic management of hyperkalemic surgical patients is directed at both lowering the plasma potassium con-centration and preventing any further increases. The ECG should be carefully monitored. Succinylcholine is contraindicated, as is the use of any potassium-containing intravenous solutions such as lactated Ringer’s injection. The avoidance of metabolic or respiratory acidosis is critical to prevent further increases in plasma [K+]. Ventilation should be con-trolled under general anesthesia, and mild hyper-ventilation may be desirable. Lastly, neuromuscular function should be monitored closely, as hyperkale-mia can accentuate the effects of NMBs.