Bimodal distribution with a peak in young adults (15–34 years) and older individuals (>55).

Infectious agents particularly Epstein Barr virus have been implicated. There is an increased incidence in pa-tients with HIV. There may be a genetic predisposition.

RS cells are a clonal proliferation of B lymphocytes arising from the germinal centres of lymph nodes. They do not produce antibodies. Some of the clinical manifestations are attributed to the production of cytokines. Oncogenes have been implicated in the pathophysiology, upregulation of bcl2 has been shown to be of prognostic significance.

Patients present with a painless lymphadenopathy most often within the neck. Fatigue, anorexia, pruritus and alcohol induced nodal pain may also occur. Involvement of mediastinal lymph nodes may cause cough, shortness of breath and chest pain. B symptoms may be present (fever >38◦ C, drenching night sweats, weight loss of more than 10% within 6 months). On examination there is lymph node enlargement, and hepatic or splenic enlargement. The staging of Hodgkin’s’s disease is according to the Ann Arbor system, which is suffixed by B if B symptoms are present and A if they are absent (see Table 12.8). 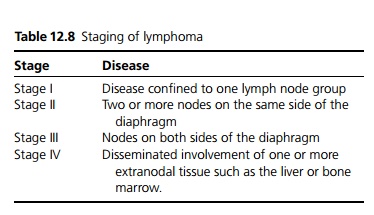 Classical Reed-Sternberg cells are large cells with a pale cytoplasm and two nuclei with prominent nucleoli said to resemble owl eyes. There are three main types of Hodgkin’s disease:

Treatment involves chemotherapy, involved field radiotherapy or a combination depending on the stage of disease, whether the disease is bulky (defined as a mass >5–10 cm or a mediastinal mass larger than one third of the chest diameter) and the presence or absence of B symptoms.