The causes of haemolytic anaemia are shown in Table 12.5. 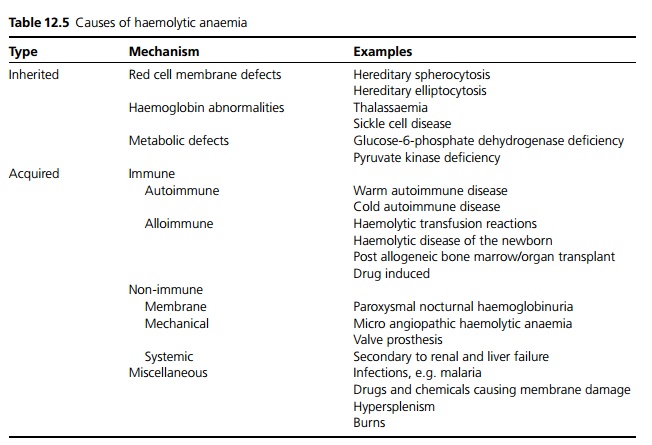 Shortening of the life span of red cells does not always cause anaemia. If the increased loss can be compensated for by an upregulation of the bone marrow (which can increase output between six and eight times) then a compensated haemolytic state will arise. In addition to bone marrow upregulation, reticulocytes (red cell precursors) may be released prematurely. Haemolysis can be divided into two categories:

Extravascular haemolysis: This is the more common type in which the red cells are removed predominantly in the spleen by macrophages.

Intravascular haemolysis: Red blood cells are broken down within the circulation releasing haemoglobin, which is scavenged by haptoglobin.

A chronically high serum bilirubin predisposes to the formation of pigment gallstones. Chronic haemolysis predisposes to folate deficiency and thus levels should be monitored and replacement given as required. Parvovirus infections that cause a temporary bone marrow failure may result in an aplastic crisis.

Haemolysis is suggested by a rise in bilirubin, high urinary urobilinogen (due to bilirubin breakdown in the intestine) and reduced plasma haptoglobin. In intravascular haemolysis, red cell fragments are seen in the blood film, whereas spherocytes may be present in extravascular haemolysis. The reduced red cell life span can be demonstrated using labelled red cells.

Haemolysis results in an increase in red cell production by the bone marrow, which is detected by a peripheral blood reticulocytosis.

There may be evidence of abnormal red cells depending on the underlying cause.