The gene for G6PD is carried on the X chromosome. There are over 400 structural types of the G6PD gene, it can therefore be considered to be a polymorphism rather than a defect. Differing isoforms have differing activity. The incidence of abnormal genes in some countries is so high that females may have two X chromosomes each with an abnormal G6PD coded. Random X inactivation (Lyonisation) means that some heterozygous females may also have symptoms. 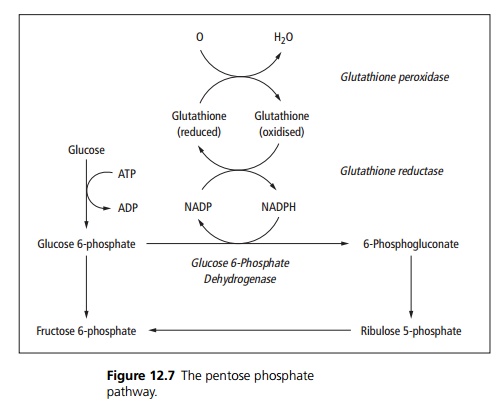 ·        Membrane oxidation and crosslinking of spectrin, which decreases flexibility and increases permeability of the red cell membrane.

·        Oxidation of haemoglobin to methaemoglobin; the globin chains then precipitate as Heinz bodies, which are removed from the red cells in the spleen.

With such a wide variety of genes and enzymatic activity, a spectrum of clinical conditions occur. G6PD deficiency is a cause of prolonged neonatal jaundice. The WHO classifies G6PD deficiency into two categories:

Class II and III: No chronic haemolysis but susceptibility to haemolytic episodes at times of high oxidant stress such as with infections or drugs, e.g. primaquine, sulphonamides, nitrofurantoin, ciprofloxacin, dapsone and naphthalene (mothballs).

After an oxidant shock the haemoglobin levels may fall dramatically with death following unless transfused.

During an attack the blood film may show irregularly contracted cells, bite cells (indented membrane), blister cells (cells in which haemoglobin appears detached from the cell membrane), Heinz bodies and increased reticulocytes. Between attacks the G6PD level can be measured.