Management of adult-onset diabetes is possible by taking insulin at regular time intervals.

Management of adult-onset diabetes is possible by taking insulin at regular time intervals. What would a diabetic patient do if enough human-insulin was not available? If you discuss this, you would soon realize that one would have to isolate and use insulin from other animals. Would the insulin isolated from other animals be just as effective as that secreted by the human body itself and would it not elicit an immune response in the human body? Now, imagine if bacterium were available that could make human insulin. Suddenly the whole process becomes so simple. You can easily grow a large quantity of the bacteria and make as much insulin as you need. Think about whether insulin can be orally administered to diabetic people or not. Why? Insulin used for diabetes was earlier extracted from pancreas of slaughtered cattle and pigs. Insulin from an animal source though caused somepatients to develop allergy or other types of reactions to the foreign protein. Insulin consists of two short polypeptide chains: chain A and chain B, which are linked together by disulphide bridges (Fig. 16). In mammals, including humans, insulin is synthesized as a pro-hormone (like a pro-enzyme, the pro-hormone also needs to be processed before it becomes a fully mature and functional hormone) which contains an extra stretch called the C peptide. This C peptide is not present in the mature insulin and is removed during maturation into insulin.The main challenge for production of insulin using rDNA techniques was getting insulin assembled into a mature form. In 1983, Eli Lilly an American company prepared two DNA sequences corresponding to A and B, chains of human insulin and introduced them in plasmids of E. coli to produce insulin chains. Chains A and B were produced separately, extracted and combined by creating disulfide bonds to form human insulin. 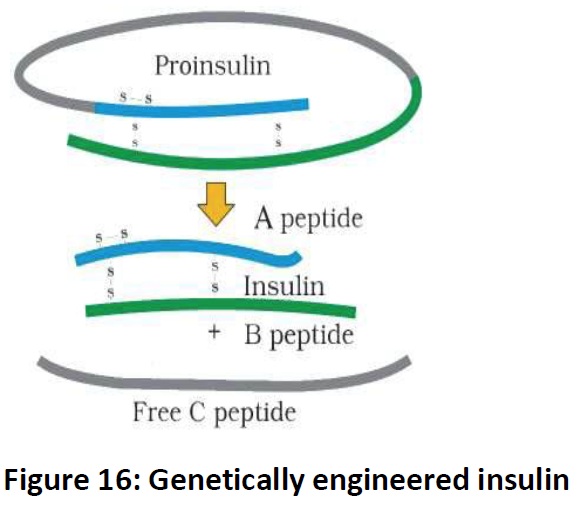