Now, we learn the formation of large numbers. Let us build and complete the number tower by observing the pattern of numbers.

Now, we learn the formation of large numbers. Let us build and complete the number tower by observing the pattern of numbers. 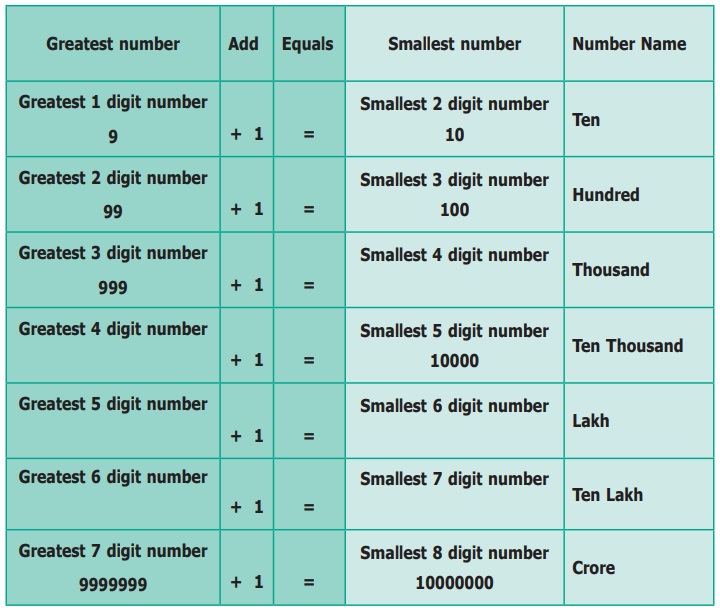 We can observe that in every row the smallest number column has an additional zero compared to the previous  row. You have read in lower classes about place value system. In this system (which was invented in India and spread to other countries!), the number 10 plays a very important role.

It is shown in the following table.

As the numbers get large, it is difficult to keep track of the number of digits and the place value for each digit. Wherever possible, we use names like lakh and crore instead of writing so many zeros. However, we can write exact values of large numbers too, if needed.

While each new row gives a number 10 times bigger, what happens if we skip and go 2 rows below. Numbers would be 100 times bigger.

1. Give 3 examples where the number of things counted by you would be a 5 digit number or more.

• No. of sq.feet area of forest

3. There are ten lakh people in a district. What would be the population of 10 such districts?

4. The Government spends rupees 2 crores for education in a particular district every month. What would be its expenditure over 10 months?

5. 10 lakh candidates write the Public Exam this year. If each exam centre is allotted with 1000 candidates. How many exam centres would be needed?