Paddy is the most important staple food crop of Tamil Nadu. Ponni and kichadi samba are the major varieties of paddy grown in Tamil Nadu.

Paddy is the most important staple food crop of Tamil Nadu. Ponni and kichadi samba are the major varieties of paddy grown in Tamil Nadu. Though it is cultivated all over Tamil Nadu, its cultivation is highly concentrated in Thanjavur, Tiruvarur, Tiruvallur, Kancheepuram, Villupuram, Cuddalore and Tirunelveli districts. It ranks third in the production of rice among the states of India. The deltaic region of river cauvery (the undivided Thanjavur district) is the major rice-producing region of Tamil Nadu. So, this region is rightly called as the "Granary of Tamil Nadu." 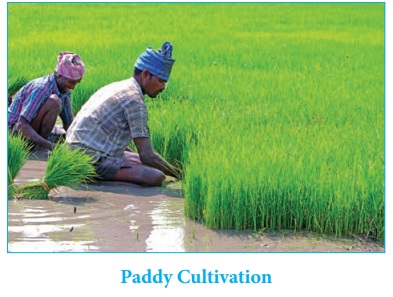 The Tamil Nadu Rice Research Institute (TRRI) is an Indian research institute working in the field of rice under Tamil Nadu Agricultural University (TNAU).It is situated at Aduthurai, in Thanjavur district, it was established in April, 1985 in TNAU to meet the research requirements of the region with the help of existing Agricultural Colleges and Research centres and perform lead function for rice and rice based cropping system research.

Millets form staple food of nearly one-third of human population of Tamil Nadu. Sorghum/jowar (cholam), ragi (kezhvaragu) and bajra (kambu) are the major millets. These are grown not only in drier areas but also in the coastal plains. Sorghum is grown in the Coimbatore plateau and Kambam valley. Ragi is grown in Coimbatore, Dharmapuri, Vellore and Cuddalore districts. Bajra is mostly cultivated in Ramanathapuram, Tirunelveli, Karur, Perambalur and Salem districts.

Pulses are the major source of protein. Bengal gram, black gram, green gram, cowpea and horse gram are the important pulses grown in Tamil Nadu. Pulses are grown in a wide range of climatic conditions mostly in drier regions with or without irrigation. Mild cool climate and a low to moderate rainfall are best suited for these crops. Pulses serve as excellent fodder. Pulses are grown in almost all districts in the state except Chennai, Nilgiris and Kanyakumari. Coimbatore leads in the production of Bengal gram. Vellore and Kanyakumari districts produce red gram.

Tiruvarur, Nagapattinam and Thoothukudi districts are the principal producers of green gram and black gram. Horse gram is widely cultivated in Dharmapuri and Krishnagiri districts.

Groundnut, gingelly castor, coconut, sunflower and mustard are some of the oilseeds that are grown in Tamil Nadu. Apart from its use in food preparation, it is used in industries as a lubricant, in the manufacture of varnish, soaps, candles, cosmetics and pharmaceuticals. Groundnut is the major oilseed of the state. The cultivation of groundnut is mostly concentrated in Vellore, Tiruvannamalai, Villupuram, Salem and Pudukottai districts. It is also grown to some extent in Dharmapuri, Cuddalore, Perambalur and Madurai. Erode, Ramanathapuram, Sivagangai and Virudhunagar districts are its minor producers. Coconut is grown in Coimbatore, Thanjavur and Kanyakumari districts.

It is one of the major cash crops of the state. It is an annual crop. It requires high temperature and heavy rainfall. It grows well in the tropical region. Major sugarcane-producing districts are Tiruvallur, Kancheepuram, Vellore, Cuddalore, Tiruchirapalli, Coimbatore, Erode and Tirunelveli.

Cotton is a fibre and cash crop. It requires black soil, long frost-free condition and warm and humid weather for its cultivation. Humid weather in the early stages and hot, dry weather during harvest period is suitable for this crop. It is predominantly cultivated in Coimbatore plateau and Vaigai-Vaippar river basins. It is also cultivated in Madurai, Ramanathapuram, Virudhunagar, Tirunelveli, Thoothukudi, Salem and Dharmapuri districts.

Tea, coffee, cashew, rubber and cinchona are the major plantation crops of the state. Tamil Nadu ranks second in area and production of tea in India next to Assam. Tea plantations are found in the hills of the Nilgiris and Coimbatore. The Nilgiris is the notable regions for tea plantations. Coffee plants are grown in the hills of Western Ghats as well as Eastern Ghats. It is also found in the hilly slopes of Dindigul, Madurai, Theni and Salem districts. Yercaud, Kolli Hills and Kodaikanal are notable for coffee plantations. Tamil Nadu stands second in area and production of coffee next to Karnataka. Rubber plantations are significant in Kanyakumari. Pepper is confined to the warm and wet slopes of Eastern and Western Ghats of Tamil Nadu. Cashew is extensively cultivated in Cuddalore district. 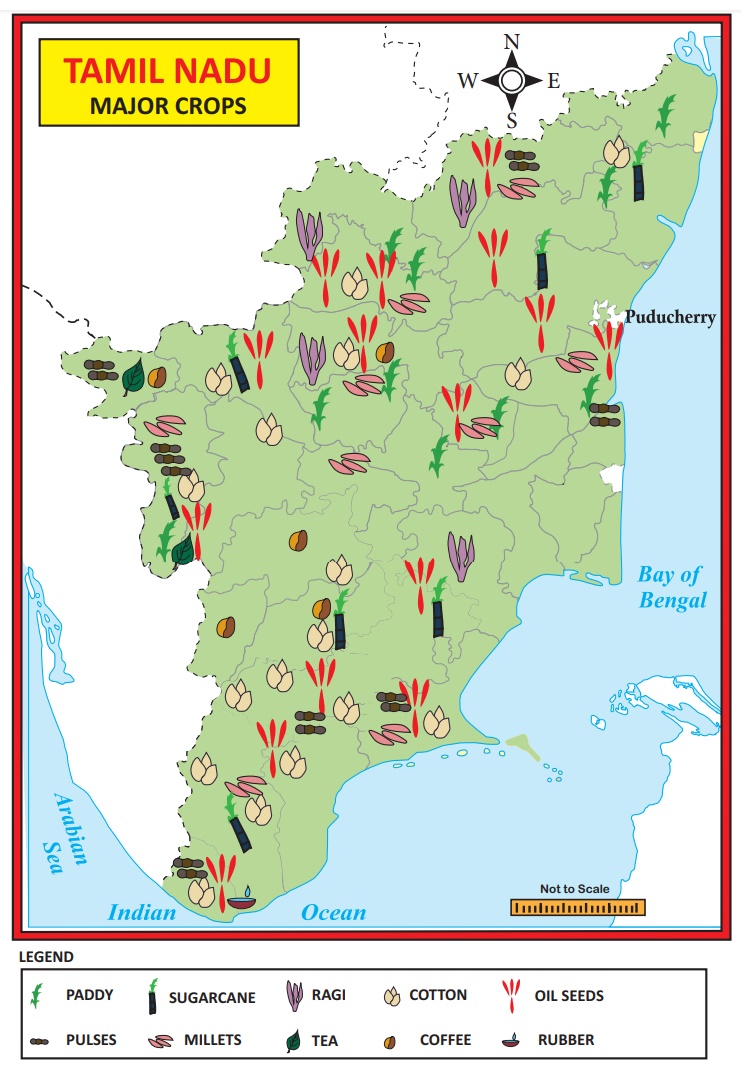